Down 4-0, Cardinals start feeding frenzy at the plate 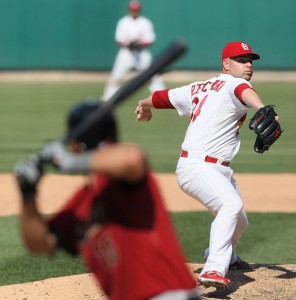 ST. LOUIS — No matter how deflating last weekend’s series loss to the Pittsburgh Pirates, no matter how bad the math regarding the NL Central race, the Cardinals always knew they had the Houston Astros in their pocket.

A team of historically inept proportions, the Astros completed their three-day tour Thursday as warm-up act for the defending world champions’ 10-game road trip to Cincinnati, Pittsburgh and Washington. For more than three innings the Cardinals did plenty to make things interesting for the smallest crowd, 30,343, in new Busch Stadium’s history. Ultimately, both squads reverted to form and the Cardinals secured an unsightly 13-5 win.

“This team (smells) blood in the water and they can pile them on,” said manager Mike Matheny.

The Cardinals found offense on a day when starting pitcher Jake Westbrook needed the help. In doing so they completed a three-game sweep and turned rookie lefthander Dallas Keuchel’s potential career day into a nightmare.

Trailing 4-0 entering the bottom of the fourth inning, the Cardinals awoke on third baseman David Freese’s three-run home run, then overwhelmed Keuchel, a slipshod defense and reliever Hector Ambriz with a five-run fifth.

“We needed a win,” said left fielder Matt Holliday, who contributed two hits and four RBIs, including a three-run double that put the Cardinals ahead in the fifth. “We had a chance to beat a team that’s not playing very well. You’ve got to do it.”

The uprising papered over Westbrook’s uncharacteristic five-inning start, which included five earned runs built atop six hits, two walks and two hit batters. A model of consistency for much of the season, Westbrook never found a rhythm against a lineup comprising call-ups and castoffs.

“This is what you’ve got to do. If you want to make it to the playoffs, you have to beat teams like the Astros and Cubs,” Holliday said. “Not just beat them two out of three; but especially at home we’ve got to sweep these series.”

The Astros, 39-86, suffered their seventh consecutive loss and fell to 4-16 this month. They have won consecutive road games (April 25-27) one road series this season.

The Cardinals completed a 6-3 home stand before departing on a telling tour against three teams with winning records, including the league’s top two.

The Cardinals managed only one hit through 3 2/3 innings before rising up for 16 more within their next 13 outs.

Holliday has emerged from a six-for-50 slump that briefly took his average below .300. Freese enjoyed his first three-hit game since July 26 and began to turn what had been a 12-for-69 month that included only three extra-base hits. Beltran remains in a seven-for-40 skid but insists his hand discomfort has dissipated greatly.

“If we can get Carlos going and me and David get rolling, the middle of our lineup can accomplish a lot,” Holliday said. “We can throw out some punishment.”

“I haven’t felt good for a long period of time all season,” Freese said. “I’ve been battling all year. But I like where I’m at right now. I like where the team’s at; I like going into this road trip confident.”

“We know what we can do,” said Craig, who hit safely in his final three at-bats. “We’re at our best when we take the approach of being patient and taking what the pitcher is giving us and having good at-bats. It sounds like a broken record, but that’s how it works. We’re at our best when each guy isn’t trying to carry the offense all by himself.”

The Astros managed only eight hits and two runs in the series’ first two games. They used the mix of Westbrook’s imprecision, two early infield errors and several elusive ground balls to take a 3-0 lead after two innings.

Keuchel (1-6) entered the start with more walks (28) than strikeouts (25) this season; however, he threw only nine balls among 36 pitches through 3 2/3 innings.

The game fell upon the Astros’ 2009 draft pick in the fourth inning when Freese followed a walk and catcher Yadier Molina’s ground-rule double with the Cardinals’ first home run in eight days. Freese’s homer came within a nine-hitter span that transformed a 4-0 deficit into a 8-5 lead and a jagged win for Westbrook (13-9), who allowed as many earned runs Thursday as in his previous 21 1/3 innings combined.