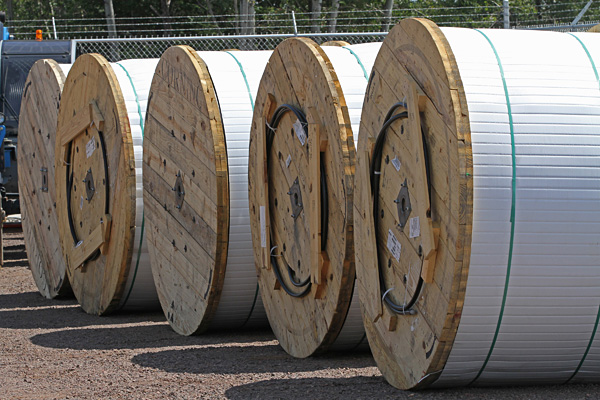 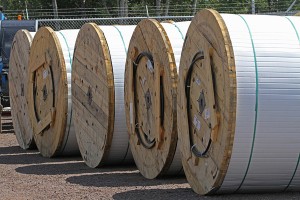 But they didn’t want anyone else to build a system, either.

That would mean competition in small parts of the county they already serve, even if it would leave thousands of northeastern Minnesota residents and businesses without broadband.

(PHOTO: Giant rolls holding fiber optic cable are stored at a Lake Connections construction yard, waiting to be installed as a part of a broadband project in northern Minnesota, July 31, 2012.)

So in 2010, when Lake County applied for federal stimulus funds to build a countywide network, it ran straight into a challenge from industry giant Mediacom and the Minnesota Cable Communications Association.

The conflict that ensued is part of a national struggle. Public officials and some of their constituents argue that rural broadband is like rural electrification: It’s a lifeline for small-town America that the free market will not extend.

“We’ve been ridiculously underserved in this area for years,” said Andy Fisher, who owns a Lake County bed-and-breakfast and a rural cross-country skiing lodge. The cable companies “are working in the interest of their profits. But if they’re not going to serve this area, what are we going to do?”

Cable and Internet providers argue that government-backed programs should run broadband only into unserved areas, not locations where private providers already operate. They have lobbied extensively to cut broadband initiatives from the federal budget.

“Lake County wants to make this into a David and Goliath story, where Mediacom is Goliath and poor little Lake County is David,” said Tom Larsen, Mediacom’s group vice president of legal and public affairs. “The truth is we’re David because we’re fighting (the government). It’s just the same story repeated all over the country.”

After two years, the battle in Lake County grinds on, with Mediacom charging that county officials illegally inflated statistics, U.S. senators improperly meddled to keep the project alive and the U.S. Department of Agriculture neglected its duty.

County officials, the senators and the USDA deny those claims, and an inspector general’s investigation found them to have no merit. Yet the fight has moved from the rural shores of Lake Superior to a hearing room on Capitol Hill. It shows no signs of ending, even as Lake County begins to run fiber-optic cable.

Ron Brodigan, who owns a rural resort and a school for building with logs and chairs the Stony River Township (Minn.) Board, said the same loans and grants the county got were available to the private companies, “but they were too stubborn to apply.”

“They would rather bitch about what the county is doing,” he said.

Economics are at the center of the debate, since both sides acknowledge that running broadband exclusively into remote areas won’t pay for itself.

Opponents of the Lake County project point to Monticello, Minn., which just had to renegotiate with lenders because it could not cover broadband bond payments.

With a population of fewer than 11,000 in Lake County, Two Harbors City Council Member Mary Rosati fears something similar. “I will be very surprised if they can pay back the loan,” said Rosati, 71, who describes herself as “an analog mind in a digital world.”

“Most of the people in Two Harbors are elderly,” she said. “Who’s actually going to buy this service?”

One person who might is Two Harbors resident and jewelry maker Beth Kringle, assuming she could get a better deal than the $50 a month she’s been paying Frontier Communications. “I think Frontier could use a little competition,” Kringle said.

Likewise, the promise of a new fiber network persuaded Michael Stiff and his wife, Darci, to move their business, Hybridge Imaging, from Duluth to a spot just outside Two Harbors, where they prefer to live.

This is part of what the fiber project can yield, said Lake County Commissioner Paul Bergman. Computer data storage facilities — the “cloud” — have expressed interest in coming to Lake County when bandwidth increases.

Mediacom and other Lake County cable providers serve only a few thousand customers in the county’s two biggest cities. Many county residents say they need better technology to survive.

On June 20, a fiber-optic line broke during flash flooding. For 13 hours, all land-line and cellphone service, including 911 as well as Internet, disappeared from much of Lake County.

It was the second big outage in about two years. Business and government leaders say it was a jarring reminder that they need a system like the one the county is putting in, with “redundant” lines to continue service when one line breaks.

Robert Ryan, president of Odyssey Development and Resorts, said nearly all his guests expect to use devices that access the Internet. Currently, that’s not possible.

“We have spectacular units,” Ryan said. “We have great sights. We have great food. But with our (limited broadband), they come up, and we have to start apologizing.”