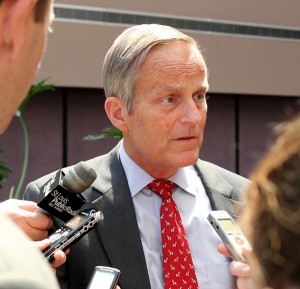 The call reportedly came earlier this week before Akin announced his decision to continue his bid.

On NBC’s “Today” Show Wednesday morning, Akin said he told Ryan he would look at the matter seriously, then make a decision.

“It’s not about me,” Akin said. “It’s about trying to do the right thing and standing on principle.”

He told Matt Lauer that he’s staying in the race because “I believe that America is at a crisis point right now, and it’s extremely important that the voters have a choice of someone who is completely opposite of Claire McCaskill,” the Democratic incumbent he’ll fact in November.

Akin said he doesn’t feel alone in his candidacy because he said voters stood with him on Aug. 7 when he won a tough primary over businessman John Brunner and former state treasurer Sarah Steelman.

“That was a decision made by the citizens of our state and not politicians,” Akin said.

The six-term congressman repeated his statement that no rape is legitimate and that “it’s a heinous crime.”

He said he was misinformed about a rape victim’s ability to ward off pregnancy — the comment on a St. Louis TV station Sunday that got him in so much hot water.

“The fact of the matter is I think that anybody doing a lot of public speaking can make a mistake. They knew I wasn’t perfect.”

Akin said he does not believe that a lot of women lie to gain access to an abortion.

“This is not about me,” Akin said of his campaign. “It’s not about my ego. But it is about the voters of the state of Missouri. They’ve chosen me because of the principles I stand on.”