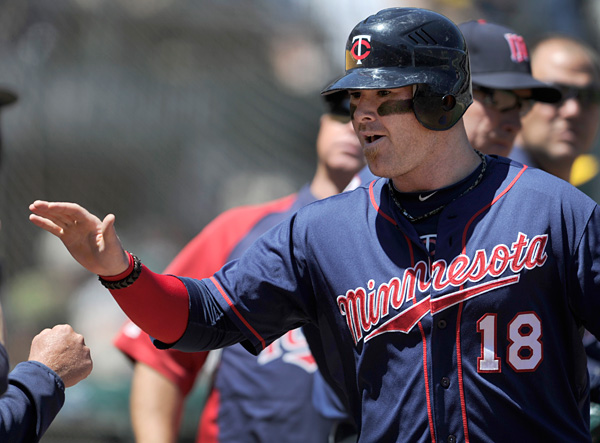 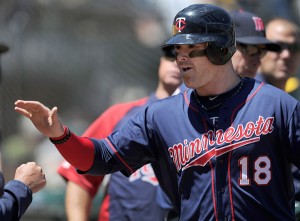 OAKLAND, Calif. — The good news is that Twins righthander Liam Hendriks identified a mechanical flaw during his outing on Wednesday and made the adjustment.

The not-so-good news? It was when he made the adjustment.

“It was during Chris Carter’s at-bat in the fifth,” Hendriks said.

Carter was Hendriks’ final batter of the day.

(PHOTO: The Minnesota Twins’ Ryan Doumit (18) is congratulated by teammates as he scores in the second inning against the Oakland Athletics at O.co Coliseum in Oakland, California, on Wednesday, August 22, 2012. The A’s topped the Twins, 5-1.)

Hendriks exaggerated the point that he found a little bit of a groove near the end of his outing on Wednesday, but he still wasn’t up to par as Oakland whipped the Twins, 4-1, to take two of three games in the series and send the Twins to a season-worst 21 games under .500.

Hendriks, making his first start for the Twins since July 2, gave up four runs over five innings on six hits and three walks with two strikeouts.

“He competed,” Twins manager Ron Gardenhire said. “He didn’t let the innings get too out of hand. He gave up a few runs here and there. But you have to be a little bit better than that with the strike zone and work ahead of more hitters.

“But like I said, he competed. He got out of some jams he created for himself, so there’s a step in the right direction.”

Oakland got an RBI single from Josh Reddick in the first to open the scoring. The Twins scored their only run of the game in the second, on Drew Butera’s groundout. Yeonis Cespedes hit a two-run single in third, and the A’s never looked back as they moved to a season-high 11 games over .500.

Hendriks can do his part to help the Twins avoid the century mark — and improve his candidacy for next year’s rotation — if he can finish strong.

“This was a little bit better,” Hendriks said. “I was attacking guys and wasn’t given a lead and then blowing it. It was just one of those days where I needed to keep us in the game and it was unfortunate I could only last five. I was at least happy to get through the fifth, which I didn’t last time (I started).”

Lefthander Tommy Milone held the Twins to two hits over eight innings to improve to 10-9 for the season.