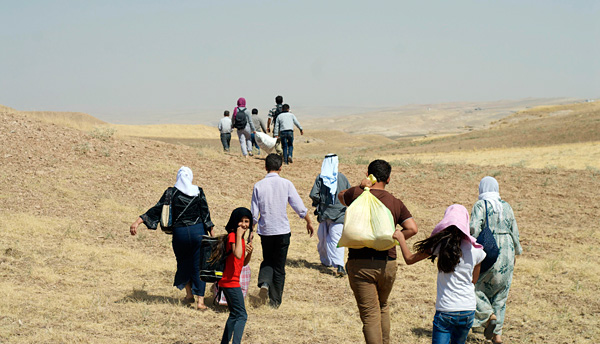 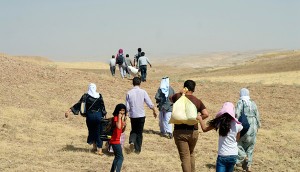 NEAR FAYSH KHABUR, Iraq — The 20 refugees who walked across the border from Syria refused to go back.

“We have to ask our captain,” said one of the soldiers, who insisted that the group of Iraqi and Syrian Kurds who waited hours on the Syrian side of the border to make the trip turn back. They had already walked for about half an hour in 100-degree-plus heat across wheat fields cut and baking in the afternoon mid-August sun.

The group didn’t wait to be invited into the shade of the soldiers’ tent, pushing past them with their bags.

“There is no way I’m going back to Syria,” said one young man as he strode ahead of the rest of the group, dragging a rice sack full of belongings. “Iraq or death.” 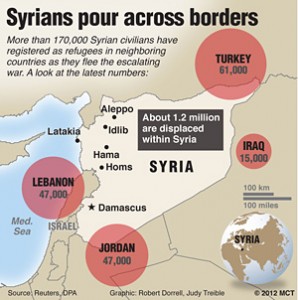 Assisted as they crossed into Iraq by the PKK, a Kurdish rebel group that operates in northern Iraq and northern Syria, the group had hoped to avoid the soldiers, who said they had orders to turn all refugees crossing illegally back to Syria.

“These are orders from Maliki,” one of the soldiers said, referring to the Iraqi prime minister, Nouri al Maliki.

But the soldiers, who were also Kurdish, clearly sympathized with the refugees, who included children, elderly men and women, and one woman carrying an infant. After about 10 minutes of negotiation with the group and a phone call to their captain, who reiterated the order to turn the refugees back, the soldiers relented.

“Go in groups of two and three,” one of the soldiers said after allowing the refugees to fill bottles with cold water from the soldiers’ supply.

Thousands of Syrians have crossed into Iraq legally and illegally as the violence there has worsened. A spokesman for Iraq’s Kurdish regional government said that more than 10,000 people have fled Syria to northern Iraq in recent months, and more than 4,000 Arab refugees have entered Iraq’s western Anbar province through the border crossing at Al Qaim, the Syrian side of which is now in control of the rebels battling the Syrian government.

Though the Al Qaim crossing remains open, Iraqi officials said other crossings with Syria have been closed, though they blame that on the Syrian government refusing to let refugees leave Syria. The Syrian government indeed has frequently prevented its citizens from fleeing through official crossings.

Though the Iraqi government has promised freedom of movement for Syrians entering Anbar, they for now have been confined to schools. A camp is being built in anticipation that they will not return to Syria soon and that more will come. Some refugees say their requests to return to Syria have been denied.

“Everyone was being targeted in Abu Kamal by the Syrian army. Even if you stay in your home, you can be killed,” said a 46-year-old who used the name Abu Hassan, referring to fighting in the Syrian city closest to the border crossing. “I came to Iraq because I have family here. Many of us from Abu Kamal have family in Al Qaim. I registered my name and the name of my family to get to stay with them, but none of us can. We are prisoners.”

In Jordan, similar issues of restricted movement in Syrian refugee camps led to violence near that country’s border with Syria earlier this month, as Syrians rioted in protest of miserable conditions in Zaatari, a desolate, windswept camp in Jordan’s northern desert.

Iraq’s government has continued to support the government of Syrian President Bashar Assad, whose Allawite sect, an offshoot of Shiite Islam, is allied with Iraq’s Shiite-led government. The vast majority of those fleeing Syria are Sunni Muslims.

The United Nations High Commissioner for Refugees has begun initial assessments of the situation for Syrian refugees in Iraq, registering more than 15,000 of them as of Friday. The agency has said there are more than 150,000 Syrian refugees in Iraq, Lebanon, Turkey and Jordan, though the number that have fled to those countries almost certainly is higher, as many do not register with the U.N. either because they don’t need assistance or they are afraid of identifying themselves.

Despite Iraqi policy to turn back would-be refugees, thousands have made the crossing, especially from Syria’s majority Kurdish province of Hasaka to Iraq’s semi-autonomous Kurdish north, where they are granted six-month visas and allowed to live where they wish.