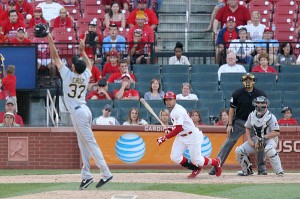 ST. LOUIS — Whether it was the galling lack of offense or a misplayed bunt, the zero-for-15 afternoon from two All-Stars or the mistakes by a rookie lefty reliever, the sum of 6 hours, 7 minutes of baseball Sunday at Busch Stadium for the Cardinals was a distressing loss.

And still they came away with one significant gain.

Hours before the Cardinals blinked first and lost 6-3 to the Pittsburgh Pirates in 19 innings, starter Jaime Garcia made an emphatic return from the disabled list. Garcia set a career high with 10 strikeouts and did not allow an earned run through eight innings. He kept the Cardinals in the game longer than the offense deserved, and 11 innings after he departed a 2-2 game those missed opportunities caught up with them.

“I don’t know if it can be any more disappointing,” Cardinals manager Mike Matheny said.

“A huge win,” Alvarez said on the other side. “Gives you a rush of energy.”

The victory kept the Pirates unbeaten in four extra-inning games this season and gave them a new foothold in the standings. After losing six of its previous eight games, Pittsburgh (67-54) took the three-game series from the Cardinals (65-56) and riveted them into third place, two games behind second-place Pittsburgh in the National League Central and wild-card race. The Cardinals were unable to pass the Bucs because of another extended power outage. The Cardinals remain the league’s leading offense in runs scored, average, on-base percentage, and inexplicable stretches of ineffectiveness that lack all three.

The Cardinals and Pirates traded runs in the 17th to continue extra innings Sunday and underscore how evenly matched they were in a taut, crisply played series. Through the first 36 innings against each other this weekend, the two teams had each scored nine runs. The Cardinals’ inability to capitalize on earlier opportunities cost them late. David Freese and Matt Holliday combined to go hitless in 15 at-bats. With starter Jeff Karstens and a parade of relievers, the Pirates went one stretch retiring 22 of 24 Cardinals. Carlos Beltran’s two-run double in the fourth gave the Cardinals their only lead of the game, and he was their last player in scoring position until he got to second base in the 14th inning.

Beltran stole three bases after the 14th but didn’t score partially because the Cardinals could not produce a hit in seven extra-inning plate appearances with a runner in scoring position.

The step back in the standings has the potential to be fleeting.

The return of Garcia has the potential to assure that.

When last Garcia pitched in the majors, he left the Cardinals with only questions. On Sunday, he offered a revelation. The lefty, who went on the disabled list in June with a shoulder injury after a series of starts with diminishing performance, was more assertive in the first inning that he had been in any inning of his final starts. He struck out three consecutive batters after a leadoff single in the first. By the end of the fifth inning, he had a 2-0 lead, and he had struck all but two batters in the Pirates’ lineup at least once.

Garcia was “filthy on us early, and he was pitching good all day,” Bucs manager Clint Hurdle said.

“I feel like a different guy than before,” Garcia said.

He looked like the pitcher who, as Schumaker said, “is a huge piece of our puzzle here.” Matheny allowed him to power through the eighth inning, and the lefty completed his game with a strikeout of Jose Tabata. Matheny said he “liked the way the ball was coming out of his hands, how nasty his stuff was.” What cost Garcia two runs (both unearned) wasn’t his pitching, but his fielding.

A combination of two bunts, one sacrifice fly, a single, and a fielding error by Garcia led to the Pirates’ first two runs. Karstens bunted the ball back to Garcia, and the lefty’s eagerness to get off a throw cost him the out. Three batters later McCutchen tied the score at 2-2.

Garcia’s return to the rotation moved rookie Joe Kelly to the bullpen, where he was ready Sunday as long relief. Garcia’s strength through eight kept Kelly alive for extra innings. He was essential, pitching 5 2/3 innings. An infield single off reliever Marc Rzepczynski’s glove tagged Kelly with a run in the 17th, but the Cardinals answered with Tony Cruz’s sacrifice fly in the bottom of the inning to keep the game pushing toward 6 hours.

Alvarez essentially ended it with his 23rd homer.

In the end, the teams used 44 of the 50 eligible players. A total of 16 pitchers combined to throw 574 pitches. Wandy Rodriguez, a starter, scored his first win since Pittsburgh acquired him from Houston. And at least one concessions stand had run out of hot dogs, leaving only ice cream, soda and nachos to sell.

The loss left a hollowness.

“I think it hurts a little bit more because were out there for six-plus hours and we just didn’t come out on top,” infielder Daniel Descalso said. “We had a lot of chances up there. … Any time you’re out there for 19 innings it probably stings a little more than usual.”

0 0 votes
Article Rating
Subscribe
Login
0 Comments
Inline Feedbacks
View all comments
PrevPreviousEli Manning lets others make noise as he quietly works to get even better
NextStats, lineups, impressions from Iowa scrimmage No. 2Next