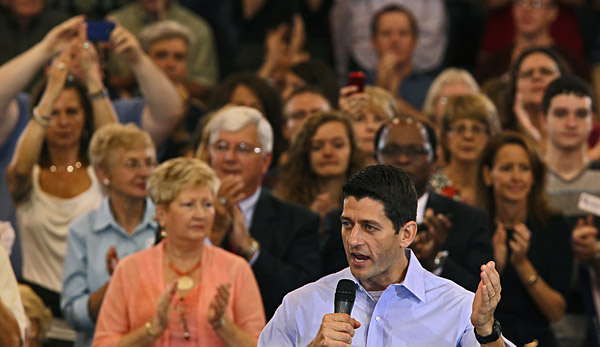 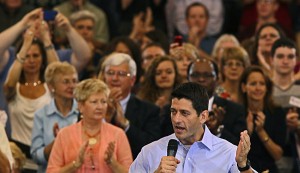 By Daniel Malloy, The Atlanta Journal-Constitution –

OXFORD, Ohio — Multiple glowing introductions preceded Paul Ryan before he jogged onto a platform amid thousands of cheering fans at his alma mater, but he had one particular concern.

A few minutes later at the Wednesday event came the U.S. House Budget Committee chairman’s brash side: “The president, I’m told, is talking about Medicare today. We want this debate. We need this debate. And we will win this debate.”

Romney and Ryan jaunted separately through Ohio in their first week as the presumptive GOP ticket. It is a state crucial to their hopes of defeating President Barack Obama, as no Republican ever has captured the White House without it.

But Ohio — like its swing-state cousin Florida — is packed with seniors who might be concerned by Ryan’s proposal to convert Medicare into a voucher system for future beneficiaries.

“I think there’s a net positive (for Romney), but there are some downsides,” said John Green, a political science professor at the University of Akron.

“Ryan inevitably raises the issue of entitlement programs, and that’s an issue for senior citizens in Ohio,” Green said. “Who knows exactly how that will play out, but historically those are not good things to raise in general elections in Ohio — whether you’re a Democrat or Republican.”

Ryan’s vision of cutting government and his deft way of articulating it have attracted renown among tea partyers, yet many in the large crowds that met Romney and Ryan in southern Ohio were not familiar with the seven-term Wisconsin congressman.

“I don’t really understand it,” Molly Plymale, 72, of Gallipolis said of Ryan’s “Path to Prosperity” budget, versions of which have passed the House the past two years but failed in the Democratic-controlled Senate.

“I do know we’ve got to do something,” she said. “We’re probably going to go broke.”

Those who had followed Ryan’s career were pleased with Romney’s choice.

“We know he’s energized this campaign like crazy in the last few days,” said Julie Lonsberry, 67, of Oxford. “Mitt Romney needed this, someone with gusto.”

The pick also ignited Obama’s faithful. Several gathered at an Obama campaign office in Chillicothe hours before Romney spoke outside the county courthouse, painting protest signs and airing their distaste for Ryan.

“The direction that Romney and Ryan will take the country, it seems like we’re at a crossroads where we can continue being an America where we care about each other or we can go (with) this Ayn Rand stuff where the people who have the muscle can abuse the people who don’t,” said Tom Harker, 67, referring to the philosopher and author of “Atlas Shrugged,” whom Ryan has praised in the past but more recently rejected as the promoter of “an atheist philosophy.”

Preliminary polling does not show that Ryan has significantly shaken up the race. A poll of swing states released Thursday by the nonpartisan Purple Strategies firm showed a “small bump” for Romney and the race in a dead heat. The pollsters note, though, that it is the first sign of Romney momentum in recent months. Gallup found a weaker immediate impact on the ticket’s poll numbers than any Republican vice presidential selection since 1996. (For perspective, Obama experienced a 2-point drop in his Gallup numbers after naming Joe Biden as his running mate.)

Romney and Ryan presented a contrast of styles on the stump.

In Chillicothe, Romney, using a teleprompter, laid out an economic plan that relied on repealing the 2010 health care law, relaxing environmental restrictions on coal and natural gas extraction, and cutting spending. He was at his most animated discussing what he labeled an “angry and desperate” campaign by the president.

“He demonizes some. He panders to others,” Romney said. “His campaign strategy is to smash America apart and then cobble together 51 percent of the pieces. If an American president wins that way, we all lose.”

The next day in Oxford, Ryan relied on written notes and stumbled a couple of times but generally seemed at ease. He prowled the stage, using call and response with the crowd and bantering about football. At one point, after a spectator yelled “I love you,” Ryan replied, “I love you, too, Mom.” Then he chuckled and added: “It wasn’t my mom, actually.”

His crowd Wednesday included many younger people, even though most Miami students were not back on campus yet for the fall semester. On Thursday, Ryan stopped at Walsh University in North Canton.

Cameron Egbert, 20, a Miami student, said younger voters who got behind libertarian U.S. Rep. Ron Paul of Texas in the Republican primary were drifting toward Romney — and Ryan’s energy can help seal them.

“I do think he will do a good job shedding the stuffy image” of Republicans, said Egbert, who brought along two friends typically apathetic about politics.

Older Republicans in the crowd shared that hope.

“For the sake of the youth who became Obama zombies in the last election, we need the youth to get invested,” said Mark Fabry, 51, of West Chester. “Paul Ryan has a chance to get in touch with that.”

Even though Ryan spent his college years in Ohio, many Buckeye State Republicans had hoped Romney would select U.S. Sen. Rob Portman of Ohio, who won election in 2010 by a landslide.

Dennis Eckhart, a Democratic consultant and former congressman from Cleveland, said there was a “sigh of relief” in his party when Romney announced his pick.

“There were many Democrats in the state that were calculating Portman was worth 1 or 2 (percentage) points,” Eckhart said, a spread that could make the difference in this tightly contested election year.

Columbus Republican consultant Terry Casey said Portman might have made an impact near his home in southwest Ohio, but Ryan has broader appeal.

“The potential — and it’s the potential with a question mark — is Ryan shifts the debate maybe to more substance and policy,” Casey said. “It could. But the question is will it shift to a real policy discussion or will he just be attacked.”