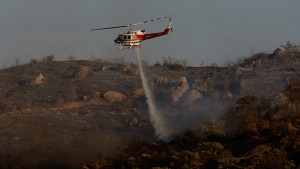 At least three structures, including one home, were destroyed by the blaze, which spread rapidly through dry brush and grasslands in a sparsely populated area south of Hemet and east of Temecula.

(PHOTO: A helicopter makes a water drop on a fast-moving fire in thick brush near the community of Aguanga, California, on Tuesday, August 14, 2012. The fire prompted mandatory evacuations in the area.)

The fire, just 5 percent contained as of Tuesday evening, was spreading rapidly through the rocky hills and desert scrub, and was within a mile of forest lands west of Anza, where drought has heightened fire danger all summer.

“Of course we’re concerned,” said John Miller, spokesman for the San Bernardino National Forest. “This year our big concern is the fact that rainfall — and that includes snow — for our forest was somewhere between 50 percent to 70 percent of normal.”

Mandatory evacuations were ordered in the sparsely populated area near Aguanga, and nine homes have been evacuated, according to Jody Hagemann of the California Department of Forestry and Fire Protection. Two firefighters suffered minor injuries, according to radio dispatch reports.

South of the Riverside County fire, fast-moving blazes, some started by lightning strikes from heat-born thunderstorms, have burned more than 2,300 acres in northeast San Diego County, leading to evacuations in the rural communities of Ranchita and the San Felipe area off California 78.

The four San Diego County fires are being fought by more than 500 firefighters, along with air tankers and water-dropping helicopters. No structures have yet been reported damaged.

“We have very dry vegetation, brush and grass and things like that. Now we have multiple days of very high temperatures,” said Chief Julie Hutchinson, spokeswoman for the state fire agency. “It’s like lighting your fireplace with a blowtorch.”

The fire in Riverside County was reported just before 1 p.m. in the community of Aguanga. More than 210 firefighters were working to extinguish the blaze, and six water-carrying helicopters and six water-tender aircraft as well as a DC-10 were assisting, state fire officials said.

Crews from the Sierra Nevada mountains areas are being dispatched to assist firefighters.

“That’s one thing that’s unique about California. We have a state fire agency, and we’re able to move resources up and down the state,” said Hutchinson, adding that crews from the U.S. Forest Service, local departments and the California National Guard are playing a role in the statewide firefighting efforts.

Although flames are more than 14 miles away from Idyllwild, residents and fire officials in the artsy mountain community have been nervously watching television news reports.

A decade ago, the Idyllwild area was considered one of the regions most susceptible to a catastrophic wildfire, but that danger was abated by aggressive efforts to clear dead trees along evacuation routes and vegetation around mountain homes, Lott said.

“Our forest is healthy and green. But there’s still danger,” Lott said.