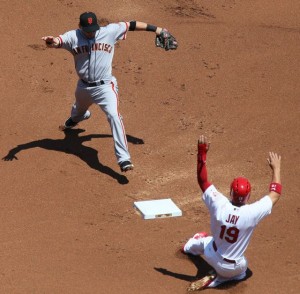 ST. LOUIS — There are veteran observers of the human experience who will say that Bo Derek was the only perfect 10. But, in a different time and on a totally different playing field, Adam Wainwright, Jon Jay and Carlos Beltran of the St. Louis Cardinals both found 10 to be a perfectly good number Thursday at Busch Stadium.

After a ghastly start to his season, his first after missing the 2011 campaign because of elbow surgery, Wainwright finally clawed his way to the .500 mark with a 3-1 win over the San Francisco Giants.

The victory was Wainwright’s third in a row and his 10th of the season to go with 10 losses. That Wainwright has achieved “respectability,” as he put it, was due in large part to the efforts of center fielder Jay, who turned in another highlight-reel catch besides a single and a double, scoring one run and setting up another.

Those two hits gave Jay 10 for the four-game series, as he had at least two in every game.

Beltran, in hitting his 27th homer of the season, reached 80 runs batted in. That total, which leads the National League, represented the 10th time in his career he had achieved 80 or more RBIs.

The number was more modest for reliever Mitchell Boggs, whose 23-game streak without allowing a run was snapped when he was called on to pitch the ninth inning of a blowout game on Wednesday and he was blown out himself by Marco Scutaro’s grand slam. Boggs has a one-game scoreless streak now, working a perfect eighth, ahead of Jason Motte’s hitless ninth, which netted the bearded righthander his 25th save.

“I was watching (on video) my first start against the Giants in San Francisco and I was just brutal,” said Wainwright, referring to a 7-5 loss on May 17, where three Cardinals errors hurt him as much as he hurt himself.

“Now I can see how bad I was. I went from being the worst pitcher in baseball to being respectable again.”

Wainwright’s ERA has dipped below 4.00 (at 3.90), another respectable achievement. “I’m confident I’m going to go out and win every game I pitch now,” Wainwright said.

Before, he said, “I tried trick myself into believing I was (confident) but, actually, I wasn’t.

“It’s really, really tough to pitch deep into games when you don’t have a located fastball and your fastball doesn’t have any life on it. And when your breaking ball stinks and your slider is flat. And your changeup (is lousy).”

Wainwright has reached 145 1/3 innings already. This winter, general manager John Mozeliak said the Cardinals didn’t intend to push Wainwright any farther than 180 innings after his operation. Washington’s Stephen Strasburg, another rehabber from Tommy John surgery, is said to have a 160-inning maximum.

“I really don’t have an opinion on that, because I think it’s silly,” Wainwright said. “I feel like I’m stronger at this point of the season than I’ve ever been. I don’t feel winded, in the least.

“They’re going to have to fight to take the ball out of my hand after 160 innings, I can promise you that. It’s not going to happen.”

Motte said he didn’t have any doubt that Wainwright would rebound.

“It’s not really a surprise to any of us that he’s able to do what he’s doing now,” said Motte.

Manager Mike Matheny said, “His last two starts have been the best execution of his fastball, without question. It’s been fun to watch these last two starts because that’s what he looks like when he’s really on top of his game.”

The switch-hitting Beltran provided much of the offense as he hit his eighth homer righthanded — his natural side — and eighth in the first inning this season when he connected for a 409-foot shot, just fair to left, off San Francisco lefthander Madison Bumgarner, a former teammate he was facing for the first time.

Beltran said he thought Bumgarner had made a good pitch and Bumgarner said, “It was pretty much right where I wanted to throw it. I didn’t think he’d keep it fair, but he did.”

Jay, besides his two hits, provided the defense, racing into right center to make a sliding catch on Scutaro’s drive in the fifth. The Giants scored their run on the sacrifice fly but Jay’s catch prevented a bigger inning.

“(Jay) is a great player,” said Wainwright. “And you can’t really speak enough of his defense. As a pitcher, you love to see that guy in center field because he can run down anything.”

Jay said, “I want my pitchers to have that confidence in me. It’s a good feeling when your teammates trust you.”

After Wainwright departed after 119 pitches, Boggs was able to put the previous night behind him. Matheny, almost apologetic for having to use Boggs in the 15-0 thrashing on Wednesday, said he was hoping to get the ball to Boggs again on Thursday.

“After last night, I expected to come in and do what I did today,” Boggs said. “That’s what I’ve been doing all year long. I feel I needed to bounce back and have a good outing and I did.”