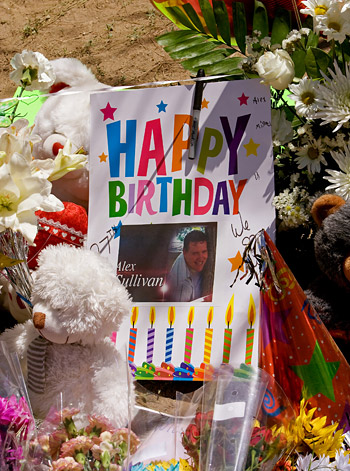 AURORA, Colo. — Officials said they believed that the major threat of explosions had been eliminated at the booby-trapped apartment of James Holmes, the suspect in the deadly movie theater shooting rampage.

They also released the list of the dead, which includes a 6-year-old girl, a mother of two small children, and several people who died trying to protect their loved ones and friends during the shooting.

(PHOTO: Items are left at a makeshift memorial in Aurora, Colorado, on Saturday, July 21, 2012, created for victims of a shooting at a theater late Thursday night.)

More than half of the dead named by the Arapahoe County medical examiner were in their 20s. Among them are a young sports journalist, a comic book fan celebrating his 27th birthday and a 6-year-old girl on a mother-daughter outing who died on the operating table.

Meanwhile, bomb experts worked throughout Saturday disabling at least one trip wire and explosive or incendiary devices designed to kill anyone who entered the Paris Street apartment where Holmes lived. Two small explosions could be heard while the delicate operation unfolded, in which care is being taken to preserve potential evidence.

“We believe we have eliminated the major threats there,” Aurora Police Chief Dan Oates said at an afternoon news conference. He added that there was still work to be done before police could move into the apartment to search for evidence.

“It went very, very well. The threat has not been completely eliminated; it has been significantly reduced,” James F. Yacone, the FBI special agent in charge of the Colorado and Wyoming region, told reporters. Anyone who would have opened the apartment door would have been seriously injured or killed, he said.

Oates said the apartment was rigged to kill and that most likely the first ones to enter would have been police officers. “You think we’re angry,” he told reporters. “We sure as hell are angry.”

Federal and local officers worked from first light to dismantle the traps at the apartment. About 2:15 p.m., firefighters equipped with oxygen tanks and face masks and armed with axes, chainsaws and sledgehammers entered the apartment building.

Witnesses said it was the first time they saw anyone enter the building. Earlier they had used robotic equipment to survey the 800-square-foot apartment and help dismantle a dangerous tangle of chemicals from about 30 aerial explosives and connecting wires to be used for detonation.

Oates said he expected officers to work through the evening. Residents of four evacuated adjacent apartment buildings were allowed to return at 4 p.m.

Holmes is being held by police in connection with the shooting after midnight early Friday in Theater 9 of the Century 16 movie complex in Aurora. Twelve people died in the attack and 58 were injured. More than two dozen remain hospitalized, with at least seven still listed in critical condition.

Authorities have removed moviegoers’ belongings from the movie theater, Oates said. Officials expect to complete their work at the crime scene by Monday and will allow defense attorneys into the area on Tuesday. By Wednesday, the theater could be returned to its owners, Oates said.

Holmes had legally purchased four weapons, including a shotgun, an assault rifle and two handguns, from local stores, authorities said. He also bought more than 6,000 rounds of ammunition on the Internet, along with a number of magazines, they said. Holmes had received a large number of packages at home and at school in recent months, suggesting that he had spent much time and effort to plan the attack, Oates said.

“We’ve become aware that he had a high volume of deliveries to both his work and home address. We think this explains how he got his hands on the magazine, ammunition,” he said. “We also think it begins to explain how he got the materials he had in his apartment.

“What we’re seeing here is evidence of some calculation and deliberation,” Oates added, making a point expected to be a key prosecution argument against Holmes. Holmes, 24, is scheduled to make his first court appearance on Monday.

Makeshift memorials have sprung up in Aurora, particularly in the parking lot of the movie complex where the latest Batman film, “The Dark Knight Rises,” had its local premiere after midnight early Friday when the shooting occurred.