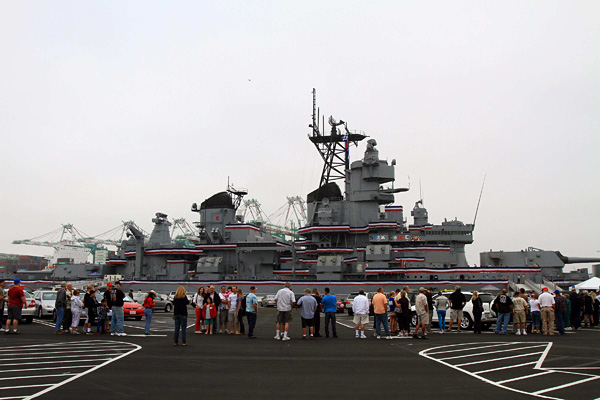 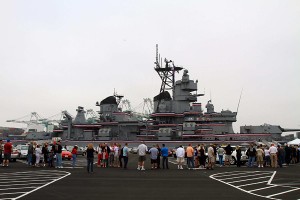 LOS ANGELES — The fearsome guns of the USS Iowa protected FDR from torpedo attacks and helped destroy the Japanese military in World War II. They shelled North Korea in the 1950s and patrolled the Central American coast during the Cold War.

On Saturday, with the grand opening of the country’s newest battleship museum in the Los Angeles community of San Pedro, the artillery that struck so much fear in America’s enemies got a new role: photo op.

(PHOTO: Patrons lined up early on Saturday, July 7, 2012, to visit the retired battelship USS Iowa, which opened to the public as a floating museum at the Port of Los Angeles in San Pedro, California, on Saturday.)

More than 3,000 people walked up the Iowa’s gangplank on its inaugural day and nearly every one seemed to want a photo with its 16-inch guns.

“I want them to be part of history,” said retired Marine Brian Tisdale of his two children, who he captured posing at the gun barrels.

Whether a snapshot on the Iowa deck will become as mandatory to a Southern California vacation as a picture in front of the Hollywood sign remains to be seen. Officials said they were pleased with the museum’s first day, especially given the breakneck pace of the project.

The opening came just a month after the Iowa, one of the largest battleships ever, arrived in Los Angeles’ harbor and just 10 months after the Navy selected San Pedro as the site of the museum. 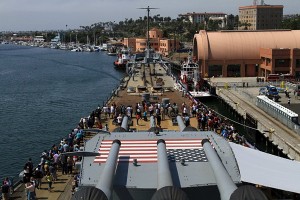 “It’s unheard of. It usually takes about three years,” said battleship enthusiast Robert Kent, who led the campaign to bring the Iowa to L.A. and now serves as director of the nonprofit that runs the museum, Pacific Battleship Center.

Built in 1940, the Iowa was an important part of the Navy fleet for five decades. It ferried Franklin Roosevelt to Casablanca during World War II and later the ship fought in the Pacific, sailing victoriously into Tokyo Harbor. The Iowa served in the Korean conflict and plied the Persian Gulf in the 1980s.

Only about 15 percent of the ship is currently open to the public. Visitors are funneled down a single route that passes through a wardroom where officers ate and relaxed, around the vessels upper decks and through the captain’s quarters that once hosted President Roosevelt.

Kent said additional renovations are ongoing and by 2015, there will be five different tours and about 95 percent of the ship will be open to the public.

Museum organizers have previously said they anticipated 450,000 visitors annually, but as he stood at the top of the gangplank Saturday, Kent said the goal was 200,000.

“That’s what we need to break even,” he said.

The crowd that began forming at 6 a.m. was festive, with many dressed in red, white and blue. Within minutes of the 9 a.m. ribbon cutting, the deck had already seen its first marriage proposal. Leticia Singleterry, of Downey, Calif., gave her longtime boyfriend, Alex Zuniga, a ring on the deck. He proposed to her last year on the beach in Venice, Calif., and she said she had been searching for the perfect spot to return the favor.

“I thought it was a great place for a male to get engaged. It doesn’t get any more tough than a battleship,” said Singleterry.

Many visitors had a military connection and some had served on the Iowa.

Morris, 83, a retired attorney, came with some of his children, grandchildren and great-grandchildren — more than 20 relatives in all — to see the ship. He recalled the celebration when the ship crossed the Equator on a cruise through the Panama Canal and the drudgery of swabbing decks and working in the ship’s boiler rooms.

More than a thousand people applied to be museum volunteers, Kent said, and some who chose to work opening day said they were excited to be part of preserving history.

“There are no more battleships like this and there probably never will be,” said Jim Holly, a Navy veteran and retired publishing executive from Rolling Hills Estates, Calif. “It’s an era that’s passed.”

As the day grew on and more people streamed onto the Iowa, visitors got a taste of some of the more unpleasant parts of military life — close quarters, boredom and physical discomfort. The narrow walkways became clogged, leaving the tour at a standstill, and the steep stairs between decks proved challenging for some elderly visitors who had to be escorted to an exit.

“It wasn’t handicapped accessible, but we didn’t expect it to be,” said Heidi Adler Palmer, of Torrance, Calif. Her 90-year-old father, Fred Adler, made it through without trouble and said he was bowled over by the design of the vessel.

“The engineering is a nightmare to me. I don’t know how they did it,” said Adler, a retired chef from Redondo Beach, Calif. “I was very impressed.”