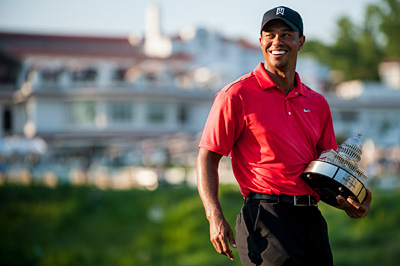 By Don Markus, The Baltimore Sun –

(PHOTO: Tiger Woods with the trophy on the eighteenth hole during the final round of the AT&T National at Congressional Country Club in Bethesda, Maryland on Sunday, July 1, 2012. )

Woods stumbled a little down the stretch when he made his first bogey of the weekend on the par-5 16th hole, but then watched as Bo Van Pelt followed with a bogey of his own and two more bogeys on the final two holes to give Woods a 2-shot win over Van Pelt and Adam Scott.

A 2-under par 69 Sunday gave Woods a four-round total of 8-under 276, eight shots higher than what McIlroy shot in winning last year’s U.S. Openon a course that played much softer and easier than it did during the recent spate of sweltering heat.

“I figured it was going to come down to probably the last five or six holes,” said Woods, who along with Van Pelt started the day one stroke behind third-round leader Brendon de Jonge, who faded with a 6-over par 77. “It ended coming down to the last three holes where the tournament swung.”

The victory, following a similar one in May at The Memorial and a 5-stroke runaway win at the Arnold Palmer Invitiational in March, was the 74th of Woods’ storied career, allowing him to pass Jack Nicklaus after tieing his fellow legend at Nicklaus’ tournament in Ohio.

“Well, I’ve had a pretty good career,” said Woods, who will now go after Sam Snead’s record of 82 PGA Tour wins, beginning with a tournament this week at Snead’s longtime course at The Homestead. “To do it at 36, I feel like I have a lot of good years ahead of me.”

Woods acknowledged that he heard the whispers last year and earlier this year that his career was in jeopardy and his days of dominance were in the past. There were even doubts about Woods — and there still might be until he wins his 15th major — when he faded on the weekend at last month’sU.S. Open.

“A lot of media people didn’t think I could win again, and I had to deal with those questions quite a bit,” Woods said. “It was just a matter of time. I could see the pieces coming together. Sean (Foley, his swing coach) and I were working, and we see what’s coming and we can see the consistency.”

Asked if his confidence had waned, Woods said, “Of course the confidence wanes because I wasn’t able to practice and I was hurt for a long time. When you’re changing (swings), and have a totally different release pattern, it’s going to take some time.”

Woods admitted that he is still working on his putting — he said that a tip before the tournament began from former Stanford teammate and PGA Tour pro Notah Begay helped him — but he is now able to shape the kind of shots he used to hit all the time.

A perfect example came on the par-4 18th. Leading by a stroke after he saved par on the par-4 17th and Van Pelt made a bogey, Woods hit a “nice hard fade” off the tee and said he then, “hit a nice little sweet draw in there into the green. It was good to be able to shape it both ways like that.”

A day after only a smattering of fans were allowed in because the maintenance crew was still cleaning up in the aftermath of Friday’s massive windstorm, a huge crowd celebrated along with Woods by the 18th green.

The victory means that there again will be talk about whether Woods is all the way back. It will continue into next month’s British Open, where Woods will try to overtake Englishmen Luke Donald and Lee Westwood, as well of Northern Ireland’s McIlroy, in the world rankings.

After this week’s tournament in West Virginia, Woods will return to Florida to get his game ready for England. Aside from the technical aspects that include hitting with lower trajectory to compensate for the wind, Woods will try to stay as focused as he seemed last week — and in his two previous wins.

Asked who the No. 1 player in the world is now, Van Pelt didn’t hedge.

“I’d have to say him,” Van Pelt said. “You know, no offense to any of those other guys, but he’s the only guy to win three tournaments on the tour this year, is that correct? On three different golf courses.”

Woods has now won the same three tournaments this year that he did in 2009 — when he ended up winning six events before his family life and career unravelled with his serial infidelity. Injuries then followed.

“That would be nice if I could get that same total with a couple of majors in there,” he said, flashing a smile.