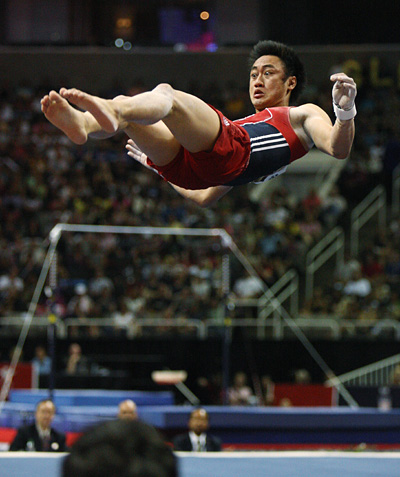 SAN JOSE, Calif. — Despite having a left ankle that is the color purple, 19-year-old Sam Mikulak couldn’t have been happier Sunday.

Mikulak, of Newport Coast, Calif., who did only one event in Saturday’s final day of Olympic qualifying to protect that ankle he had sprained in the vault Thursday, was one of three men named Sunday to round out the men’s Olympic gymnastics team.

(PHOTO: Glen Ishino performs a floor exercise during the final round of the 2012 U.S. Olympic Trails for men’s gymnastics at HP Pavilion in San Jose, California, Saturday, June 30, 2012.)

Jon Horton, a 2008 Olympian who helped the men’s team win bronze in Beijing and who won an individual silver medal on the high bar in those Games, and University of Oklahoma gymnast Jake Dalton will join automatic qualifiers Danell Leyva and John Orozco this month in London.

Mikulak, who finished first in Thursday’s first night of Olympic trials, said he spent a nervous Saturday night after his bad ankle kept him from competing in five of the six men’s events Saturday.

He said his name was the last announced Sunday.

“I can’t believe this is happening right now. So much hard work has gone into it. I’ve been dreaming about this moment for so long and for it to finally be here, I’m just super excited.”

Horton, 26, the only returning member from the 2008 team, had gone out of bounds on his floor exercise Saturday, his final event.

“I was a little stressed out just because I wasn’t too happy with how I finished up my meet,” he said. “I was a little nervous. I’m just happy the committee trusts me. I will be able to sleep well tonight.”

Mikulak had broken both ankles at a competition in Puerto Rico last year, and his left ankle swelled after his vault here Thursday.

Dalton, 21, who is from Reno, Nev., said, “It’s a dream come true. I think we were all stressing about it last night and this morning. It’s awesome the hard work has paid off.”