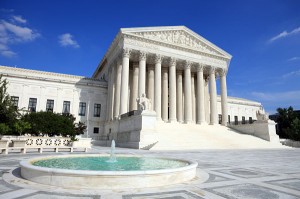 WASHINGTON — The Supreme Court on Thursday upheld nearly all of the Obama administration’s health care law, including its controversial requirement that compels most U.S. residents either to buy insurance or pay a fee.

In a landmark ruling that reshapes the legal, political and medical landscapes, the court said in a 5-4 decision that Congress had acted within its taxing power when it imposed the so-called individual mandate. The rest of the health care law likewise survives, save for some changes to a provision that directs states to expand Medicaid coverage.

“We do not make light of the severe burden that taxation, especially taxation imposed by a regulatory purpose, can impose,” Chief Justice John Roberts Jr. wrote for the majority. “But imposition of a tax nonetheless leaves an individual with a lawful choice to do or not do a certain act so long as he is willing to pay a tax levied on that choice.”

Three conservative justices who usually are Roberts’ allies, along with swing-vote Justice Anthony Kennedy, said the law went too far.

“In the case of the Affordable Care Act, Congress went to great lengths to structure the mandate as a penalty, not a tax,” Kennedy wrote for the dissenters. “But the majority now says that it is a tax, at least for the purpose of sustaining it.”

Roberts also combined with liberal justices to salvage part of a Medicaid expansion program, albeit in more limited form.

Flexing federal muscle, the law pushes states to cover residents who have higher incomes and also establishes new minimum coverage levels for Medicaid. States that don’t expand coverage to individuals with incomes up to 133 percent of the poverty line lose their federal Medicaid funds, under the law.

Although the federal government still will be picking up 90 percent of the additional costs, states complained that the threatened withholding of funds amounted to coercion that’s inappropriate for what’s supposed to be a state-and-federal collaboration. States receive more than $250 billion annually in federal Medicaid funds.

While describing the threatened loss of all Medicaid funds as a “gun to the head,” Roberts said the federal government could reasonably withhold new funds intended to pay for the expanded coverage.

Several parts of the health care law are intimately tied to the mandate; in particular, the so-called “guaranteed issue” and “community rating” requirements. By roping in healthy customers, the mandate helps keep premiums down and insurance companies stable in the face of new requirements that they sell insurance to anyone who asks for it. The health care law prohibits companies from charging more for or denying coverage to those with pre-existing medical conditions.

Twenty-six provisions took effect in 2010, the law’s first year, and 17 went on the books last year, according to the Kaiser Family Foundation. Nine new provisions have taken effect this year. In anticipation of a court ruling, United Healthcare, Humana and Aetna separately announced earlier this month that they’d retain some of the law’s provisions regardless of what the court decided.

The much-anticipated ruling came on the last day of the court’s 2011 term, which began last October, and it lands amid tangled political turf. Forty-four percent of U.S. residents surveyed in May expressed unfavorable views of the law and 37 percent have favorable views, the Kaiser Family Foundation found. The group’s survey also found widespread ignorance about the law and the legal challenges to it; many people told surveyors that they thought the court already had acted.

Republicans have suggested they’re sympathetic to a number of specific provisions, but they haven’t provided details on how fast they might move on any new or additional legislation. With Congress going on an extended Fourth of July recess, nothing is likely to happen immediately.

House Speaker John Boehner, R-Ohio, said in a memo last week that “there will be no spiking of the ball” after the court’s decision. While expecting a largely symbolic House of Representatives vote on repealing the entire law if the court didn’t strike it down — a measure that would die in the Senate — Republican leaders said they’d remain focused on the economy, which is more of a winning political message.

“We will not celebrate when millions of our fellow Americans remain out of work,” Boehner said.