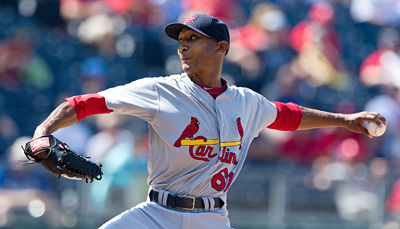 KANSAS CITY, Mo. — There were plenty of dismal numbers to dig up on Sunday afternoon, the final day of the Royals’ disappointing three-game sweep at the hands of the St. Louis Cardinals.

The Royals gave up 30 runs in three days. The Cardinals banged out 41 hits. Royals pitchers gifted another 17 walks, including nine on Sunday.

So by the time the Royals left the field Sunday after an 11-8 loss — and the Cardinals’ red army began its caravan back to St. Louis — the numbers already told a story of ugly carnage and below-average starting pitching from the three-headed monster of Vin Mazzaro, Luis Mendoza and Jonathan Sanchez.

But Sunday also continued another trend, one that illuminates a larger weekend theme: Even on Sunday, when Mike Moustakas rattled the right-field stands with two homers, the Royals’ offense just didn’t have enough bullets to make up for some shaky starting pitching and an uncharacteristic outing from reliever Tim Collins.

“It’s real disappointing anytime you drop three straight, especially to a good team like that,” said Moustakas, who had the first two-homer game of his young career. “We played good baseball today, battled back, just couldn’t get there at the end.”

There certainly was some good. Plenty bad, too.

And when the Cardinals scored five runs off Sanchez in the first two innings, you were probably able to predict how this was going to end. That’s because, well, the Royals are now 0-16 since May 16 when their opponent scores at least four runs.

By the sixth inning, Sanchez had been battered for six runs and four hits over 52/3 innings while walking six. The hits hurt … but the walks were back-breaking stuff.

“You look up there and we had more runs than hits,” Cardinals manager Mike Matheny said. “But guys were putting together good at-bats and waiting for pitches to come into their zone.”

Sanchez’s walk binge gives him 12 in 162/3 innings since returning from the disabled list on June 13. For the season, he now has 34 walks against just 28 strikeouts in 42 innings. But then again, Sanchez has always been a guy who toed the line between wild and effectively so.

“You don’t want to give the opposition an advantage,” Royals manager Ned Yost said. “And when you set in to play these games, you want the opposition to beat you. And when you’re walking guys, making errors, you’re actually beating yourself.”

The early blow came in the form of a three-run homer from former Royal Carlos Beltran, a 0-2 drive to left that came packed with eerie significant. It was eight years ago Sunday that Beltran hit his final home run as a Royal on June 24, 2004. He would be traded later that day to Houston in a three-team deal. Sunday’s blast was also his 20th of the season and he finished the series 5 for 15 with eight RBIs.

“He’s a pretty good hitter,” said Sanchez, who was teammates with Beltran in San Francisco for a brief time last season. “Just 0-2, I made a bad pitch. It was a mistake, and he took advantage of it.”

The Royals did manage to make it interesting, thanks to Moustakas’ two long balls and a two-run homer from Billy Butler in the ninth.

Moustakas’ first homer — a 442-foot bomb that nearly buzzed the fans inside Rivals Sports Bar in right field — cut the Cardinals’ lead to 3-2 in the bottom of the first. And his second — a more gentle 382-foot blast to right off St. Louis starter Lance Lynn — sliced the lead to 5-3 in the fourth.

“I just got some good pitches to hit today and didn’t miss them,” said Moustakas, whose All-Star credentials now include 12 homers and 16 doubles to go along with solid defense at third base.

Right fielder Jeff Francoeur also added a solo homer in the fourth, his first since May 27 at Baltimore — and his first at Kauffman Stadium all season. Moments later, after Brayan Pena pinballed a line-drive off Lynn into center field, Jarrod Dyson pulled the Royals all square at 5-5 with a triple to right.

In the sixth, Sanchez continued his day-long battle of ineffectiveness with St. Louis’ Lynn by surrendering a leadoff homer to catcher Yadier Molina. Yost said he simply wanted to eat a couple more outs before going to the bullpen. And Sanchez did manage two more before passing the baton to Collins.

Salvy Perez tied the game at 6-6 with an RBI single in the sixth. But Collins, who picked up the loss, coughed it up in the seventh after a walk to Matt Holliday led to a two-out RBI single from David Freese. It all came apart in the eighth, when a triple, two intentional walks and a single set the stage for a four-run inning.

“The Cardinals did a nice job this series and (Sunday’s) game,” Yost said, “(of) taking advantage of walks and finding holes.”

The Royals, 31-39, now find themselves six games back in the AL Central entering Monday and the opener of a three-game series against Tampa Bay. It’s the club’s last home series before the All-Star break. And maybe that’s a good thing.

“You know we got swept in Pittsburgh and came back and swept the Brewers at home,” Francoeur said. “And we fought today man, we came back two or three times, but eventually they got a couple big hits.”