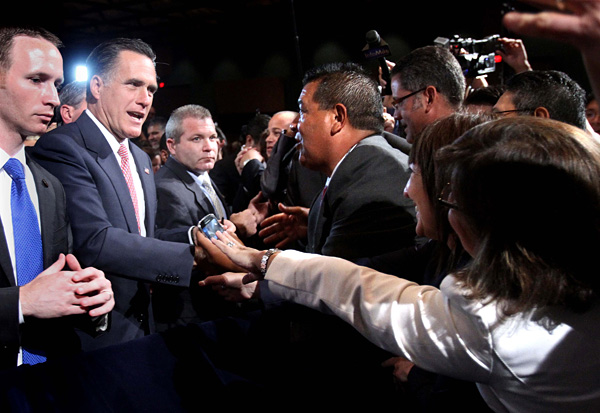 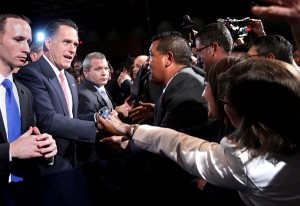 by Scott Powers and Alexandria Baca, The Orlando Sentinel –

Speaking before 1,000 members of the National Association of Latino Elected Officials at Disney’s Contemporary Resort, Romney laid out details for the first time of his alternative to President Barack Obama‘s DREAM Act immigration reform proposal, and his move last week to allow two-year work visas for some young illegal immigrants, which Romney called “a stop-gap measure.”

“As president, I won’t settle for a stop-gap measure,” he said to the crowd, who greeted him with polite applause. “I will work with Republicans and Democrats to find a long-term solution. I will prioritize measures that strengthen legal immigration and make it easier. And I will address the problem of illegal immigration in a civil but resolute manner.

“We may not always agree, but when I make a promise to you, I will keep it,” adding that Obama has let down Hispanics by not pushing harder for immigration reforms since he took office in 2009.

Romney emphasized the need to keep immigrant families together — saying he would not apply existing annual quotas to family members seeking to join immigrants who are here legally — and stressed the need to cut red tape and increase opportunities for families and individuals seeking legal visas.

He called for citizenship to be offered to any immigrants serving in the armed forces, a part of the DREAM Act, and did not refer to his previous campaign promise to veto a DREAM Act if it passed after he was elected president. He also proposed that any immigrants seeking advanced college degrees should get work visas to stay in the United States after their student visas expire.

“I will staple a visa to the diploma,” he said. That provision is included in a bill filed recently by Sen. Marco Rubio, R-Fla., a potential Romney running mate, as well as two Democratic senators.

Romney’s 17-minute speech drew occasional scattered applause as he discussed those and more general campaign issues such as the economy. He got steady though not loud applause after he finished.

He came in recognizing that he is far behind Obama in polls of Hispanics, and that NALEO has more Democrats than Republicans. But he implored them to not settle for four more years of Obama.

“I think he’s taking you for granted. I come here with a simple message: you do have an alternative,” Romney said.

Obama addresses the same group Friday at 1 p.m. And it didn’t take Gabriela Domenzain, his campaigns director of Hispanic press, to issue an acid statement:

“Today, Mitt Romney told the largest national gathering of Hispanic elected officials: ‘When I make a promise to you — I will keep it.’ But in front of an audience of Republican primary voters, he called the DREAM Act a ‘handout’ and promised to veto it. Now, after seven days of refusing to say whether or not he’d repeal the Obama administration’s immigration action that prevents young people who were brought here through no fault of their own as children from being deported, we should take him at his word that he will veto the DREAM Act as president.”

Romney did outline some specifics of his immigration plan, including “redoubling” efforts to secure the borders and crack down on people who overstay their visas, which is the most common form of illegal immigration since the Great Recession curbed the number of Mexicans crossing the border into the United States.

He also pledged to re-allocate “green card” permanent visas so they are more available to family members and cut processing red tape. Such a proposal is controversial among many anti-immigration groups, who say that an overly generous interpretation of “family member” could allow legal immigrants to bring several generations of relatives here.

Romney also pledged to create a “strong employment verification system, so that every business can know with confidence that the people it hires are legally eligible for employment.

“We can find common ground here, and we must,” Romney said. “We owe it to ourselves as Americans to ensure that our country remains a land of opportunity – both for those who were born here and for those who share our values, respect our laws, and want to come to our shores.”