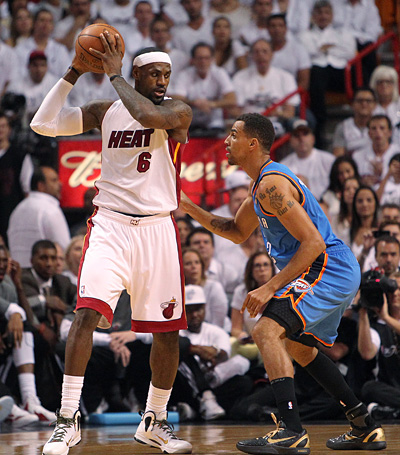 MIAMI — Sometimes, when you’re witnessing greatness, it’s not easy to place it in historical context. So how does LeBron James’ postseason stack up historically?

We asked five Hall of Famers, with some calling it arguably the best since Michael Jordan in the 1990s.

(PHOTO: LeBron James of the Miami Heat drives against Thabo Sefolosha of the Oklahoma City Thunder during the first quarter in Game 5 of the NBA Finals at the AmericanAirlines Arena in Miami, Florida, Thursday, June 21, 2012.)

“It’s probably one of the top-10 playoffs of all-time,” Magic Johnson said Thursday. “LeBron is now the most unstoppable force in the NBA, the best player in the league. Before, my biggest knock was he was playing off his God-gifted talent. He was just the best athlete. But he didn’t play with his head to match that. Now he (does). Watch out — this guy is going to set the league on fire for a long time.”

ESPN’s Chris Mullin ranks James’ postseason “up there with the all-time performances, with every great player that ever played.” Some numbers to put his postseason in perspective:

Only two players have averaged 30 points, nine rebounds and four assists in a single postseason: Oscar Robertson (1963) and James twice (2009 and this year).

James’ player efficiency rating for the entire postseason, using ESPN’s formula, is third-highest among players who reached the Finals in a particular season (minimum 500 postseason minutes), behind only Michael Jordan and Wilt Chamberlain .

“You’re talking only Oscar, Wilt and Jordan comparable as far as points, rebounds, assists,” Hubie Brown said. “And we’re not even talking defense. And to play 44 minutes a game at this level? People take that for granted.”

James on Thursday broke his own record by scoring at least 25 points in a 15th consecutive playoff games. He fell three points short of becoming the fifth player to score at least 700 points in a single postseason.

Of the leading points-producers in each of the past 43 postseasons (since 1970), James’ scoring average (30.3) would rank 14th, behind seven seasons from Jordan, two from Kareem Abdul-Jabbar and one apiece from Hakeem Olajuwon, Jerry West, Shaquille O’Neal and Allen Iverson .

If you compare the leader in points from every postseason, James’ scoring average is highest since Iverson’s 32.8 in 2001. But Iverson shot 38.9 percent; James 50.0.

This playoff run by James is better, statistically, than any long postseason authored by Kobe Bryant, who won two of his five titles without O’Neal. Their point and assist totals are comparable — comparing James in 2012 with Bryant’s best work — but James’ rebounding and shooting percentage are far superior.

ESPN’s Jack Ramsay and Heat assistant Bob McAdoo cannot think of a better playoff run — post-Jordan — than this one, though Ramsay ranks Bryant’s 2009 and ‘10 as comparable.

“This is better than Shaq,” Ramsay said. “What you see is LeBron really has lifted his game in areas he was deficient in. Taking the ball to the basket more frequently, more productively. Posting up. He made a commitment to defense this year.”

Don’t underestimate the importance of how the Heat treats its players and alums; that has helped cultivate the family environment that appealed to James and other free agents.

A couple hundred Heat employees showing up on Haslem’s lawn for a surprise birthday party.

The loyalty Riley and Arison show in retaining or even promoting longtime employees.

Riley inviting players and their families to an annual Christmas party and gala at his home. “Never saw that before,” Bosh marveled Wednesday.

Much has changed since the early years, when owners Lewis Schaffel and Billy Cunningham stopped serving food on team flights.

As one original Heater noted, “Glen Rice said, ‘Not even peanuts? It’s tradition!”

Now, Heat players get a choice of chicken or fish or beef on most flights. Everything is first-class.

Shane Battier said the Heat ranks among the league’s best in providing “whatever it takes to help us perform at our highest level — hot tubs, massage therapists. You would be surprised how far behind the curve some teams are in that. But a lot is expected of us.” Most demanding place he has played? “Easily,” Battier said.

Asked who he most wanted to win a title for (excluding himself), Udonis Haslem said, “LeBron, without a doubt. He deserves it.”

Chris Bosh, on James: “He’s made some mistakes. The part I really admire is he’s learned from his mistakes. His passion and will to win have been spectacular in these playoffs.”

James Jones, 31, who has two years and $3 million left on his contract, said Thursday he expects to play next season but hasn’t ruled out retirement. A decision also looms for Mike Miller, 32, who faces back surgery if he goes through with it.

Among the texts Battier has been getting: Duke coach Mike Krzyzewski: “Be an (expletive) in the Finals,” and Mike Dunleavy Jr.: “You’re unflappable, like the character in the movie, ‘Rookie of the Year.”‘ Cracks Battier: “Sixty and above and 13 and below is my demographic. Very underrated demographic. They love me, though.”