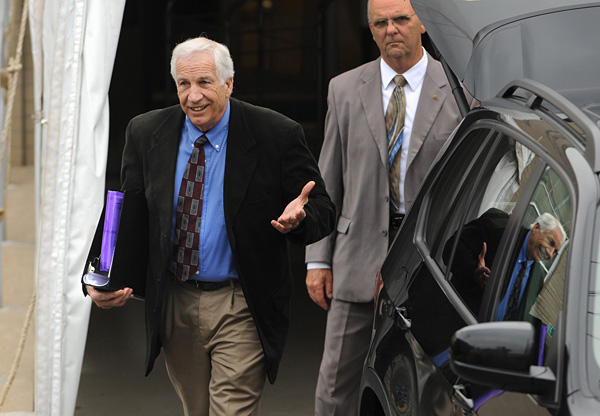 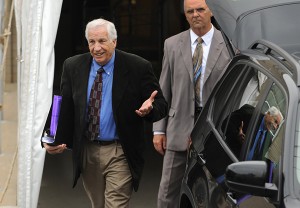 By Meeri Kim, The Philadelphia Inquirer –

BELLEFONTE, Pa. — A psychologist testifying for Jerry Sandusky’s defense is expected to present a novel defense soon on behalf of the former football coach: He has a “histrionic personality disorder,” characterized by an excessive need for attention, and that condition explains his e-mails and “grooming”-type behavior toward his alleged victims.

Sandusky is facing multiple charges involving sexual crimes against children, and as soon as Tuesday, the defense could call a psychologist, arguing that Sandusky suffers from a disorder whose symptoms include exaggerated expressions of emotion.

(PHOTO: Jerry Sandusky exits the courthouse after his trial ends for the day, Monday, June 18, 2012, during the second week of the Jerry Sandusky sexual abuse trial, at the Centre County Courthouse, in Bellefonte, Pennsylvania.)

Any testimony would likely be followed by a prosecution expert who examined Sandusky on Sunday.

Some independent experts consulted by The Philadelphia Inquirer were not impressed with the diagnosis.

“If this was something where he needed attention, why not an age-appropriate affair or prostitutes? But he didn’t do that,” says Thomas F. Haworth, a psychologist at the Joseph J. Peters Institute in Philadelphia, a nonprofit providing treatment for sexual abuse victims and offenders.

William R. Dubin, professor of psychiatry at Temple University School of Medicine, also was skeptical: “He’s grasping at straws. … I can’t imagine this kind of personality being a successful football coach. A certain discipline, a certain attention to detail, a certain persistence is required, and these are qualities that don’t exist in a histrionic person.”

Those with histrionic personality disorder exhibit a pattern of being overemotional, attention-seeking, and sexually seductive. Everything is overexaggerated; for instance, “white is whiter than you’ve ever seen, red is redder than you’ve ever seen,” Dubin said. Symptoms generally emerge by early adulthood, and prevalence within the general population is about 2 percent to 3 percent, as estimated by the official manual of disorders published by the American Psychiatric Association.

Dubin also notes that many more women are diagnosed than men, but perhaps only because traits such as sexual forwardness are less socially acceptable for women. Because of this, histrionic personality disorder is seen by some as “a chauvinistic diagnosis,” Dubin said.

Defense lawyers are using the psychologist’s testimony to rebut the accusation that “words, tones, requests, and statements” made by Sandusky were meant to manipulate victims into having sexual relations with him. The expert is expected to say that love letters and other actions are “just as likely or more likely histrionic in origin” and “would not necessarily be to groom or sexually consummate a relationship in a criminal manner.”

Throughout his career, Haworth has witnessed numerous defense testimonials from sexual offenders and their lawyers, and often heard tales of depression, stress, intoxication, and bipolar affective disorder, but never histrionic personality. “I was taken aback,” he stated. “I’ve never seen histrionic personality disorder associated with, or as a predictor of, sexual misconduct.”

With the recent controversy in sports of repeated concussions being linked to dementia, Haworth is surprised that Sandusky’s lawyers chose not to approach from that angle. Sandusky played defensive end at Pennsylvania State University from 1963 to 1965.

The former coach’s behavior would “remain criminal,” but brain damage could serve as a partial explanatory model. “I have seen older men that have no history of pedophilia have some event in their brain like a tumor … and start to develop sexual behavior problems,” Haworth said.