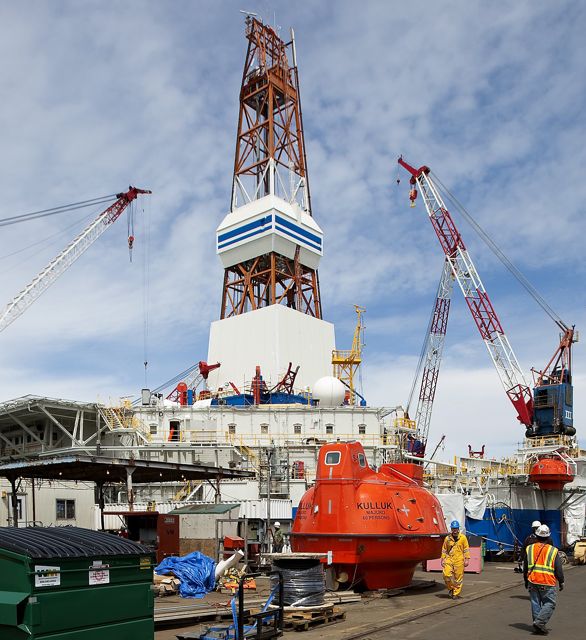 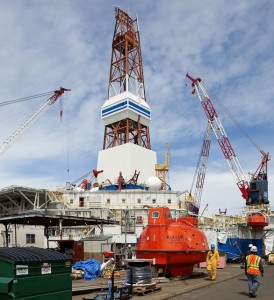 By Hal Bernton, The Seattle Times –

SEATTLE — During the last year, some 400 workers at a shipyard on Seattle’s Harbor Island have been installing new diesel engines, welding bulkheads, painting and tackling other tasks to prepare the Kulluk, a Shell Oil rig, for drilling holes this summer in the sea bottom off Alaska’s North Slope.

The refurbishing of Kulluk and other Shell work done in the Pacific Northwest has pumped some $200 million into the local economy, according to company officials. This could be the launch to what may be a decade of exploration and development of offshore oil fields in Arctic waters.

(PHOTO: The Kulluk is nearly ready for Arctic oil exploration off Alaska’s north coast. The orange life rafts carried on the rig are sealed to protect against fire and oil. Each unit carries up to 60 people and can motor away from the rig to safety.)

“It’s the first new maritime-associated industry to start to emerge in Puget Sound in decades, and we’re just thrilled about it,” said John Lockwood, a senior adviser at Vigor Shipyards, which landed the oil-rig work at Harbor Island.

The push into the Arctic comes amid a major resurgence of a U.S. oil industry that once appeared stuck in long-term decline. Within the past five years, new technologies exploiting oil fields in North Dakota, Texas and other states have contributed to a 15 percent rise in U.S. production since 2008.

Producing oil in the offshore Arctic could provide another significant boost.

Federal estimates of the potential oil reserves in the Beaufort and Chukchi seas off Alaska’s North Slope indicate there could be 25 billion barrels, an amount greater than the crude produced at the giant Prudhoe Bay onshore field during the past 30 years.

But Shell’s initiative is stirring up an old fight over oil drilling in the Arctic.

Environmental organizations have repeatedly opposed Shell in court. Greenpeace has conducted a series of protests, and this summer is sending one of its protest ships, Esperanza, to monitor drilling.

Shell’s plans also have caused concern among the Inupiat Eskimos of Alaska’s North Slope, who have benefited enormously from onshore oil development yet turn to the sea to hunt bowhead whales and other marine mammals.

Some residents have backed offshore exploration as a way to create jobs and a tax base to sustain the North Slope economy. Others have opposed Shell.

“We are opposed to offshore development because the ocean is like our garden up here in the Arctic for our subsistence way of life,” said Tommy Olemaun, executive director of the Native village of Barrow, Alaska, a tribal organization that is separate from the Barrow municipal government.

“The bowhead whale is the major food that we live off, and then there is the walrus, bearded seal and beluga.”

Shell first drilled in Arctic waters back in the 1980s, before abandoning the test holes during a period of low oil prices.

If the company embarks on a new round of development, Shell officials say production from the fields wouldn’t begin until 2023 at the earliest.

Shell’s preparations could include a 400-mile pipeline that would be needed to carry Chukchi Sea oil across the North Slope to the trans-Alaska pipeline.

“We are not touting any kind of grand energy independence. This is all about energy choice,” said Pete Slaiby, a Shell Alaska vice president. He said offshore Arctic oil could help replace crude from regimes that the United States does not want to support.

The Kulluk and a second rig, the Noble Discoverer, are scheduled to depart Seattle later this month for the slow journey north. The rigs would begin drilling sometime in July, when unusually heavy pack ice recedes enough to allow for summer work to begin.

Slaiby earlier this month gave a tour of the Kulluk to two enthusiastic boosters — Alaska’s Gov. Sean Parnell and Sen. Lisa Murkowski, both Republicans — who are eager for new sources of oil to help keep the trans-Alaska pipeline from eventually being shut down because of a major decline in production from the onshore fields.

“We have a lot of potential on state lands. But in terms of what is happening right now, with actual dollars being invested in new exploration plays, this is it,” Parnell said.

Offshore exploration in remote Arctic waters has long been a contentious proposition.

The 2010 BP blowout and oil spill in the Gulf of the Mexico undermined confidence in the oil industry’s ability to handle a major drilling disaster.

There also are increasing concerns in the scientific community about the impacts of global warming — particularly in the Arctic — as fossil fuel combustion and other human activities contribute to a buildup of greenhouse gases.

“This is the point where we should invest in clean energy, and aggressively pursue solutions to our dependency on oil,” said James Turner, a spokesman for Greenpeace International, which advocates closing the offshore Arctic to oil development.

During protests earlier this year, Greenpeace boarded vessels in New Zealand and Europe scheduled to take part in the exploration effort this summer off Alaska.

The Esperanza, the Greenpeace vessel that will monitor the Shell exploration, will also carry submarines to explore the sea bottom. Greenpeace has been ordered by an Alaska judge to stay at least a kilometer away from the Shell drilling rigs.

Environmentalists point to the unsuccessful attempts to contain the 2010 spill in the Gulf of Mexico, and say that a cleanup would be a far more difficult effort in the harsh Arctic environment.

During the tour, Shell officials said drilling in the offshore Arctic leases will be at much shallower water depths than in the Gulf. Shell said Arctic drilling will be done at about 150 feet deep, compared to 5,000 feet deep, where BP’s well blew out in the Gulf.

The wells also will tap into reservoirs that are under less pressure, reducing the risk of a major blow out, the company said.

Shell outfitted the Kulluk’s blowout preventer with a second set of shear rams that could shut down the well should the first fail to do the job. Shell also engineered a backup cap-and-containment system similar to the one that stopped the BP blowout.

Should those systems fail, Shell will have oil-spill response vessels and other equipment stationed in the Arctic that they say could begin a cleanup.

To support the drilling effort, Shell will send nearly 20 vessels this summer to the Arctic in addition to the Kulluk and the Noble Discoverer.

The circular Kulluk, with a derrick that towers some 230 feet above the ocean’s surface, was built in the early 1980s. It drilled wells in the Canadian Beaufort Sea before being stored for years in shoreside ice. The refurbished Kulluk has new diesel engines and will house 108 crew members. The crew will work 12-hour shifts for three weeks running through the drilling season.

Shell’s work on the Kulluk and other preparations in the Pacific Northwest have created hundreds of shipyard jobs. Annual wages for such jobs at Vigor typically range from about $40,000 to $100,000 a year.

If Shell moves forward with development, the company would also have a need for production rigs and other equipment that Vigor might bid for, Lockwood said.

The Puget Sound region would also receive a boost as a transportation hub for pipeline and other supplies that would be shipped north to support the offshore oil fields. Other oil companies are expected to join Shell in drilling offshore wells.

Slaiby, however, says that a new maritime support industry for the offshore Arctic would not look anything like the sprawling facilities built in an earlier era to help sustain Gulf of Mexico drilling.

“There will be a smaller number of operators, and a smaller footprint,” Slaiby said.