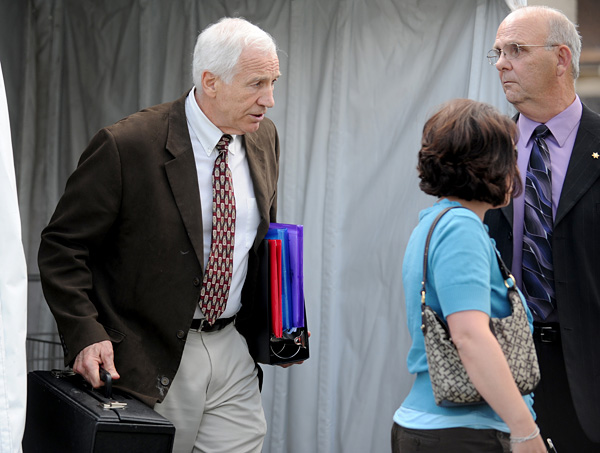 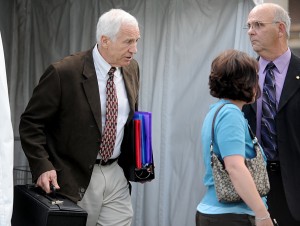 By Jeremy Roebuck and Michael Matza, The Philadelphia Inquirer –

BELLEFONTE, Pa. — Prosecutors closed their case Thursday in the Jerry Sandusky child-sex-abuse trial with testimony from a man who said his cries for help went unanswered as he was repeatedly sodomized in the former coach’s basement.

When asked why, with Sandusky’s wife sleeping upstairs, no one responded to his screams, the 18-year-old, looked down, chewed on his fingers, and softly answered.

(PHOTO: Jerry Sandusky exits the Centre County Courthouse after the fourth day of his trial on Thursday, June 14, 2012, in Bellefonte, Pennsylvania. )

“No one can hear you down there,” he said.

His account of three years of abuse at the hand of the former Pennsylvania State University assistant football coach punctuated four days of graphic and consistent stories of molestation from eight young accusers.

Many told tales of rape in the basement of Sandusky’s State College home.

And nearly all recalled one consistent quirk: While driving in the car with boys, “he had a thing for grabbing your knee and then moving his hand up. That was a big thing with Jerry,” a 25-year-old Army national guardsman identified in court filings as Victim 3 told jurors Thursday.

Despite their discomfort, they kept coming back, many said, because Sandusky offered them access to the Penn State football program, its players, and its perks. Jurors also heard about two additional alleged victims who remain unidentified by investigators but whose purported abuse was witnessed by others.

Summarizing the case from the stand Thursday, lead investigator Anthony Sassano addressed why many of the prosecution’s witnesses seemed hesitant to come forward.

“I wouldn’t want to sit here and discuss with you my sexual experiences, either,” he said.

Starting Monday, Sandusky’s lawyers will have their first chance to put on evidence in response to those claims. Although lawyer Joseph Amendola has made no firm commitment that his client will take the stand, he suggested in his opening statement to jurors Monday that they would hear from Sandusky during the trial.

The former coach has denied charges that he molested the 10 boys over 15 years. Prosecutors allege he met all of his accusers through the Second Mile, a charity for underprivileged youth he founded in 1977.

And for at least two of the alleged victims who testified Thursday, the mentoring role Sandusky played in their lives allowed them to look past their purported abuse for years.

Young men identified as Victims 3 and 6 continued to stay in contact with Sandusky and his family up until recently, they said.

Under cross-examination, Amendola pressed both on what changed their opinion of the man served as a father figure in each of their lives.

“He made me feel like I was part of something like a family,” Victim 3 replied. “He gave me things that I never had before. I didn’t want to give it up. I loved him.”

Their relationship advanced quickly, when as a 12-year-old he met Sandusky at a Second Mile casino night in 1999. Life at home with his mother was rocky, he had never known his father, and Sandusky gave his time generously, he said.

Soon, he was staying over at the coach’s house nearly every weekend. But each night, Victim 3 told jurors, Sandusky would come down to the basement, tickle him, rub his stomach and pelvis, and often paw at his genitals.

Victim 6 testified he was horrified when his mother called police after his alleged abuse in 1998.

“It wasn’t a big deal to me,” he said. “I thought she was making a big deal out of it. I felt like (by talking to police) I was doing something wrong.”

Now a 25-year-old and a recent graduate from a Colorado Bible college, the young man described Sandusky taking him on a tour of the Penn State football facilities that year, exercising with him, and then insisting the two shower together.

Naked under the nozzles, the coach called himself the “tickle monster” and snuck up behind the boy wrapping him in a tight bear hug, Victim 6 said.

“I remember feeling his chest hair next to my face,” he said. “I remember thinking, ‘This is icky.’”

While Sandusky held and pressed up against the boy while naked, Victim 6 said, he does not recall the coach touching his genitals.

Penn State police investigator Ronald Schreffler handled the case after the boy’s mother made her report. He said that when confronted, Sandusky replied, “I understand I was wrong. . . . I wish I were dead.”

And while Schreffler said he ultimately felt the coach should have been charged, the case went unprosecuted — a decision Victim 6 said he agreed with at the time.

For years, the teen stayed in touch with Sandusky and his family, asking them to help fund a 2010 mission trip to Mexico City and stopping by their home on trips back to State College. As recently as 2009, the young man sent his former mentor a text wishing him a happy Father’s Day.

Asked when he finally changed his mind about Sandusky, he replied: “I hadn’t thought about that shower incident in years. I put it out of my mind. My perception changed as an adult.”