On eve of Egypt runoff election, revolution feels all but dead 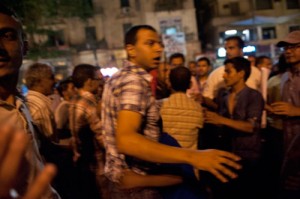 CAIRO — In the hours before Egyptians head to the polls in a runoff presidential election, the revolutionaries whose movement prompted the vote were in disarray. With no candidate, and following a judicial ruling that dissolved the parliament elected last fall, some revolutionaries conceded Friday their failure to win real reforms has exposed a lack of organization and strategy.

With two days of voting beginning Saturday, they acknowledged that their only plan now is to stop Ahmed Shafiq, a holdover from the regime of deposed President Hosni Mubarak, from winning the election and taking back the state through the ballot box. Although Shafiq appears to be the front-runner, rebels spent Friday grudgingly urging allies to vote for his rival, Muslim Brotherhood member Mohammed Morsi, hours after some had called on him to withdraw.

“The revolution was hijacked by a military that wanted to carry out a coup. And the Brotherhood is killing the revolution,” said Mohammed Hasan, 21, an education student and member of the April 6 revolutionary group, as he marched to Cairo’s Tahrir Square. “But I have no choice. I must vote for Morsi or die.”

Egypt on Friday in many ways resembled the state before Mubarak stepped down 16 months ago in what was originally called a revolution. Mubarak’s vast, opaque system of government remained intact, still guided by the ruling council of military generals and backed by a Mubarak-created judiciary. The revolutionaries who called for major change were a fractured group, too weak to go head-to-head against that system. Egypt’s most organized political force, the Brotherhood, reached for power even as other anti-regime elements feared what kind of Egypt they might create.

At least two parliament members who ran under the banner of revolution announced that they’d support Shafiq, Mubarak’s former prime minister, in what seemed to be a political calculation.

“I was the happiest person when the ruling” dissolved parliament, said one of the lawmakers, Mohammed Abu Hamed. “I saw the way the Brotherhood worked in parliament. The way they pushed their views and opinions was frightening. Shafiq is the most capable of fulfilling the demands of the revolution.”

Egypt’s Supreme Constitutional Court ruled Thursday that one-third of the parliament had been elected illegally during last fall’s elections. State-backed judges said afterward that the entire legislative body — composed largely of Muslim Brotherhood members — must be dissolved, leaving the ruling military council as the only political entity that could draft laws and potentially craft a new constitution.

A day earlier, the military council announced that troops could arrest civilians for a broad range of reasons in what appeared to be the return of marital law, just weeks after a three-decade emergency law had expired. Military vehicles surrounded Parliament Friday, preventing former members from entering without permission, and armored vehicles appeared throughout the city, signaling a military overtly in charge of the state.

In a desperate attempt to recreate the momentum that led to the fall of Mubarak’s regime, a few thousand marched to Tahrir Square Friday to protest the ruling, some at times setting posters of Shafiq on fire. But with Morsi on the ballot, the Brotherhood, whose participation galvanized the anti-Mubarak protests last year, did not call their members to the streets and the revolutionaries could not create large turnout on their own. The crowds were small enough that marchers recognized friends en route to the square.

Even those marching, however, couldn’t agree on whether to vote for Morsi or boycott altogether. Some wore stickers calling for a boycott, drawing the ire of those marching next to them.

“There is no strategy because we have no strategists,” said a frustrated Ahmed Naquib, spokesman for the a group called the Trustees Council for the Revolution. “This is how we ended up here.”