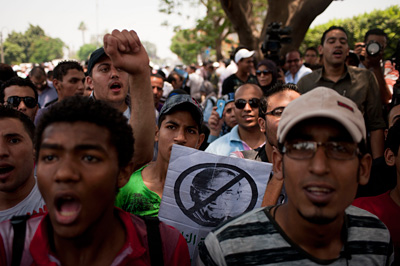 CAIRO — With a pair of court rulings, forces aligned with fallen former Egyptian President Hosni Mubarak succeeded Thursday in reversing many of what had been considered democratic gains that have taken place here in the 16 months since Mubarak was toppled from power. Critics denounced the developments as the equivalent of a coup.

The reversals came in the form of two rulings handed down by the Supreme Constitutional Court, all of whose members were appointed by Mubarak. The first ruling essentially dissolved Parliament, whose members had been elected last year in what was widely considered the first free and democratic election in Egypt’s history.

(PHOTO: Demonstrators gather outside Egypt’s Supreme Constitutional Court in Cairo on Thursday, June 14, 2012. In a highly anticipated ruling that put the legitimacy of Egypt’s legislature and future constitution in question.)

In the second, the court endorsed the eligibility for the presidency of Ahmed Shafik, Mubarak’s last prime minister, whom Parliament had sought to ban from office as a holdover from the old regime.

Combined with the granting to the military this week of broad powers to arrest civilians, the decisions seemed to complete efforts by the Supreme Council of the Armed Forces, which has officially ruled Egypt since Mubarak’s ouster, to regain control of the state. With the dissolution of Parliament, many think the military council might become the nation’s legislative body and also assume the responsibility for writing a new constitution.

“Egypt just witnessed the smoothest military coup. We’d be outraged if we weren’t so exhausted,” tweeted Hossam Bahgat, the director of the Egyptian Initiative for Personal Rights.

“A complete coup,” former presidential candidate Abdel Moneim Aboul Fotouh, a moderate Islamist who placed fourth in the 13-man first round of balloting, wrote in a Facebook posting.

“What has happened is that the revolution has lost to the state,” said Zaid Akl, a political analyst at Al Ahram Center for Political and Strategic Studies. “The state successfully absorbed the shock of the revolution.”

In Washington, State Department spokeswoman Victoria Nuland said the Obama administration was still trying to determine the full impact of the developments, but she expressed concern that the rulings would lead to further instability and, ultimately, the rolling back of democratic gains.

“We want to see the Egyptian people have what they fought for, which is a free, fair, democratic, transparent system of governance that represents the will of the people: a parliament so elected, a president so elected,” Nuland said. “Those are the standards that they want. Those are the standards that the international community wants. So we are trying to get a better handle with the Egyptians on how that is going to move forward, based on this court decision.”

The country’s military had prepared Wednesday for a controversial ruling from the court, sending tanks and armored personnel carriers to guard its offices and announcing the new arrest powers just two weeks after it had allowed Egypt’s emergency law to expire. But the breadth of the court’s findings caught many people by surprise.

Judge Farouk Sultan, the head of the court, who also heads the Presidential Elections Commission, said on state TV that the first ruling “means the full dissolution of the Parliament.”

The issue in the ruling was whether Parliament had been illegally constituted because too many members who’d been elected as independents were actually members of the Muslim Brotherhood, an Islamist group that was banned under Mubarak’s rule but that’s emerged as the country’s most powerful political group. Egypt’s interim constitution required that one-third of the members of Parliament be independents, while two-thirds were to be elected according to party slates.

The second ruling declared unconstitutional legislation that the Islamist-dominated Parliament had passed, known as the political isolation law, that banned members of Mubarak’s government from running for the presidency. The law was introduced after Shafik, a retired air force general who was Mubarak’s last prime minister, had registered to run for president. The court said it was an impermissible limitation on a specific individual who’d broken no other laws.

It was uncertain how the rulings would affect voting in this weekend’s runoff for the presidency, which pits Shafik against the Muslim Brotherhood’s Mohammed Morsi. The matchup — balloting will take place Saturday and Sunday — has dismayed the secular revolutionaries whose demonstrations led to Mubarak’s resignation since it was decided in voting last month.

The revolutionaries are loath to vote for Shafik as a holdover of the old regime, but they fear that a Morsi victory would concentrate too much power in the Muslim Brotherhood’s hands. The losing candidates who generally drew the revolutionary vote in the first round declined to endorse either candidate.

Hamdeen Sabahi, an Arab nationalist and revolutionary favorite who came in third in the first round and won in Cairo and in Alexandria, Egypt’s second largest city, angered his supporters Thursday by calling for Egyptians to “respect the judiciary.”

Others said the rulings should be viewed with suspicion.

“The rulings undermine the credibility of this weekend’s balloting, further jeopardize the reputation of Egypt’s traditionally respected judiciary and raise the specter of a new round of mass demonstrations,” the Washington Institute for Near East Policy concluded.