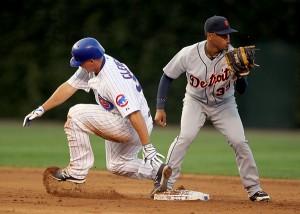 But when the process gets under way, manager Dale Sveum is likely facing a long and difficult rebuilding task.

Sveum knew coming into the job that the team he left spring training with wouldn’t be the same one he ended the year with, so he’s ready for anything that comes his way.

(PHOTO: Chicago Cubs’ Steve Clevenger reaches second base on a double as Detroit Tigers’ Ramon Santiago catches the late throw in the 2nd inning at Wrigley Field in Chicago, Illinois, on Wednesday, June 13, 2012.)

Before Wednesday’s 8-4 loss to the Tigers at Wrigley Field, Sveum said it’s just “part of the game” and something he has to deal with.

“You’ve seen it with the Astros the last couple of years, losing (Hunter) Pence and (Michael) Bourn and guys like that,” Sveum said. “A team gets dismantled and you do the best you can. There’s nothing else you can do about it.”

Matt Garza, the losing pitcher Wednesday night, is one of the more coveted players on the Cubs roster and could be a goner. He had to endure trade talk all last winter and seems immune from questions about it.

“I just want to keep playing,” he said. “It doesn’t matter where. I’ll pitch on the freaking moon. As long as people keep asking me, you’ve done a good job. When they stop asking, it’s time to worry.”

“If they want to keep me here, I’m going to go out every five days,” he said. “I love the city. My kids love the city. It’d be a great place for them to grow up. But it’s out of my control.”

Garza and Ryan Dempster are the top two chips the Cubs have, and President Theo Epstein has to listen to offers for both, whether he decides to move Garza or not.

Garza blew a three-run lead in the Tigers’ four-run sixth, which was ignited when Joe Mather made an error on a potential double play grounder. Mather was playing third base for Ian Stewart, whom Sveum said will go on the disabled list Thursday with a sore left wrist with Luis Valbuena as a possible call-up.

Dempster has been the subject of trade talks since he conceded recently he would be open to waiving his trade veto rights. The Cubs are moving forward in the process of finding the right team, and will send Dempster to a destination he would prefer, assuming they get the right pieces in return.

Dempster had a chat with Epstein on Wednesday in the grandstands behind third base.

The Dodgers and Tigers are looking for starting pitching and reportedly are interested in Dempster. Several other teams are likely to be in the mix and it wouldn’t be a surprise if the Yankees are interested as former general manager Jim Hendry is an assistant to GM Brian Cashman and former pitching coach Larry Rothschild is there too.

Aside from making deals, the Cubs also are discussing the right time to call up their top prospect, Triple-A Iowa first baseman Anthony Rizzo, who sat out Wednesday’s game with a bruised right knee. Rizzo was OK. Sveum knows Cubs fans are dying to see whether he’s the real deal.

“He’s that guy, and the name is there and it’s getting built up to that point where it’s getting near now,” Sveum said.