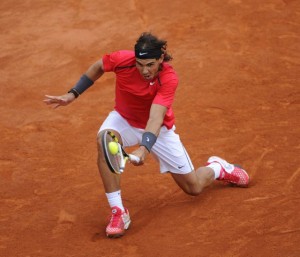 PARIS — Only one man could answer history’s summons to the court at Roland Garros on Monday, and his name had been engraved on the winner’s trophy six times already.

For the seventh, a feat no male player before him had achieved, Rafael Nadal roared back from a break of serve down in the fourth set to win a rain-delayed French Open men’s final Monday, powering past Novak Djokovic, 6-4, 6-3, 2-6, 7-5. Fittingly, the sun finally broke through the clouds as the Spaniard closed in on victory, which came when Djokovic double-faulted on match point after the two had been back on court for less than an hour.

Nadal, the defending champion, demonstrated that, though ranked behind his Serbian opponent at No. 2, he remains the world’s best tennis player on clay, at present and arguably of all time. The win lifted him above the record of six French titles he shared with Swedish legend Bjorn Borg and thwarted Djokovic’s attempt to make history by becoming the first man in 43 years to win four Grand Slam tournaments in a row.

Nadal, 26, now boasts a staggering 52-1 record on the rust-colored terre battue of Roland Garros. The only year in eight successive appearances that he failed to take home the glittering Coupe des Mousquetaires was 2009.

Monday’s triumph increased Nadal’s overall Grand Slam title count to 11, the most of any active male player after Swiss great Roger Federer, who has 16.

“I feel very lucky to achieve all what I have achieved,” Nadal said afterward. “For me (it) is a really emotional day.”

The two-day match, played over Sunday and Monday, was the fourth consecutive Grand Slam final featuring the same two men, itself a record.

But where Djokovic triumphed in the previous three — including a grueling win at the Australian Open in January, the longest major men’s final ever — Nadal’s experience and supremacy on Parisian clay was not to be gainsaid. The slower surface allows him to retrieve nearly every ball, sliding into perfect position to send it back with possibly the most vicious topspin the game has seen.

The match was essentially a battle for territory, a duel to see who could claim the most ground. Both men struck deep, penetrating shots, but whichever player was able to press forward and choke off angles, pushing the other man farther and farther behind the baseline, almost inevitably won the point.

The turbocharged slugfest meant that forays to the net were infrequent and often futile. Djokovic successfully lobbed over a charging Nadal, while Nadal burned a rushing Djokovic with blistering passing shots.

Attesting to the consistency that is the bedrock of his game, Nadal committed far fewer errors than Djokovic, 29 to 53.

That showed in the ease with which the Spanish southpaw pocketed the first two sets Sunday. Unable to find a rhythm, much less dictate it, the right-handed Serb flung his racket onto the dirt in disgust — it bounced like a ball — and later thwacked it against his bench, sending shards of an advertising placard flying.

He eventually found his range. “I started serving better and I was in the court and, you know, I was playing really aggressive,” said Djokovic, who came from 0-2 down to take the third set by storm.

But then a small storm Sunday helped take the fourth set from him. As Djokovic led 2-1, up a break of serve, tournament officials decided to suspend the match temporarily because of steady drizzle, then canceled play for the rest of the evening, pushing the men’s final past Sunday for the first time since 1973.

Djokovic, 25, called the decision “unfortunate” but declined to criticize tournament officials, though the rain soon tailed off and daylight remained. Nadal acknowledged that the halt in play helped him.

“The conditions were much more favorable for Novak than for me. At the same time, I am playing against the best of the world,” he said. “I felt that was a positive stop for me.”

He confessed to feeling nagged by nerves overnight, which he tried to assuage by reading “a few chapters of my favorite comic book.”

On Monday, before a mostly full stadium, Nadal immediately broke Djokovic to level the set at 2-2, helped by a shot that hit the net cord, drawing the Serb to the net, where he was a sitting duck.

The world No. 1 played a strong service game at 4-5 to stay alive. But under heavy pressure at 5-6, and in spite of a spirited crowd cheering him on, he couldn’t prevent Nadal from setting up match point with a relentless attack and sizzling winner into the corner.

After Djokovic’s untimely double fault, Nadal knelt as if in prayer. Then he got back up, shook his opponent’s hand and climbed into the stands to embrace his friends and family.

“You don’t know if you will ever win another victory. You don’t know if this year is going to be the last one,” the Spaniard said. “I achieved it this year, but as time goes by, you give more value to those very precious moments.”