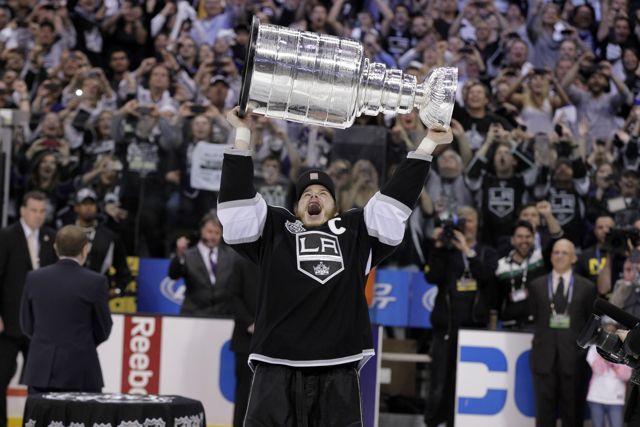 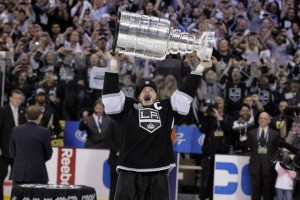 LOS ANGELES — They were the five minutes that changed 45 years.

Five minutes responsible for finally releasing and unleashing 4 ½ decades of franchise frustration. The five minutes that helped lift the Kings to their first Stanley Cup as they defeated the New Jersey Devils, 6-1, on Monday night in Game 6, winning the best-of-seven series, four games to two.

And so, it will be Steve Bernier becoming part of Kings’ lore and Stanley Cup history. Not Jonathan Bernier, the Kings’ backup goalie, but Steve Bernier, a fourth-line forward for the Devils. Bernier took a five-minute boarding major, knocking Kings defenseman Rob Scuderi into the boards, face first, in the first period.

Turning point would be an understatement. On the ensuing five-minute major, the Kings scored three times. This was the same team that scored six power-play goals in the first three rounds of the playoffs.

Fittingly, captain Dustin Brown opened the scoring with a deft redirection and he bookended the celebration by taking the Stanley Cup from NHL Commissioner Gary Bettman and lifting to the joy of the Staples Center crowd.

“Heavier than I thought,” said Brown, who also had two assists. “Knocking knees. There’s no words to describe, lifting that thing.”

This was a career-defining moment for the longest-serving King, the baby-faced father of three boys. On the day before the Final, Brown had spoken about dreaming of hoisting the Cup as a 4-year-old.

“It’s one of those things you dream all your life for as a player,” Brown said. “The city of Los Angeles has been dreaming of this for 45 years. There were about 20 million dreams coming true tonight.”

Step up, Willie Mitchell. Brown handed the Cup first to the veteran defenseman, the 35-year-old thirsting for his first Cup. Mitchell’s career had been in doubt as recently as two years ago when he was struggling from post-concussion symptoms.

He took the Cup from Brown and then it turned into a blur. Mitchell then handed the Cup to Simon Gagne, who missed about five months because of a concussion and returned in Game 3 of the Stanley Cup Final.

“I don’t know, I was in shock,” Mitchell said. “I was thinking about my family, my wife and my friends — and how they supported me on this journey. To be honest, I was looking up for them and showing it off because I knew where they were sitting, and then I forgot to kiss the thing.

“So get that thing back here somehow because everyone else is kissing it and I forgot.”

Mitchell summoned his childhood memories of hockey and fashioning a mock Stanley Cup.

“You get a little green garbage can and pose with it,” he said. “We just did it for real, baby. It was so awesome, so cool. … We faced a lot of adversity this year. We had one of our coaches fired. We found a way to dig ourselves out of a hole, after that, and get to this point. It’s pretty unique.”

The coaching change was a turning point in the season. Darryl Sutter replaced Terry Murray in mid-December and Sutter, a career hockey man from a legendary hockey family, became the third Sutter to win a Cup.

“Dog (Duane) and Brent got their name on it six times,” Sutter said of his brothers, who played for the New York Islanders. “I wish each one of my brothers could have been on there. Take a run at it again. That’s the next thing.”

For Sutter to speak about next season was vintage Sutter. So was his description of winning the Cup, saying: “It was pretty awesome.”

Sitting next to Sutter on the podium was Kings goalie Jonathan Quick and the Conn Smythe Trophy. As widely expected, Quick won the award given to the playoff most valuable player. Quick was steady and spectacular, going 16-4, with a save percentage of .946.

Brown, Jeff Carter and Trevor Lewis had made it 3-0 with the power-play goals and Carter’s second goal and seventh of the playoffs pushed it to 4-0 at 1:30 into the second period. Quick admitted that thoughts of the Cup crept in at that point.

“These guys can stay in the moment,” Sutter said. “They could get there and stay there, be resilient. They’ve pretty much heard it all, right?

“Now they can just soak it all in.”