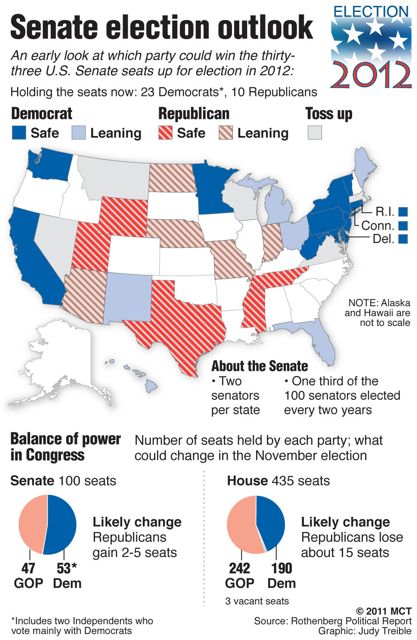 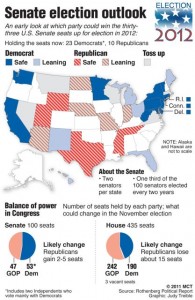 WASHINGTON — Five months before Election Day, Republicans are poised to retain control of the House of Representatives and inch close — and perhaps win the majority — in the Senate.

The outlook is driven by local factors rather any kind of wave for or against either major political party. Indeed, the lack of a national tide could help the Republicans hold the House, where they’re expected to lose seats but not enough to cost them the majority.

Top analysts who chart congressional campaigns now see Republicans losing as many as 15 seats in the House of Representatives, a loss that still would leave them comfortably in control. Democrats need a net gain of 25 to regain control.

In the Senate, consensus forecasts say Republicans should add two to five seats. The Republicans need to gain four seats to take a 51-49 majority and seize nominal control away from the Democrats. Rothenberg forecasts Republicans gaining two to four seats; Cook sees a gain of two to five. They still would be well short of the 60 votes needed to pass anything controversial.

A key factor: While most Americans hate Congress, they’re not ready to give either party a huge mandate, or toss out incumbents in big numbers.

There are no signs of a wave election when voters seem to speak with one angry voice such as 2010, when they rose in backlash against President Barack Obama and Democratic control or, to a lesser degree, as they did in 2006 against President George W. Bush and Republican control.

“By and large, I don’t think the electorate is ready to engage in a wholesale firing of members of Congress, even if they distrust the legislators in general — and may harbor suspicions about their own representative,” said Burdett Loomis, a congressional expert at the University of Kansas.

Of course, things could change. The fragile economy could stumble. An international crisis could erupt. Independent voters, who are primed to be unusually decisive this year in close races, usually don’t make up their minds until late fall.

“We’re not going to know whether there is a wave until just before it breaks,” probably in the fall, said Rep. Steve Israel, D-N.Y., chairman of the Democratic Congressional Campaign Committee. Israel is cautious, predicting Democrats will gain “in the range” of the seats needed for House control.

Republicans are equally circumspect. “We are cautiously optimistic about our chances of taking the Senate in November,” said Brian Walsh, National Republican Senatorial Committee spokesman.

Among the most closely watched states with House toss-ups is New York. Its huge base of moderate Republicans has been leaving the party, and redistricting has added to the uncertainty.

“People had been willing to split tickets, but recently they’ve been more or less voting for one party or the other,” said Michael Malbin, professor of political science at State University of New York at Albany.

Senate races, because they involve broader constituencies, are more subject to national trends. Some of the biggest battles are due in swing states likely to see intense presidential campaigning.

Ohio, for instance, could be decided by voters’ attitudes toward the fragile economy. Will they stay the course with incumbent Democratic Sen. Sherrod Brown, or try a new path with Republican Treasurer Josh Mandel?

Nevada’s economy has been reeling, with unemployment that has been among the nation’s worst. The state will be a major presidential battleground, and the races of Republican Sen. Dean Heller and Democratic Rep. Joe Heck are two to watch.

But so far, there’s little evidence of voter outrage toward incumbents. “We’ve just been battered for so long, and we’re seeing things come back a bit,” said David Damore, associate professor of political science at the University of Nevada Las Vegas.

At least four other Senate races are seen as close:

—Wisconsin. Former Republican Gov. Tommy Thompson, a center-right candidate, has a history of winning statewide and could take the seat of retiring Sen. Herb Kohl, D-Wis. Thompson first has to win an Aug. 14 primary.

—Massachusetts. The race between Sen. Scott Brown, R-Mass., and consumer advocate Elizabeth Warren is likely to stay too close to call. Warren has stumbled over her claims to Native American heritage.

—Virginia. A battle of two former governors, Democrat Tim Kaine and Republican George Allen, vying for the seat being vacated by Sen. Jim Webb, D-Va. Webb beat Allen six years ago by only 9,300 votes out of more than 3.3 million cast.

—Montana. Sen. Jon Tester, a Democrat, won a tight race in 2006 against a weakened incumbent. This time he faces Republican Rep. Denny Rehberg, who has won six statewide races for Montana’s only House seat.