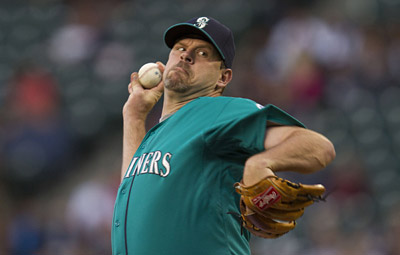 By Bob Condotta, The Seattle Times –

SEATTLE — The third no-hitter thrown by the Seattle Mariners in their 35-year history was far from conventional.

But shortstop Brendan Ryan wasn’t sure if in some ways that wasn’t a little better.

“It was kind of fun to get so many people involved,” Ryan said after the Mariners used six pitchers to no-hit the Los Angeles Dodgers in a spellbinding 1-0 victory in front of 22,028 spectators at Safeco Field on Friday night. “It just felt like a really collective team effort.”

(PHOTO: Seattle Mariners pitcher Kevin Millwood had a no-hitter through six innings, but left the game with a leg injury prior to the start of the seventh against the Los Angeles Dodgers at Safeco Field in Seattle, Washington, on Friday, June 8, 2012. Five relievers followed Millwood to complete the no-hitter in a 1-0 win over the Dodgers.)

The game tied the major league record for the most pitchers used in a no-hitter, accomplished once previously in 2003 by the Houston Astros, and was the 10th combined no-hitter in major league history.

It was the first combined no-hitter in Seattle history as its others were solo efforts — Randy Johnson against Detroit on June 2, 1990 against the Tigers (a 2-0 Mariners victory) and Chris Bosio on April 22, 1993 against Boston (a 7-0 Mariners triumph), each at the Kingdome.

That it wasn’t quite the usual rout to history, though, hardly seemed to matter in the end as the crowd rose to its feet and roared as new closer Wilhelmsen got Andre Ethier to ground out to second to end the game.

Wilhemsen said he was so focused on what he was doing that he “put to the side” the potential history at stake.

It was only later in the clubhouse that he said it really began to hit him.

Millwood said he was a little frustrated not to be able to finish but that he had no choice after suffering the injury on the second-to-last pitch he threw in the sixth to Tony Gwynn.

He said he barely made it through the next pitch, which got Gwynn striking out swinging.

Millwood went out for the seventh, threw one warmup pitch, and then called out manager Eric Wedge to say he couldn’t go on.

“I couldn’t push off,” he said. “It would have been stupid to stay out there.”

Millwood struck out six in six innings and there was nothing that was really close to a hit other than a Dee Gordon bunt in the fourth that third baseman Kyle Seager turned into a bare-handed gem. Millwood’s only base runner allowed was a walk on a full count in the fifth to Juan Rivera, who was erased on a double play on the next pitch.

Once Millwood left, though, things got a little hairy.

“Yeah, we knew (about the no-hitter),” Pryor said. “But we weren’t talking about it (in the bullpen). We didn’t want to jinx it.”

Furbush came on first and after getting an out, threw wild to first on a grounder that allowed Elian Herrera to get to second. But Furbush then struck out Etheir and Pryor, in his just his fourth major league game, struck out Rivera.

The Mariners then got the one run they needed to beat the Dodgers, who came in with the best record in baseball, in the seventh on a two-out single by Seager off the glove of shortstop Gordon that scored Ichiro from second.

Pryor started the eighth and promptly walked Bobby Abreu on five pitches and Jerry Hairston on four bringing on rookie lefty Luetge — who came in having not allowed a run in 20 games and 13 1/3 innings this year — to face lefty James Loney.

Loney bunted the runners to second and third, bringing up right-hander A.J. Ellis.

That brought on the right-handed League, the fifth pitcher for the Mariners, and now in a setup role after losing his closer’s job two weeks ago.

League, though, had closer’s stuff on this night. On an 0-2 pitch he got Ellis to hit a soft fly to left where it was caught by Chone Figgins, who had just come on as a defensive replacement for Mike Carp. Pinch-runner Alex Castellanos was held at third as Figgins fired a strike home.

League then struck out Gwynn swinging, the last pitch an 86 mph splitter.

“As good as I’ve seen him,” Wedge said of League.

Wilhemlsen then faced the top three hitters in the Dodger lineup, and Los Angeles immediately came as close to a hit as it did all night on Gordon’s grounder to Ryan, who had just entered as a defensive replacement.

Ryan charged and threw to first, where Gordon used his speed to turn it into a close play with first-base umpire Ted Barrett calling him out.

“Pretty close, pretty close,” Ryan said. “I didn’t get a real good look at it on video. But who cares? He’s out at this point.”

Herrera then hit a liner right to Ryan for the second out, bringing up Ethier. On the second pitch, he hit an easy grounder to second baseman Dustin Ackley whose throw capped the second no-hitter this season at Safeco.

The first was a perfect game by Chicago White Sox Philip Humber on April 21. The Mariners, obviously, liked this one a lot better.

“It’s not the typical way you want to be a part of (a no-hitter) where your starter goes out because of an injury,” League said. “But if it happens that way, so be it.”