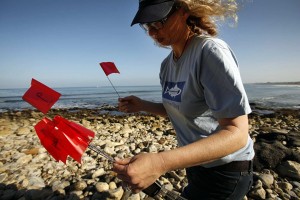 LOS ANGELES — The search for debris from the Japanese tsunami — already making landfall in Canada, Alaska and the Pacific Northwest — has begun in earnest in Southern California.

Staffers for the environmental group Heal the Bay began systematic surveys Friday of the Los Angeles County coastline, searching for objects that may have been dragged to sea by tsunami waves that devastated Japan more than a year ago.

(PHOTO: Meredith McCarthy, Director of Programs with Heal the Bay, places red flags to mark the beach in Palos Verdes Estates, California, where tsunami debris from Japan was found on Friday, June 8, 2012.)

But if the first day of patrolling the kelp-strewn cobblestones of Malaga Cove was any indication, the debris that has drifted across the Pacific to the West Coast — and so far has included a soccer ball, a motorcycle and a 66-foot-long dock — has yet to hit Southern California.

Heal the Bay staffers Sarah Sikich and Meredith McCarthy on Friday picked over a 100-meter stretch of shoreline with measuring tape, clipboards, red flags and a GPS device, recording every piece of trash. There was plenty to be found: Plastic bags, water bottles, food wrappers, a wine cork and shards of foam cups lodged in the rocks.

“Any flotsam from Japan?” a surfer inquired as he moseyed by.

“It’s highly unlikely we’ll find anything related to the tsunami,” Sikich said. “But you never know.”

For the next two years, the Santa Monica-based group will conduct monthly surveys at Malaga Cove in Palos Verdes Estates and Carbon Beach in Malibu, shores selected because they are largely ungroomed and somewhat secluded. The nonprofit joins a network of groups from California to Alaska monitoring the shoreline for tsunami debris and reporting what they find to the National Oceanic and Atmospheric Administration.

The groups involved with the monitoring do not plan to collect pieces of tsunami debris unless they are personal items that could be returned to someone in Japan.

Although potentially hazardous objects could wash ashore, such as fuel tanks or insecticide canisters, there is no evidence any debris is radioactive because it was swept to sea before the nuclear disaster at Fukushima.

Scientists estimate that between 1 million and 2 million tons of debris has dispersed across the Pacific Ocean since the magnitude 9.0 earthquake unleashed destructive tsunami waves in March 2011.

Perhaps 5 percent of that material is expected to make it to the West Coast, though a leading edge of debris, pushed by winds and currents, has begun arriving much earlier than predicted by computer models.

How much will be carried south of Point Conception and into Southern California is unclear. Suspected tsunami debris may be difficult to distinguish from the flotsam that floats into Los Angeles, Orange County and San Diego counties every day.

Having a detailed record of the amount of garbage being swept onto local beaches now could help gauge any influx resulting from the tsunami, said McCarthy, Heal the Bay’s director of programs.

“If the numbers start to spike or the type of material starts to shift,” she said, “it will be a good indication we’re looking at something new.”