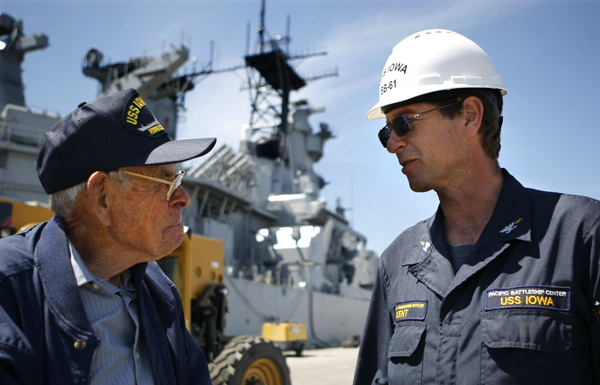 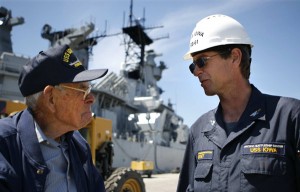 LOS ANGELES — When the big guns of the battleship Iowa pounded Japanese troops during World War II, John Wolfinbarger could feel it in the boiler room deep below decks.

It was 1944, and Wolfinbarger was 19. He was a Colorado boy who suddenly was in the sweltering Pacific, his ship shuddering with each blast. Every couple of days, he’d have to crawl into a hot boiler and scrape burnt fuel oil from its pipes. It was grimy, cramped, tedious work — and he treasures the memory of it, just like a legion of other former Iowa sailors who will salute the ship Saturday as it’s towed two miles to its permanent home as a waterfront museum in San Pedro.

Wolfinbarger, 88, will be among the hundreds of Iowa veterans on hand.

Sailors often get misty over old ships, and those who served on the biggest U.S. battleship ever built are no different. The nearly 70-year-old Iowa played a crucial role in their lives, and its story can be told in the everyday experiences of unsung men like Wolfinbarger.

Wolfinbarger first hauled his sea bag aboard the Iowa in the Marshall Islands.

His immediate impression was that of any other swabbie surveying a great, gray vessel 15 stories high and almost as long as three football fields.

Wolfinbarger, who later went to work in coal mines and sawmills, slept outside on the teakwood deck instead of in the hot, crowded quarters below. For nearly two years, he rolled out a blanket under one of the ship’s famous 16-inch cannons that could hurl 2,700-pound shells more than 24 miles.

When the Iowa was attacking the Japanese stronghold of Saipan, Wolfinbarger was stationed high in a crow’s nest. It was the only battle he witnessed, and he hated it. Even worse was the aftermath, with broken bodies bobbing near the beach, families who hurled themselves off cliffs rather than endure what they thought would be American torture.

“It was horrible,” Wolfinbarger said. He spent the rest of his tour down in the boiler room.

Four years after being present for the 1945 Japanese surrender in Tokyo Bay, the Iowa was decommissioned by a Navy trying to cut costs. It returned to duty in 1952 and soon was dubbed “the gray ghost of the Korean coast.”

Richard Blair remembers it well. He had a number of jobs in his 45 months on the Iowa, including handling phones for its commanding officer during battles in the Korean War.

“I spent my 19th birthday in Wonsan Harbor and we were firing day and night, day and night,” said Blair, a retired banker and medical office manager. “That day — Aug. 19 — I spent about 12 hours on the bridge with the captain, and we blew up everything we possibly could.”

The Iowa picked up downed fliers and came to the aid of ships that were hit. Blair, 78, of Lancaster, was helping to transfer wounded sailors from a stricken destroyer “when, suddenly, these bundles started coming over — bundles wrapped in rope with a tab that said something like ‘Johnny Jones, 18.’”

Combat lasted eight months. The rest of the time there were plenty of spit-and-polish chores but also a world of new experiences at ports in the Caribbean, the Mediterranean and elsewhere.

Blair was on the USS Iowa swim team that won an Atlantic Fleet title. He remembers “The Ed Sullivan Show” broadcasting from the Iowa, with ventriloquist and acrobats. As a chaplain’s assistant, he organized Christmas parties for orphans in Norfolk, Va.

“I was the lucky guy who got to go out and buy the toys,” said Blair, who later ran a Scout troop in San Fernando for 25 years. “And I got to pick one of the big guys from the crew to be Santa.”

The uneasy peace of the Cold War had taken root by the time Bernie Kopell, a 24-year-old novice actor from Brooklyn, hopped aboard in 1956.

“I don’t like to talk about my heroism,” said Kopell, “but what the hell: I was a librarian. I kept America safe from overdue books!”

Kopell, now 78 and living in Tarzana, went on to TV fame as Dr. Adam Bricker, the skirt-chasing ship’s physician on “The Love Boat.”

The Iowa was a looming presence at NATO exercises and in ports around the world, but the world was changing.

At a bar on the naval base at Guantanamo Bay, Kopell and some buddies were talking politics.

“There were rumors going around about this guy in the hills who was planning to come down and take over the country,” Kopell said.

The sailors, gazing down at the Iowa and other U.S. warships anchored in the bay, were incredulous.

Meanwhile, the era of U.S. battleships was again declared over. The Iowa was decommissioned a second time in 1958 and stayed anchored off the Philadelphia Navy Yard for most of the next 26 years.

To beef up a dwindling Navy, President Ronald Reagan ordered the Iowa restored, rigged with Tomahawk and Harpoon missiles, and, at a cost of $350 million, sent back to sea in 1984.

In 1986, Reagan stood on the Iowa’s deck in New York Harbor for festivities marking the Statue of Liberty’s 100th birthday. The battleship’s guns were silent for fear of shattering windows in lower Manhattan.

In all its years at sea, the Iowa suffered only two minor hits by enemy fire. Its greatest tragedy was in peacetime, when a gun turret explosion in the Caribbean killed 47 sailors.

The Navy laid the blame for the 1989 accident on a sailor who was allegedly distraught over a failed relationship with another man. Officials backpedaled two years later, saying the blast’s cause could not be determined.

Peter Sunshine, a 20-year-old Navy journalist, was supposed to be in Turret Two that day. Instead he agreed to make chicken soup for a shipboard Seder and was heading up a ladder, chicken in hand, when the ship was rocked.

“It was almost surreal at first,” said Sunshine, 42, who runs a coupon website in Cleveland, Tenn. “Everyone was scrambling to suit up or help people suit up. We were listing a bit to one side and our concern was that the ship would become one big grenade.”

Sunshine helped crews drag fire hoses into the blazing turret. He did triage, picking out the most seriously injured sailors for immediate treatment. He helped care for the dead.

Over a loudspeaker, a voice called out the names of the missing, ordering them to report. Sunshine’s name was mistakenly among them.