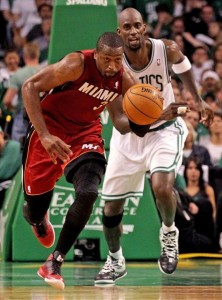 BOSTON — The Miami Heat are one step away.

One step from the sole reason for these past 12 months:

It won’t be easy in Saturday’s Game 7 of these best-of-seven Eastern Conference Finals against the Boston Celtics at Miami’s AmericanAirlines Arena, because it took just about the best of LeBron James in Thursday night’s 98-79 Game 6 victory at TD Garden, with James exploding for 45 points, four off his career playoff high and one off Dwyane Wade’s franchise playoff record set in 2010 against the Celtics.

(PHOTO: The Miami Heat’s Dwyane Wade pounces on a turnover in the the second quarter as Kevin Garnett of the Boston Celtics pursues in Game 6 of the NBA Eastern Conference Finals at TD Garden in Boston, Massachusetts, on Thursday, June 7, 2012.)

“I think what fuels him is this moment,” Heat coach Erik Spoelstra said. “And the moment will define you.”

Now tied 3-3, there finally is a chance to put these pesky Celtics away and then move on with the last steps needed to erase the memories of last season’s NBA Finals demise against the Dallas Mavericks.

“Now we have a series. That’s what everybody wants, right?” Spoelstra said. “We want to respectfully go back to our corner and get ready for Game 7.”

The Heat know they have history on their side, with home teams dominant in Game 7s.

But more than anything, what the Heat have now is hope.

And James on their side.

“He was absolutely fearless tonight and it was contagious,” Spoelstra said.

“He played amazing,” Wade said. “He was locked in from the beginning of the game like I’ve never seen before.”

Making 12 of his first 13 shots and never looking back, James had 30 points by halftime, his highest-scoring first half ever in the playoffs.

“I felt like I was aggressive from the opening tip,” he said. “It’s a great feeling to be in, when you feel like everything you put up is going in.

“I was happy that we were able to put together a complete game for the first time in this series.”

And he sees more to come.

“No matter what the stat sheet says, I won’t regret Game 7,” he said.

By the time he finally sat at the end of Thursday’s fourth quarter, he also had 15 rebounds and five assists on his final ledger.

But even more than numbers, he now has his first road elimination-game victory, another step toward extinguishing questions about his fortitude.

“He was fearless in the game and everybody followed from there,” Spoelstra said.

The question now is whether the Heat will be coming home to stay, with the NBA Finals to open Tuesday in Oklahoma City, with Kevin Durant and the Thunder having punched their ticket with Wednesday’s Game 6 victory over the San Antonio Spurs in the Western Conference finals.

“We just want to retreat, go back to our corner, and get geared up for the next game,” Spoelstra said.

With Chris Bosh with a larger role in the rotation than his Game 5 return from a three-week injury absence, the Heat regained the look of a Big Three with enough life left to push past a previous championship Big Three. Bosh closed with seven points and six rebounds in 28 minutes.

While this mostly was about James, Wade came around enough from another awful start to add 17 points on 6-of-17 shooting, with de facto starting center Udonis Haslem adding nine rebounds.

“This is the most locked-in I’ve seen our team,” Wade said.

“He couldn’t get the ball to drop down, as much as he wanted to,” Spoelstra said. “But I think he was getting cleaner looks that he had earlier in the series. I think that’s something to build on.”

Point guard Rajon Rondo paced the Celtics with 21 points and 10 assists, but forward Paul Pierce struggled to a 4-of-18 close from the field for nine points. Celtics center Kevin Garnett was limited to 12 points and five rebounds.

“The good news is we get to do it again,” Celtics coach Doc Rivers said. “The bad news is we have to do it on the road.

“We left a huge opportunity on the floor, but we still have another opportunity.”

The Heat now have nine playoff road victories the past two seasons, most in the NBA. It is something they will need should they advance to the Finals, with the Thunder holding homecourt advantage in the series that will be played on a 2-3-2 basis.

With the victory, James improved to 3-6 in playoff elimination games, with the hope of improving to 4-6 Saturday. He entered averaging 29.7 points in elimination games, behind only the 31.3 of Michael Jordan, the 31.1 of Wilt Chamberlain and the 29.8 of Allen Iverson.

“I thought he gave them comfort in the way he played tonight,” Rivers said. “We, on the other hand, never really established what we wanted to do offensively. “Each guy wanted to win the game for us, which is a good trait. The bad trait is there was no ball movement.”

After losing 15 of their previous 16 visits to TD Garden, the Heat finally broke through on the road in this series, after dropping their previous two visits.

“I hope now you can stop talking about Lebron how he doesn’t play in big games,” Rivers said. “Now that’s to bed.”

And so, for at least two more days, the talk of whether Spoelstra will be retained, whether the Big Three would be disassembled, has been put on hold.

“Nobody likes getting dirt thrown on your face before you’re not even dead,” Spoelstra said.

Instead, the Heat have the opportunity to become the ninth team since 1987-88 to win a playoff series despite losing three consecutive games during the series.

For his part, James became the first player to score 25 or more in eight consecutive playoff games against the Celtics since Los Angeles Lakers center Kareem Abdul-Jabbar from April 28, 1974 to May 27, 1984.

James had never previously scored more than 23 points before halftime in a playoff game while with the Heat.

Up 55-42 at halftime, the Heat pushed their lead to 17 in the third quarter, went into the fourth quarter up 13 and then extended the advantage to 18 on a Shane Battier 3-pointer early in the fourth quarter, effectively ending it.

James played 44:49 only because of the eventual magnitude of the rout.

“I told him yesterday it was going to be at least 46,” Spoelstra said.

James was practically perfect in the first half, numbers that could have been higher had he not gone 5 of 9 from the line over the opening two periods. He became just the sixth player to score 30 or more in the first half of a playoff game over the last 15 years.

Other than James, the rest of the Heat shot 9 of 25 in the first half.

It was all James early, with 14 first-quarter points on 6-of-7 shooting, as the Heat took a 26-16 lead into the second period.

The problem was Wade got off to yet another shaky start, scoreless on 0-for-4 shooting in that first quarter. On the ESPN pregame show, Magic Johnson said, “Dwyane Wade, something’s wrong. I don’t know if he’s hurt.” The 0 for 4 dropped Wade to 7 of 23 from the field in the first quarters of games this series.

Bosh entered with 5:29 to play in the first quarter and moved well, converting an alley-oop layup and a 20-foot jumper on his only attempts of the opening period.