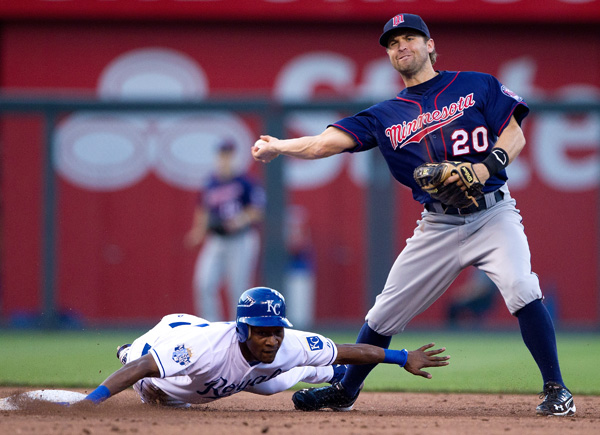 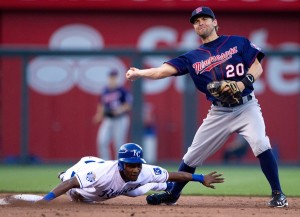 Nick Blackburn pitched five innings, Justin Morneau delivered the key hit, and their bullpen did the rest Wednesday night, as they defeated the Royals 4-2 at Kauffman Stadium.

(PHOTO: Kansas City Royals’ Jarrod Dyson (1) reaches out after being forced out at second by Minnesota Twins shortstop Brian Dozier (20) who didn’t get the throw to first in time as Humberto Quintero was safe in the second inning during Wednesday’s baseball game on June 6, 2012, at Kauffman Stadium in Kansas City, Missouri.)

Maybe it doesn’t sound like much. It’s worth noting that the Twins managed to win five consecutive series last June and again last July but still finished 63-99. But there were times when this team looked like the Twins wouldn’t win two series in a row, let alone three.

The key to their recent success has been pitching. Their starters have been better, and their bullpen has been outstanding.

Blackburn left with a 3-2 lead. Jeff Manship pitched a scoreless sixth, Jared Burton got four outs (three via strikeout), Glen Perkins got the final two outs of eighth inning, and Matt Capps pitched the ninth for his 14th save in 15 chances.

On the six-game road trip, Twins relievers combined to allow one run in 21 innings, for a 0.43 ERA.

The Twins expected a tough matchup against hard-throwing Royals righthander Felipe Paulino, but he departed the game in the first inning with a strained right groin.

Paulino had a 1.70 ERA, compared to 5.59 for his replacement, Luis Mendoza, so it seemed like a favorable swap for the Twins. But Mendoza was tough on them for a while.

Ryan Doumit hit a chopper that bounced off first baseman Eric Hosmer’s glove and rolled into fair territory for an RBI double, giving the Twins a first-inning lead, but the Twins didn’t score again until the fifth.

That first-inning lead didn’t even last two batters for the Twins. Blackburn, who had been on the disabled list with a strained left quadriceps muscle, started off very shaky in his return.

Alex Gordon hit a leadoff single, and Yuniesky Betancourt followed with a two-run homer to left field. Blackburn needed 53 pitches to get through the first two innings before settling into a groove.

With Blackburn cruising, Morneau lined a two-out, two-run single to left-field in the fifth inning, putting the Twins back in front 3-2. That gave Morneau 31 RBI for the season, one more than he had last year.

Blackburn needed to get through one more inning to be in position for the win. It wasn’t easy. He walked Gordon on four pitches with one out, and a two-out single by Billy Butler put runners at first and third, with the Royals’ hottest hitter, Mike Moustakas, coming to the plate.

Gardenhire usually gives his starters a chance to get the win in those situations, if he feels like they’ve earned. Blackburn rewarded Gardenhire for his faith, as Moustakas flied out to right field, ending the inning.