Kings fail to finish off the Devils in Game 4 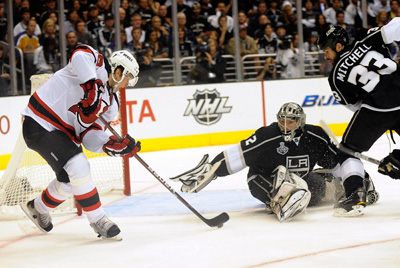 LOS ANGELES — And so, the Stanley Cup was spirited back into the night.

The Cup and its handlers left the once-festive building, as did the New Jersey Devils, leaving Staples Center with a 3-1 victory over the Los Angeles Kings in Game 4 of the Stanley Cup Final on Wednesday night.

(PHOTO: The New Jersey Devils’ Patrik Elias, left, scores on Los Angeles Kings goalie Jonathan Quick in the third period in Game 4 of the Stanley Cup Finals at Staples Center in Los Angeles, California, on Wednesday, June 6, 2012. The Devils won, 3-1, to stay alive in the series.)

With that, the Devils took the buzz out of the arena, stopping the celebration-on-deck party, 45 years in the making. Kings’ fans patiently have waited that long for the franchise’s first Stanley Cup, and now it will be at least a delay of three more days for the champagne and nerves to stay on ice.

(You can assume that some of the fans have broken it down to hours, minutes and seconds.)

Game 5 will be on Saturday night in Newark, N.J. While the Kings still maintain a tight hold on the best-of-seven series, leading three games to one, the Devils were relishing the first blow against the previously unstoppable-looking Kings and their star goalie, Jonathan Quick.

“To win two, three, especially four in a row in the playoffs is very tough. Especially against a team of that caliber.”

Said Quick: “You’re trying to end a team’s season. They’re not going to go down easily.”

The Kings are 15-3 in the playoffs, all losses coming at home, and the rare occasions they have faltered occurred in elimination games. They failed to close out Vancouver in Game 4 in the first round and the Coyotes in Game 4 in the Western Conference Final.

“I think we wanted to make them jump on a plane and come to New Jersey. We had to go, anyway. Might as well get a game over there,” said Devils goaltender Martin Brodeur, smiling.

All of the game’s goals came in the third period, and the three goals that New Jersey scored were like an offensive explosion, considering they scored two in the first three games of the Final.

Defenseman Drew Doughty, the only player with a point in each game of the Final, had the lone Kings’ goal, beating Brodeur with a shot through traffic to tie the score, 1-1.

It came on the power play, just a minute after Patrik Elias, on a rebound, had given the Devils their first lead of the series.

The last goal was an empty-netter by the Devils’ Ilya Kovalchuk.

Rookie forward Adam Henrique, who has been delivering decisive blows all spring, scored the game-winner with 4:31 remaining, taking a pass from David Clarkson off his skate and beating Quick, stick side, to make it 2-1.

What started the sequence was a miscue between the Kings’ defensive pair of Willie Mitchell and Slava Voynov. “Misplay between the defensemen,” Kings coach Darryl Sutter said. “Not a coverage play. Can’t make those long passes and think you can get away with it.”

Henrique has scored three-game winning goals, including two series-clinching goals in the playoffs.

“There are no quitters on this team,” Kovalchuk said. “This was a big win. Now we have to go back and regroup. We need to win again.”

The Kings are 10-0 on the road and won the first two games of the Final at New Jersey, both in overtime. Two standards are safe for another year: Edmonton’s 16-2 mark in winning the 1988 Stanley Cup, and Detroit’s being the last team to win the Cup in four straight games, which it did in 1998 against Washington.

Said Brodeur: “We’re pretty happy to live another day, there’s no doubt about that. We just wanted to play well and see where it brings it. We know the road ahead is the most difficult we can face.”

Thus, the Stanley Cup, all spiffed up and ready to be awarded, will be getting some more frequent flier miles.