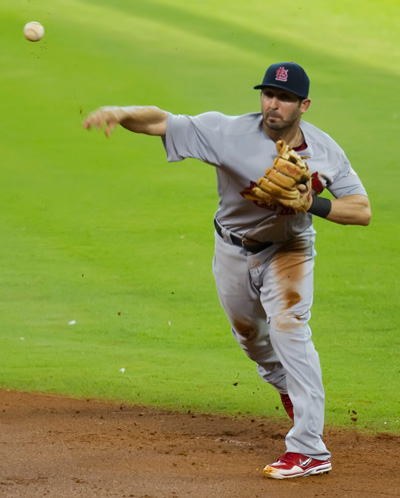 HOUSTON — For the better part of the past week, Cardinals manager Mike Matheny has talked about wanting his retooled bullpen to “define itself.”

On Wednesday, he needed it to happen.

(PHOTO: Second baseman Daniel Descalso (33) of the St. Louis Cardinals throws out Mike Barnett (31) of the Houston Astros in the first inning of their game on Wednesday, June 6, 2012, in Houston, Texas. )

The Cardinals struck early for a lead and got through the middle with starter Adam Wainwright, but they survived late because of the relievers. Helped by a slick defensive rescue by Daniel Descalso, the Cardinals’ bullpen piloted the team to a 4-3 victory against Houston at Minute Maid Park.

A day after having to shoulder six innings because of Jaime Garcia’s struggles, the bullpen needed to throw 31/3 to outlast the Astros.

Every Cardinals reliever faced at least one batter with the tying run on base.

“We burned through (the relievers) a bit. That’s probably something we’re going to have to do here for a while,” Matheny said. “Those are the roles they’re a little more used to. It beats them up over the long haul. But you have a game like that you have to pull it out, and you pull out all stops at that point.”

Jason Motte took over in the eighth inning for his second four-out save in three days. With the tying run at second base, he torched Fernando Martinez with a 99-mph fastball that ended the eighth inning. Motte faced the potential winning run in the ninth with no outs and got a key double play that secured his 10th save.

The closest the Astros got to tying the game against the Cardinals’ bullpen was inches. Enter Descalso.

In the eighth, pinch-hitter Marwin Gonzalez dropped a sacrifice bunt attempt down the first-place line to move the potential tying run to second. Matt Adams fielded the ball, but threw too high to Descalso at the base. Gonzalez was awarded a hit, but he wasn’t the issue. From first base, catcher Jason Castro was racing toward home as Descalso had to turn into the foul territory down the right-field line to get the ball.

In one motion, Descalso retrieved the ball and fired a strike to Yadier Molina at home plate. The throw and the tag greeted Castro as his cleat neared the plate.

“Incredible play. Turnaround, pretty much a blind throw,” Matheny said of Descalso’s play. “That was the game.”

Allen Craig boosted the Cardinals to the early lead with an RBI single and solo homer. After that, the Cardinals couldn’t get anything going because of a rash of strikeouts. They struck out 15 times in the game. That one-run lead, the result of Craig’s homer, was all five relievers would have to work with. Each out was essential. Victor Marte allowed one of the two runners he inherited from Wainwright to score. Eduardo Sanchez pitched two-thirds scoreless. Marc Rzcepzynski allowed a infield hit to his one batter. Mitchell Boggs picked him up and tossed a scoreless inning thanks to Descalso’s play.

The hex Houston’s Bud Norris held over the Cardinals as a budding fireballer has cooled with time, and they’ve actually had some success against the righty in recent games. In two of his past four decisions against the division rival — a span that dates back to 2010 — the Cardinals have defeated Norris. Before he could find his rhythm Wednesday and take advantage of a Texas-sized strike zone, the Cardinals jumped for what seemed like enough runs for a third win against Norris.

Descalso connected for a home run on the fifth pitch Norris threw.

Carlos Beltran followed with a double. He scored on Craig’s single, and Craig scored on David Freese’s double into the left-field corner. Before he threw a pitch in the game, Wainwright had a 3-0 lead. That would swell to 4-0 when Craig launched his seventh home run of the season — this one finding an open seat in the Crawford Boxes beyond left field at Minute Maid Park.

The next five innings were blur of strikeouts.

There has been a bad whiff about the Cardinals throughout this road trip, and not just because they lost six of the first eight games. During the four-game series in New York the Cardinals struck out 41 times. The final game there, a win, still marked the seventh consecutive game with more than eight strikeouts. That set a new franchise record.

Norris would strike out a dozen Cardinals without a walk in Wednesday’s game. The 12 K’s were a season-high for an Astros’ pitch, and it was the most for a single pitch against the Cardinals since Cole Hamels had that many for the Phillies back in 2006.

The veteran umpire was giving ample space on both side of the plate, especially to the fastballs fired Norris and Wainwright. The zone left the hitters unable to choose between protecting the outside edge of the plate or being sure to swing the pitches off the inside of the plate. The result was a growing number of called strikes.

That K and others helped Wainwright pitch around two errors in the field by two of his surest-handed fielders. Rafael Furcal had a throwing error in the second inning. Carlos Beltran dropped a fly ball in right field in the third.

Neither of the errors hurt the Cardinals on scoreboard as Wainwright held the Astros without a hit through 4 1/3 innings. A triple by Chris Johnson with one out in the sixth inning was the beginning of the righthander’s end. He was able to get that fourth called a strike three for the second out of the inning with only one run in, Johnson’s. That brought up the No. 8 hitter, Jason Castro, with Norris or a pinch hitter looming. Wainwright couldn’t get either out.

Castro singled to prolong the inning and pinch-hitter Brian Bogusevic chased Wainwright from the game with an RBI single.