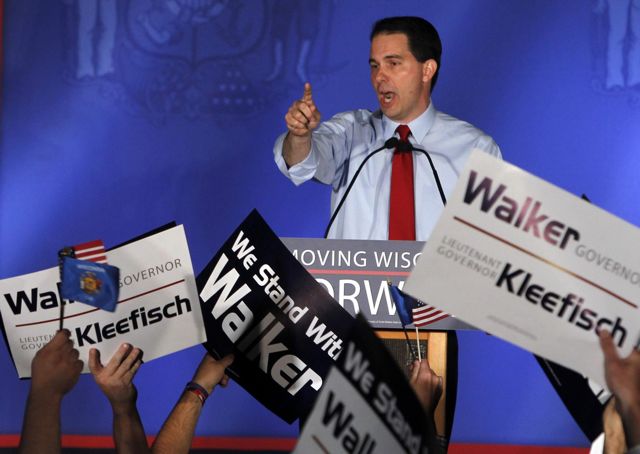 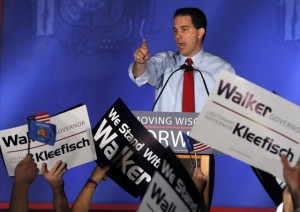 MILWAUKEE — Wisconsin Gov. Scott Walker appeared to beat back a fierce recall effort Tuesday, according to network and news service projections, ending a bitter campaign and gaining the upper hand in an ideological struggle over budget slashing and union power in Wisconsin.

Ballot counting was slow after a day when voters in this highly polarized state swarmed the polls to vote for Walker or Democratic challenger Tom Barrett.

(PHOTO: Governor Scott Walker celebrates after his win over Tom Barrett in the recall election at an Election Night rally at the Waukesha Expo Center in Waukesha, Wisconsin, on Tuesday, June 5, 2012.)

CNN reported that exit polls showed a dead heat, with Walker and Barrett each the choice of 50 percent of those surveyed. Walker jumped to a strong lead in early vote tabulation, but the Democratic strongholds of Milwaukee and Madison were slow to report and the gap was expected to tighten.

Despite the network projections, Barrett had not conceded by 10 p.m. and Walker had not yet appeared at his election night party in suburban Waukesha.

But Walker’s lieutenant governor, Rebecca Kleefisch, who appeared to have beaten back a recall effort against her as well, did make a brief statement to the cheering crowd. “Years from now they will say the campaign to save America began tonight in Wisconsin,” she said. .

With just under half the vote counted, Walker held leads in all but a handful of Wisconsin counties. In Waukesha, a Milwaukee suburb that is probably the state’s most heavily Republican area, of the state, Walker was grabbing nearly 3 out of every four votes. On the flip side, Barrett was winning handily in heavily Democratic Dane County, home of state capital Madison, but his margin over Walker was not as large.

There were long lines at many polling places as they closed at 8 p.m., with many first-time voters waiting to sign up in a state that allows same-day registration and voting. Election officials said those in line by closing time would be allowed to cast ballots, and 90 minutes later many were still queued up as networks began calling the race for Walker.

Some Milwaukee precincts nearly ran out of ballots and had to send out for refills.

The Wisconsin contest, just the third time in U.S. history that a state has voted whether to recall its governor, piqued interest across the nation—in great measure because it highlighted the sharp ideological divide likely to dominate the presidential election in November.

Front and center were Walker’s vision of small, austere government and epic clashes with public employee unions, at the center of a recall petition drive that netted more than 900,000 signatures.

The recall also gave full flower to the effect of the Supreme Court’s controversial Citizens United decision, which gave a green light to an unprecedented wave of political fundraising, much of it anonymous and generally tilted in favor of conservative candidates.

Walker outraised Barrett by at least 8 to 1, and between the candidates and outside interest groups spending on the race has been clocked at $63 million and counting.

Pundits and partisans across the nation also were looking to the results for clues about the future of the tea party movement, organized labor and the outcome of the battle between President Barack Obama and Republican challenger Mitt Romney. Wisconsin is considered a swing state in the fall.

But while the early exit polls reported by CNN indicated the governor’s race to be squeaky tight, they showed Obama favored by a slight majority of those surveyed.

In Washington, presidential spokesman Jay Carney downplayed the notion that the Wisconsin results would translate easily into the race for the White House. “A race where one side is outspending the other by a ratio of at least 8 to 1 probably won’t tell us much about a future race,” Carney said.

Romney was swift to congratulate Walker after networks projected him as the winner. “Tonight’s results will echo beyond the borders of Wisconsin,” the Republican presidential nominee said in a statement. “Governor Walker has shown that citizens and taxpayers can fight back — and prevail — against the runaway government costs imposed by labor bosses.”

Although Walker held a narrow lead in most late polls, both Republicans and Democrats predicted that actual vote tally would be close and would hinge on the ability of each side to rev up grass-roots efforts to get their voters to the polls. And rev up they did.

“I think we’re having presidential (election) turnout,” said Kenosha County Clerk Mary Schuch-Krebs as she watched voters flood to polling places in her southeastern county along the Illinois border.

Voting was reported to be especially heavy in Milwaukee and Dane County. At the same time, Republican rich suburbs near Milwaukee also experienced a voter deluge.

Tuesday’s battle was effectively a redo of the 2010 race for governor between Walker and Barrett, which Walker won by 5 percentage points.

Four Republican state senators also were defending their seats, and just one GOP loss in those contests would transfer control of the state senate to Democrats. In theory that could hold the potential to thwart Walker, but the legislature is out of session and not scheduled to meet until after the November elections, when Republicans would have another shot at regaining power.

The Republicans appeared to be holding their seats based on early returns.

The recall was an outgrowth of political turmoil that erupted within weeks of Walker talking office as he teamed up with a Republican-controlled legislature to close a budget deficit via steep cuts in spending, including money for schools. At the same time, the governor and legislature extended tax breaks for businesses.

Even more significant were moves to strip public employees of collective bargaining rights, something Walker said was vital to give public officials flexibility to cut costs and save money for taxpayers.

The unions viewed that as an attempt to destroy them as punishment for throwing political support to Democrats.

In Kenosha,veteran poll workers said they had seen many first-time voters come in to register before casting ballots, including a man in his 80s.

Many voters seemed relieved the election had finally come, and voiced disgust with the recall process. “There are too many recall elections that have been going on in the state and it needs to be stopped,” said Carolyn Gral, a Walker supporter and homemaker who is looking for a job.

At Ron’s Barber Shop in Walker’s childhood hometown of Delavan, Ron Tesch said he wouldn’t hazard a guess as to who would win the recall race. Walker or his Democratic challenger, Milwaukee Mayor Tom Barrett. Tesch’s profession as a barber makes him an informal pollster of sorts, but no clear winner has emerged from the data comments overheard collected in his shop.

Like many others in this bitterly divided state, Tesch declined to say for whom whohe voted. for. He did recall letting Walker ride in the back of his convertible during a parade when Walker was in high school.

Dave Abell, of Delavan, also declined to discuss his vote, but he said the recall, with its implications for unions, state employees and small-business owners, among others, has made it hazardous to discuss politics.

“You don’t want to talk about it with your friends because you won’t have friends anymore,” he said.

Barrett predicted the heavy turnout would work in his favor.

“Obviously the lines are very, very long, which we take as a very encouraging sign. People are engaged in this,” Barrett said Tuesday, according to The Associated Press.

For his part, Walker said he thought Wisconsin voters were just happy to see the election finally drawing to a close.