Rare inside view of four days of Syria fighting 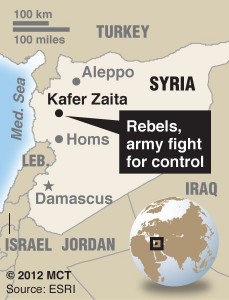 KAFER ZAITA, Syria — For four days, Syrian army units and armed rebels of the Free Syrian Army fought for control of this town in a battle that demonstrated the strengths and weaknesses of both sides. In the end, the rebels abandoned their positions, but only after fighting off multiple assaults by the army.

Rebel commanders said they suffered only one killed in the fighting, a testament to the questionable marksmanship of the Syrian soldiers they faced.

It was impossible to determine, from positions with the rebels, how many Syrian soldiers had died, but the fighting came during a particularly bloody period for the Syrian military. The official news agency SANA listed the names of 94 soldiers who’d been killed over the four days that encompassed the battle here, marking a continuation of a trend of increasing Syrian military casualties. More than 100 Syrian soldiers and police died in clashes with rebels in the just first five days of June, according to the SANA reports, compared with 404 in May, 363 in April and 176 in March.

The fighting began at midafternoon Saturday, following a visit to the town by the Hama-based United Nations observer team. The catalyst for the fighting was unclear. The Syrian army controls a large command post inside the town, built around a fort remaining from the French occupation era. Free Syrian Army fighters claimed that the battle began when loyalist troops at the command post started shelling the town as a reprisal for the U.N. monitors’ visit.

Rebel units from the surrounding countryside responded to the local commander’s reinforcement request, and by the end of the first day of fighting an estimated 500 rebel fighters were positioned in the town. Fighting centered around the command post. A steady stream of civilians could be seen evacuating the town.

An imam preached on a mosque loudspeaker throughout the night, exhorting the rebel fighters and calling on Syrian soldiers to defect. Civilians provided the rebel fighters with food, drink, and the use of their homes as fighting positions and sleeping places.

On Sunday, the battle intensified. Rebel forces had encircled the Syrian army post during the night, and early in the morning the soldiers attempted to break out of their position utilizing tanks and armored personnel carriers. They were driven back into the stronghold by barrages of rocket-propelled grenades fired from a block or less away.

An apparent reinforcement effort by the Syrian army was thwarted when a rebel roadside bomb exploded outside the town, destroying an army armored personnel carrier. The remaining reinforcements retreated.

About 1 p.m., a massive explosion shook the town as rebel fighters detonated a remote-controlled vehicle containing 660 pounds of explosives against the command post wall. But the rebels did not take advantage of the blast to launch an assault, and the standoff continued. According to rebels, Syrian loyalists mounted a second effort to reinforce the outpost, but they never reached the town.

As the sun began to set, an attack helicopter appeared and delivered high-caliber automatic fire into the town, killing one rebel fighter and wounding another. A fire raged in the no man’s land between the opposing forces.

Facing an apparently endless standoff, the local Free Syrian Army and Syrian army commanders negotiated a truce. The bulk of rebel forces withdrew to their respective bases, and a memorial service was held for the killed fighter.

Late Monday morning, fighting resumed when two Syrian army helicopters attacked. Rebel forces in a nearby town planned to respond with fire from three truck-mounted heavy machine guns, but only one of the vehicles materialized to reach Kafer Zaita. Other rebel fighters attempted without success to target the helicopters with machine gun and rifle fire.

On Tuesday, rebels in Kafer Zaita reported that Syrian army and militia forces were moving into the town and requested reinforcement. But this time, at least three rebels units that had fought in previous days refused to respond, angry at what they perceived to have been an unequal burden in the previous days’ fighting. Tempers flared as several commanders conducted a heated conference in Madaya.

By noon, the remaining fighters who were in Kafer Zaita had withdrawn after spending several hours planting roadside bombs.