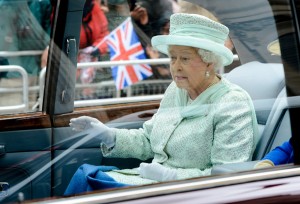 LONDON — Britain Tuesday ended four days of national celebrations to mark the 60-year reign of Queen Elizabeth II, tinged only by regret over the absence of Prince Philip, who was ill in a hospital.

A solemn thanksgiving service in St Paul’s Cathedral, described as the “spiritual finale” to the long weekend of celebrations, was followed Tuesday by scenes of jubilation in the streets of London.

Hundreds of thousands converged on the parks and roads surrounding Buckingham Palace to cheer a carriage procession along The Mall, the royal avenue, and a traditional balcony appearance by the royal family.

Commentators said the scale of the celebrations, during which people of all ages braved cold and damp weather to pay homage to the queen, had been “remarkable.”

Comparing the outpouring of popular affection to previous celebrations, the BBC’s royal commentator, Nicholas Witchell, said: “The royal family is clearly more united, more at ease among themselves and with the country.”

The queen, 86, is only the second monarch in history to mark a Diamond Jubilee. Queen Victoria, her great-great grandmother reigned for 64 years.

“Elizabeth the Great,” read some of the posters. “She’s a diamond,” said another.

In a video message posted on the White House website, U.S. President Barack Obama conveyed the “heartfelt congratulations of the American people” to the queen.

“While many presidents and prime ministers have come and gone, your majesty’s reign has endured,” said Obama. “May the light of your majesty’s crown continue to reign supreme for many years to come.”

However, the absence of Prince Philip was keenly felt throughout Tuesday. It was the first time that the Duke of Edinburgh, the queen’s husband for nearly 65 years, was not at her side during a milestone event.

The palace announced Monday, just hours before a massive pop concert was held for the queen in front of Buckingham Palace, that the 90-year-old had been taken to hospital with a bladder infection.

At Christmas 2011, Prince Philip suffered a heart scare and was taken to hospital to have a coronary stent fitted.

After visiting him in hospital Tuesday, his son, Prince Edward, said his father was feeling “a lot better” and was making “good progress.” The duke had watched the proceedings on TV.

About 2,300 people attended the church service, led by Rowan Williams, the archbishop of Canterbury, who praised the queen’s “selfless dedication” over six decades.

Prime Minister David Cameron said the celebrations over the past few days had demonstrated “the best of Britain.”

“We have seen the country come together with a sense of celebration and unity but also tremendous resilience,” he said.

Cameron was due to host a dinner later Tuesday for Commonwealth leaders who attended the celebrations.

The queen, clearly delighted by the affection shown for her, said in a special recorded message, to be distributed later Tuesday, that she had been “humbled” by the celebrations.

“The events that I have attended to mark my Diamond Jubilee have been a humbling experience … I hope that memories of all this year’s happy events will brighten our lives for many years to come.”