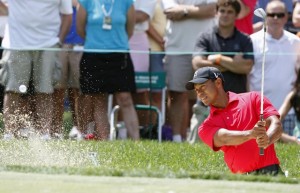 DUBLIN, Ohio — The ferocity of the fist-pump said it all.

When his chip shot from the rough, 50 feet behind the pin, trickled toward the 16th hole and fell in the right edge, Tiger Woods responded with a vicious uppercut more befitting one of his 14 majors.

(PHOTO: Tiger Woods hits his third shot out of the bunker on the 7th hole during the 4th round of the Memorial Tournament at the Muirfield Golf Club in Dublin, Ohio on June 3, 2012.)

“I don’t know what I did,” Woods said of the roundhouse right he said was his best celebration since winning the Chevron World Challenge in December. “I know I got excited.”

The shocking birdie at 16 won Woods his fifth Memorial. He birdied three of the last four holes to tie the day’s low round with a 5-under par 67 and defeat Andres Romero and Rory Sabbatini by two strokes.

It gave Woods his 73rd victory, enabling him to tie tournament founder Jack Nicklaus for second on the PGA Tour list behind Sam Snead’s 82. Twelve of those triumphs have come in Ohio, with Woods claiming seven titles in the Bridgestone Invitational at Firestone Country Club.

It inspired comparisons to his amazing chip-in at 16 in the 2005 Masters, when he defeated Chris DiMarco in a playoff.

But this one may have meant more. Woods was on top of the world that day in Augusta. Now he’s climbing back out of the darkness after a sordid sex scandal derailed his career. It marked his second victory in 10 weeks after a drought of over two years.

This was history of another sort, not just because it was one of the best shots of Woods’ career or that he tied Nicklaus, but because it signaled he’s back.

“I won,” Woods deadpanned when that question came up, followed by a toothy smile. “I’m sure by Tuesday I’ll be retired and done and by the time I tee it up at the U.S. Open, it might be something different. I’ll let you guys figure that out.”

He’s back, all because of a chip that left Nicklaus practically in awe.

Woods wasn’t sure where it ranked among his best. He cited a chip-in for eagle on the 72nd hole of the EMC World Cup in Japan in 2001 as his personal No. 1, even though virtually no one saw it.

“It was one of the hardest ones I’ve pulled off,” he said of Sunday’s feat.

For four rounds, the 16th hole ranked as the hardest at Muirfield. In the final round, it ranked third. Its back left pin placement was diabolical, planned for the southwest wind forecast, not the gusts from the northwest that materialized.

“It made it so the guys couldn’t play it,” Nicklaus said. “Not many guys did. They needed to put the ball in the middle of the green and try to make a two-putt. But guys kept trying to force it back there and kept going to the back of the green or going in the back bunker.”

To that, Woods responded, “Oh, really?”

Nicklaus replied, “I’m glad I didn’t have to play my own hole.”

Even though Woods was coming off a birdie at 15 and trailed Sabbatini by one stroke, there was no inkling of what was about to happen.

Probably the least popular player on the leaderboard, Sabbatini was threatening to pull away. Woods’ expected duel with playing partner Rickie Fowler had blown up early, Fowler’s final-round 84 dropping him from third to a tie for 52nd. Third-round leader Spencer Levin couldn’t handle the pressure on the back nine, with two bogeys and a double bogey immediately after the turn.

To that point, Woods had shown virtually no killer instinct.

“I thought if I played the last three holes in 1-under par that I would get into a playoff,” he said.

He pulled out an 8-iron for the 201-yard par-3 16th, disdaining caddie Joe LaCava’s recommendation for a 7-iron because he didn’t think he could hit it high and soft enough. He wanted as much spin as he could get. With water on the left, he aimed a little farther right. He thought he hit it perfect, but the ball flew too far, over the green, leaving him with a bad lie.

On the chip, Woods said he merely hoped to get within eight to 10 feet of the hole.

“The lie was a little bit marginal, where it brought water into play,” Woods said. “That’s one of the reasons I took such a big cut at it, so if I missed it, I missed it short.

“For it to land as soft as it did was a surprise because (the green) was baked out and it was downhill running away from me. It just fell in. I didn’t think it was going to get there at one point. Kind of like 16 at Augusta, I thought I was going to leave it short and then it fell in.”

Nicklaus said, “He lands the ball exactly where it has to land. Going in the hole was a bonus. I don’t think under the circumstances I’ve ever seen a better shot.”

The only thing missing Sunday was the Nike logo on Woods’ ball positioned perfectly for the camera, as it was in the 2005 Masters.

As Woods strode up the 18th fairway, fathers hoisted their daughters onto their shoulders. No one cared what Sabbatini was doing one hole behind. Woods tipped his cap to acknowledge the cheers. After sinking his birdie putt, he smiled smugly as he bolted for the scorers’ cabin.

The chip. The fist pump. The smug smile. About a week before he leaves for the U.S. Open, all signs point to Woods’ rebirth.