Devils down and heading West 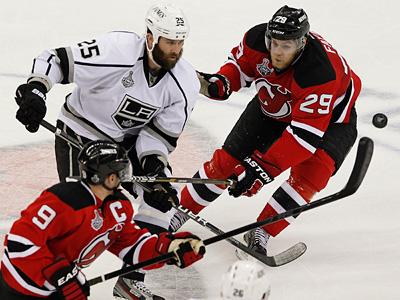 NEWARK, N.J. — The Devils feel like they are every bit as good as the Los Angeles Kings, but just two games into these Stanley Cup Finals, they find themselves in a hole that might be too big to climb out of.

The Kings prevailed again in overtime with Jeff Carter scoring 13:42 into the extra period for another 2-1 victory over the Devils in Game 2 on Saturday night at Prudential Center.

(PHOTO: The Los Angeles Kings’ Dustin Penner and the New Jersey Devils’ Mark Fayne, right, battle for a flying puck in Game 2 of the NHL’s Stanley Cup Finals at the Prudential Center in Newark, New Jersey, on Saturday, June 2, 2012. The Kings’ 2-1 win gives them a 2-0 series lead.)

Carter curled out of the left circle into the high slot to snap off a wrist shot that beat goaltender Martin Brodeur to the stick side.

The Kings, who improved to 4-0 in overtime this postseason, also beat the Devils, 2-1, in overtime on Anze Kopitar’s breakaway goal in Game 1 on Wednesday night. They head to Staples Center for Game 3 Monday night in firm control of the series and just two wins from their first Stanley Cup.

“We’ll travel, get ourselves ready for L.A. and try to do to them what they did to us,” said Brodeur, who made 30 saves, including 10 in an overtime in which the Devils were outshot, 11-3. “We’re still alive and we can try to do something amazing.”

It was the first time since all five games of the 1951 championship series between Montreal and Toronto were decided in overtime that the first two games of the Finals went to OT.

The Devils, who dropped to 4-3 in overtime games in this year’s playoffs, have fallen behind before in this postseason, but never by two games. On the other hand, the Kings are in familiar position. They have headed home up 2-0 after all four of their playoff series this year.

The Kings are 10-0 on the road in this year’s playoffs, equaling the NHL record for most road wins in a playoff year shared by the 1995 and 2000 Devils and 2004 Calgary Flames.

In their history, the Devils have won only one playoff series in which they lost the first two games and that was in the 1994 conference semifinals against Boston. In Stanley Cup Finals’ history, only five teams out of 47 have come back from a 0-2 deficit in the best-of-seven format, but Boston did it last year following Pittsburgh in 2009.

The 1942 Toronto Maple Leafs and 1966 Montreal Canadiens are the only teams in NHL history to come back to win after losing the first two games of the Finals at home.

Although they are facing long odds, the Devils are not about to give in.

“It’s hard, but we’re not going to quit,” Devils captain Zach Parise said. “We’ll regroup and try to win Game 3 and go on from there.”

They’ll have to do a better job of scoring on Kings goaltender Jonathan Quick, who has allowed two goals on 48 shots in the series.

“We’ve got to regroup,” Parise said. “That’s a very good team. They make you work. They play really structured, really defensively. They don’t give you a lot of quality opportunities, but when you do have a couple throughout the game we’ve got to put them in.”

The Devils appeared to be in desperate straits trailing 1-0 through two periods on defenseman Drew Doughty’s goal 7:49 into the game.

Devils coach Pete DeBoer decided to juggle his top three lines in an attempt to generate more offense. The one combination DeBoer kept together was his fourth line of Ryan Carter, Stephen Gionta and Steve Bernier, and that trio came through again to tie the game on Carter’s deflection 2:59 into the third.

Bernier fed defenseman Marek Zidlicky for a right point shot that Carter deflected at the top of the right circle and it bounced in over Quick’s right pad.

Before that, the Devils’ only goal of the series had been the one credited to defenseman Anton Volchenkov when the rebound of his second-period point shot caromed into the net off the left shoulder of Kings defenseman Slava Voynov in Game 1.

Carter’s goal brought the crowd to life and the Devils pressured Quick for the go-ahead tally, but couldn’t break through in the third. Kovalchuk nearly won it for the Devils when Dustin Brown turned the puck over to him in the right circle and he put a shot off the crossbar with just 18 seconds left in regulation.