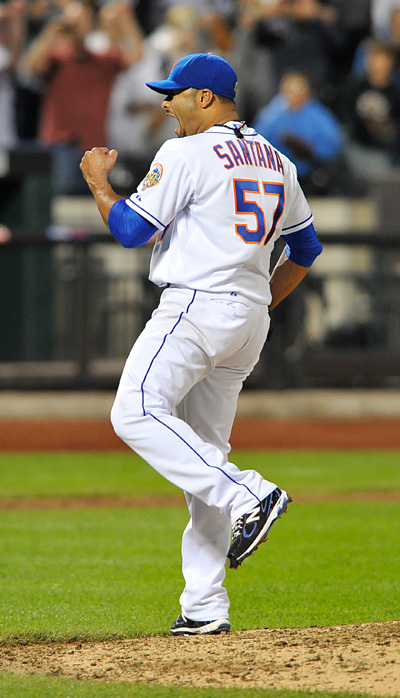 NEW YORK — Carlos Beltran came to Queens years ago planning to play an unforgettable role in making New York Mets history, and he finally did Friday, as a St. Louis Cardinal.

The disputed call on Beltran’s sharp liner past third base and down the line was the difference between Johan Santana’s immortality as the first Mets pitcher to throw a no-hitter in the clubs’ 50 years and just another Mets near-miss. The umpire ruled the ball foul, and Santana soared from there. He retired 15 of the final 16 batters he faced, including Beltran after that call, and completed what no Mets pitcher had in the club’s previous 8,019 games.

(PHOTO: The New York Mets’ Johan Santana reacts after closing out his no-hitter against the St. Louis Cardinals, the first in team history, at Citi Field in New York on Friday, June 1, 2012. The Mets won, 8-0.)

Santana’s gem lifted the Mets to an 8-0 victory in front of 27,069 fans at Citi Field. When David Freese missed Santana’s 134th pitch of the game for a strikeout, the scoreboard lit up with his picture and the phrase, “No-Han.”

“I don’t even think I’ve thrown a no-hitter in video games,” he said. “I never had it in my mind that I would throw a no-hitter. Never.”

Santana (3-2) dominated on a night made for comebacks. There was Beltran returning to Citi Field as an opponent after almost seven years as the Mets’ star outfielder. There was Santana and Cardinals starter Adam Wainwright, neither of whom threw a pitch in the majors in 2011, looking to build on recent success that showed they were not only healthy, but aces again. Santana had a shutout his previous start; Wainwright was one start removed from his first post-surgery shutout.

And there was the Cardinals’ lineup itself. With Allen Craig back from the disabled list and Beltran and Freese back after missing games this week, manager Mike Matheny hadn’t had a batting order this complete in weeks. His eagerness to spur the offense was obvious when he started Beltran in center field so he could fit Craig and Matt Adams into the same lineup.

It was as close to whole as the Cardinals have come in a while, and still they entered the game leading the league in average, on-base percentage and slugging percentage.

Even the Cardinals’ fortified lineup was foiled by Santana’s changeup.

“He’s got that float effect to where you think it’s going to sit in your wheelhouse and the next thing you know it’s out of there,” Freese said. “Our broken bats didn’t fall and our line drives didn’t carry.”

He also had help.

There was a catch, and there was the call.

In the seventh inning, Yadier Molina drilled a pitch toward left field. Outfielder Mike Baxter raced after the liner, caught it in stride, and crashed, full-speed, into the wall. He remained face down on the warning track for several minutes and had to leave the game with a shoulder contusion. But he caught the ball.

Two innings earlier, third-base umpire Adrian Johnson made the call. Batting righthanded against the lefty Santana, Beltran blistered a pitch that sizzled past third and hooked for what would have been extra bases.

Jose Oquendo argued, and during the next batter’s at-bat, Matheny emerged from the dugout to join the disagreement. Replays showed a puff of chalk kick up when the ball hit, a sure sign of a fair ball. Oquendo said he saw it.

He watched a replay but declined to say what he saw.

“It’s not like there’s going to be an asterisk by (the no-hitter),” Matheny said. “That’s the way the game goes. We could tell at the time and thought it was a hit. More importantly than breaking up a no-hitter was a chance for us to get a man in scoring position.”

The Cardinals trailed by two runs at the time, and Wainwright (4-6) had given no indication he wasn’t Santana’s equal. Through three innings, the righty was actually better. While Santana groped for his command and feel of the changeup early—he walked four in the first five innings—Wainwright breezed through the first 11 batters. He did not allow any of them to get a ball out of the infield, let alone get a hit.

“I really was thinking that I was going to throw a no-hitter,” he said.

His bid ended abruptly in the fourth.

David Wright skied a ball into the swirling wind at Citi, and it twisted Beltran around until the ball dropped at the warning track, between the fielder and the wall. That put runners in scoring position and led to a 2-0 lead. Lucas Duda added a three-run homer later to tie a career high with four RBIs, and Daniel Murphy laced a two-run single in the seventh off rookie Sam Freeman to give himself three RBIs and set the final score.

The no-hitter was the first against the Cardinals since June 1990, when Fernando Valenzuela pitched one for Los Angeles at Dodger Stadium. Santana’s no-hitter was the third this season and the eighth against the Cardinals in their history. The Mets have had an agonizing time with no-hitters, falling just shy a few times and cursed by former players who leave to find their no-hitters (see: Nolan Ryan or Tom Seaver, for example.) Now only San Diego is without one.

It all came down to where Beltran’s ball bounced.

“When things aren’t meant to happen, they’re not going to happen,” Beltran said. “He called it foul. I thought it was a fair ball. At the end of the day, one hit wasn’t going to make a difference in the ballgame.”

In the ballgame? No.

But it made history.