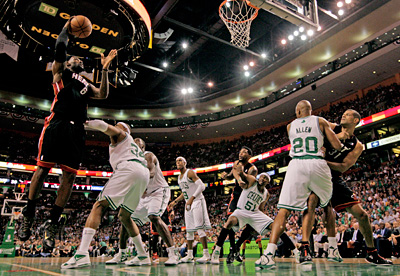 BOSTON — This city and its rocking and rambunctious arena isn’t going to let the Celtics go down without a fight.

Two days after handing the Celtics a demoralizing defeat in the Eastern Conference finals, the Heat watched its 2-0 series lead get cut in half.

(PHOTO: The Miami Heat’s LeBron James, left, shoots in the second quarter over Paul Pierce of the Boston Celtics in Game 3 of the Eastern Conference Finals at TD Garden in Boston, Massachusetts, on Friday, June 1, 2012. )

Next time, the Heat should think about mounting its comeback a little sooner in the game.

Miami has come from behind to win games throughout this postseason, but the Heat spotted Boston too many points in Game 3 of the Eastern Conference finals. Friday’s 101-91 loss to the Celtics was the Heat’s first defeat in six games.

The Heat trailed by as many as 24 points in the second half before it finally showed the weakest signs of life. Led by a late-game shooting barrage by Mike Miller, the Heat got within eight points of Boston but never seriously threatened the Celtics’ lead.

LeBron James led the Heat with 34 points on 16-of-26 shooting to go along with eight rebounds and five assists. He was pretty much the Heat’s only player who seemed even remotely interested in competing through the first three quarters of the game.

Dwyane Wade had 18 points and struggled on both ends of the court. He was 9 of 20 from the field and didn’t attempt a free throw.

As a team, the Heat was 10 of 20 from the free-throw line. It was as if the deafening noise vibrations inside the Garden were strong enough to alter half of the Heat’s attempts from the line.

The Celtics didn’t need a historic effort from their point guard this time. Still, Rajon Rondo was the engine behind Boston’s offense. He finished with 21 points, 10 assists and six rebounds in 42 minutes. He played all 53 minutes of Game 2 but found time to finally take a breather during Friday’s blowout.

A driving layup by Rondo gave the Celtics a 95-82 lead with 4:29 to play, but Mario Chalmers answered with five consecutive points, including a three-point play against Kevin Garnett that momentarily hushed the Garden. Chalmers swished his and-one free throw to cut Boston’s lead to 95-87.

Not counting a throwaway game at the end of the regular season, the Heat has been blown out in four of its past five games at the Garden in the past two years. The Heat’s lone victory in Boston during the Big 3 Era was in Game 4 of last season’s Eastern Conference semifinals. The Heat won 98-90. Despite Friday’s loss, this year Game 4 against the Celtics again presents an opportunity for the Heat to take a commanding lead in the series.

After struggling in Game 2 in Miami, the Eastern Conference’s old guard showed new life on its home court. Bothered by ankle problems at the start of the series, Ray Allen opened the fourth quarter with a driving dunk to give the Celtics an 87-63 lead. He finished with 10 points on 4-of-8 shooting.

Garnett led the resurgent Celtics with 24 points on 10-of-16 shooting. He also had 11 rebounds. Paul Pierce had 23 points and Marquis Daniels had nine points off the bench.

The Heat went 12 possessions without a score between the first and second quarters.

After an efficient start — James scored 16 points in the first quarter, and the Heat shot 61.1 percent from the floor — the offense went rancid with less than three minutes remaining in the first period.

A pair of free throws from James Jones offered the Heat’s only points for nearly eight minutes of basketball. James put Miami ahead 28-22 with 2:38 left in the first quarter, and the Heat went 0 of 10 from the field until James backed down Pierce for a turnaround bank shot with 5:58 left before halftime. Meanwhile, the Celtics raced ahead with a 15-0 run spanning the first two quarters.