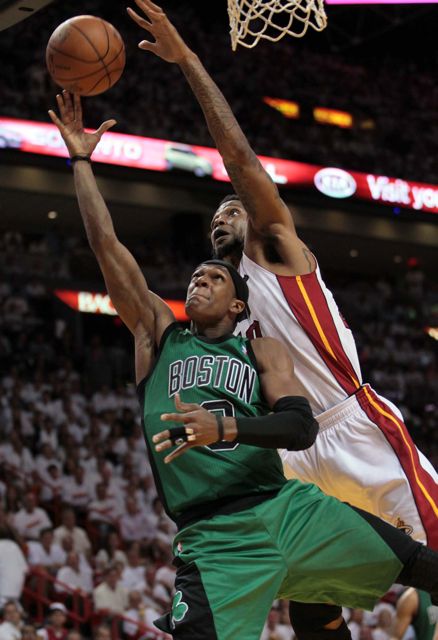 MIAMI — And after all that, after Rajon Rondo’s greatest game, after Ray Allen’s game-tying shot in the final minute, after Boston went up early in overtime, the question after Wednesday is simply this:

Was this Boston’s best punch?

Because the Celtics showed again they have the heart of a champion in the Heat’s 115-111 overtime victory in Game 2 of the Eastern Conference finals. But the Heat showed again what Boston doesn’t this series.

Rondo had a career-high 44 points, eight rebounds, 10 assists and played every second. The Heat came back to win from from their largest deficit (15 points) in franchise history in a playoff game. The Heat missed 16 foul shots. LeBron James missed two game-winning shots in the final minute.

“We had a lot of opportunities to win the game,” he said.

And the Heat still won. They still took the game when it mattered. They still put away the night with big shots from Udonis Haslem and Mario Chalmers and, yes, LeBron and Dwyane Wade.

“There’s nothing easy about it,” Heat coach Erik Spoelstra told his team at halftime.

Easy? Not this night. Not against these Celtics. Not with Rondo like this and Allen hitting that 3-point shot to tie it with 34 seconds left. That led to the issue America loves to debate.

James ran down the lane, caught a pass and went up for a twisting, contested lay-up in a tied game. And missed. And he got the rebound.

So it was double the fun and double the hope as LeBron dribbled the ball at the top of the key, watching the seconds tick down in regulation. He made his move. He found some space. He took a long jump shot at the buzzer.

Not this issue, Heat fans said. Not now. Not with these stakes. But in overtime, LeBron went to the foul line after the Heat’s first possession.

And he missed both foul shots.

Sometimes greatness is just keeping going. After these plays, after these questions, LeBron tipped in a rebound to tie it. He made a pass to Haslem for a dunk. And, just like that, the Heat was on course again.

They needed to be, too. Because for the first time these playoffs there was greatness on the other side. New York never flashed anything until that series was on life support. Indiana had a nice collection of players. But greatness?

For most of this spring, LeBron has been the best player on any court he walks on. When he wasn’t, it often was because Wade was that player. But Rondo was the best player this night.

“The most unpredictable player in the league,” Spoelstra called him.

He was predictably terrific from the start Wednesday: He outscored LeBron and Wade in the first half, 22-15. That was just the start of it, though. He also had more assists then the Heat stars (7-2), fewer turnovers (1-2) and the same number of rebounds (four each).

Beyond Rondo, the Heat had another problem. Wade wasn’t Wade again. Rather, he was the Wade of that awful stretch in the Indiana series. Some of that was Boston’s smart decision to smother him in double — teams when he touched the ball.

Some of it was Wade just missing. Did someone have Tom Crean on speed dial? Their talk helped against the Pacers.

“We’ve got a desperate fight for the next 24 minutes,” Spoelstra told his team at halftime.

Wade came alive and ended with 23 points. LeBron had 34 points and 10 rebounds.

“Stay together,” Boston coach Doc Rivers said at a timeout. “We knew they were going to make a run. Now we answer with a run right here. Right. Here.”

Boston did, too. The old champs played great. They just didn’t play good enough to put away the younger, hungrier Heat team. And you have to ask:

Was this the Celtics’ best punch?