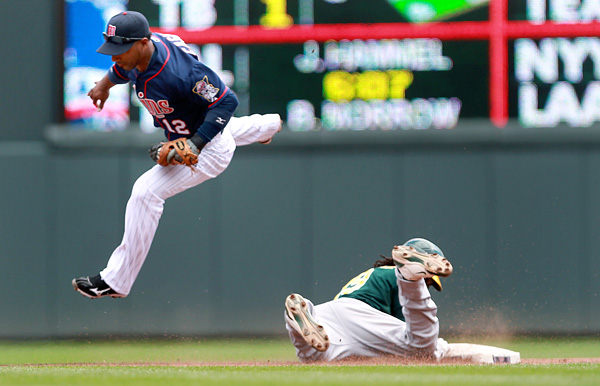 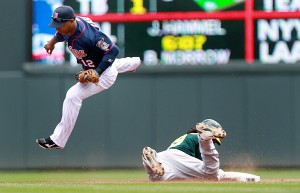 MINNEAPOLIS — Twins lefthander Francisco Liriano admitted Wednesday that the club asked him to go to Class AAA Rochester earlier this month to find his old form, and he declined.

“I wanted to stay up here,” Liriano said. “I thought I could work on some things in the bullpen.”

With that now known, his outing Wednesday against Oakland took on greater importance. He needed to pitch well or he might have faced more pressure to go to the minors.

Liriano responded, throwing more strikes, keeping the ball down and not letting little setbacks snowball into big trouble. He lasted a season-high six innings as he set the tone for the Twins’ 4-0 victory over Oakland that took just 2 hours, 16 minutes to play.

True, the A’s have lost a season-high eight games in a row and fielded a lineup with one starter batting over .240. But Liriano had an outing he and the Twins have been waiting for. He held Oakland to three hits and two walks while striking out nine. His walks were a season low. The strikeouts were a season high. Liriano won for the first time since Aug. 11 of last season.

The Twins entered the season needing for him to pitch like a top-of-the-rotation starter, but he tumbled to an 0-5 record with a 9.45 ERA and was removed from the rotation. Even when he threw strikes, his pitches were not where the catcher was set up.

Liriano maintains that he never lost confidence and that his mistakes were correctable. But his struggles are one big reason why the Twins stumbled out of the gate.

“He worked hard,” infielder Alexi Casilla said. “Every day I come here and he’s already running. You could see him running around the stadium. He deserves to get more wins like (Wednesday).”

Liriano considers Wednesday the day he rebooted his season.

“Just put it behind me and go forward,” he said.

He threw 88 pitches, 51 for strikes (58 percent). That’s his highest percentage of strikes thrown since his second start of the season. Liriano also had a good slider and threw sinking fastballs that hit 93 miles per hour on the radar gun. What pleased the coaching staff was that Liriano battled when he fell behind in the count instead of compounding the problem by misfiring. Pitching coach Rick Anderson had to help him through the third when Jemile Weeks led off with a single. Liriano became distracted with Weeks at first and walked Collin Cowgill.

Josh Reddick lined into a double play. But Anderson still went to the mound to make sure Liriano didn’t get distracted by Cowgill at first.

With catcher Drew Butera at his side, Anderson told Liriano, “If Drew can throw him out (stealing) he doesn’t belong up here. Butera laughed.’ ”

Liriano bore down on Jonny Gomes, striking him out to end the inning. Liriano ended up retiring 11 in a row before being removed after the sixth inning. Next up are the Kansas City Royals on Tuesday, another struggling team Liriano can take advantage of.

“We need him in the rotation,” Twins manager Ron Gardenhire said. “The story has been told too many times about how good his stuff is. He just has to just go out in the field and get it done. Today was a good start, and we’ll work from there.”

Gomes, meanwhile, looked at Liriano’s record and couldn’t believe it belonged to the guy who struck him out twice Wednesday. It reminded him of Liriano before elbow surgery.

“That’s one guy whose stats meant absolutely nothing today,” Gomes said. “I don’t know what that’s all about. He threw the ball like pre-injury. Maybe time off and the bullpen, and we got the wrath of that.”