A’s come up short vs. Twins 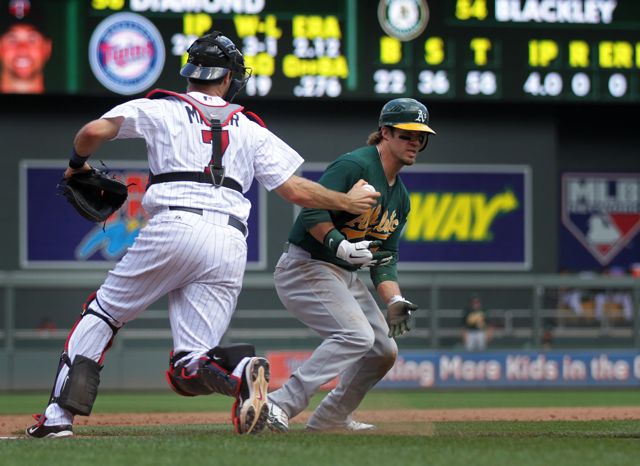 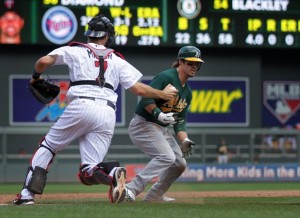 MINNEAPOLIS — At least the A’s changed the script Monday.

This time they actually provided some offense, and with it, hope.

All it amounted to was another frustrating ending, as the Minnesota Twins battled back for a 5-4 victory before a holiday crowd of 34,709 at Target Field.

It marked the A’s sixth consecutive defeat, but this one came with an extra helping of heartache. Oakland had the bases loaded with two outs in the ninth against closer Matt Capps, but Jonny Gomes struck out on three pitches to end it.

How tough are times for the A’s?

The Twins’ winning rally came when they erased a 4-3 deficit in the eighth against rookie reliever Ryan Cook (1-1), who allowed two runs to end his string of 23 scoreless innings to start the season.

Cook’s struggles came after reliever Jordan Norberto coughed up a 3-1 lead by allowing two runs in the sixth.

The A’s got homers from Josh Reddick and Kila Ka’aihue, but they were 1 for 9 with runners in scoring position and left nine on base.

“We had a couple opportunities where we could have added on without a hit, and those end up biting you a little bit,” A’s manager Bob Melvin said.

Coco Crisp was the symbol of the A’s struggles. He went 0 for 5 and is hitting .156. Crisp grounded into double plays in his first two at-bats. He came up in the ninth with runners on first and second and one out and smoked a ball off Capps’ glove. It fell straight down, allowing the pitcher to throw to first for the out as the runners advanced.

Reddick was walked intentionally to load the bases, and Capps retired Gomes on a check-swing third strike.

“I’m at a point where I’m ready to boo myself,” Crisp said.

What can he do to snap his slump?

“Hope, pray, do some voodoo, magic,” he said. “Whatever it takes to get this right.”

Former A’s outfielder Josh Willingham had an RBI double in the sixth as the Twins scored twice to tie the score. Kurt Suzuki drove in Gomes with a single in the top of the eighth to put the A’s on top 4-3.

But in the bottom half, with runners on first and second, Justin Morneau blooped a tying double off Cook that fell just inside the left-field foul line to tie the score. Ryan Doumit’s sacrifice fly put the Twins ahead.

—Yoenis Cespedes, recovering from a strained muscle in his left hand, went 1 for 3 for Sacramento on Monday in his first rehab game. He played left field, an indication that the A’s are considering shifting him from center once he is activated. He is eligible to come off the disabled list Friday.

Cespedes misplayed a few balls before getting injured, and the A’s might prefer Crisp in center. Or, if Crisp doesn’t find his stroke, Collin Cowgill could get more time in center.

—Travis Blackley fared well in his first start for the A’s, holding the Twins to one run and three hits over five innings. The left-hander took the turn of Brandon McCarthy.

McCarthy (strained right shoulder) threw a bullpen session Monday. The plan is for him to start Saturday.

—Third baseman Brandon Inge came off the D.L. and went 0 for 2 with a walk. Anthony Recker was optioned to Sacramento, leaving Josh Donaldson as the backup catcher.

—Reddick has homered in three of the past four games, and his 10 homers in May are the most by an A’s player in that month since Mark McGwire hit 10 in 1995.