LeBron James’ worth goes beyond the stat sheet 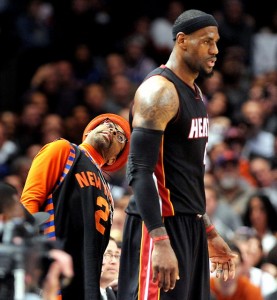 MIAMI — It is perhaps the greatest joy of Dan Craig’s job.

As Miami Heat video coordinator, it is his responsibility to break down every game. Despite sifting through countless hours of game footage, he never tires of watching LeBron James.

In the video room is where Craig is able to see James do things that the average fan may miss.

“I think that’s what makes him great,” Craig said. “He does so much more out there on the court than the average person will see.”

James put together one of the greatest seasons in NBA history, capturing his third regular-season Most Valuable Player award. James put up gaudy numbers, but it’s what doesn’t show up on the stat sheets that has led to his improved game.

This is the first season coach Erik Spoelstra started tracking players by an “activity chart.” It compiles a player rating by awarding a point for each statistical category. The categories include the basics, such as points and rebounds, but also uncommon stats like fouls drawn or block-outs on rebounding.

It was rare for James not to be at the top of the list after any game.

“It’s basically all the tangible things you do that you don’t see on a stat sheet,” Craig said. “It could be taking a hit or not getting a charge [on offense]. It could be a deflection on a pick-and-roll, you get a deflection but you don’t get the steal. It could be everything from a hard close out, running guys off a shot and not necessarily getting a block but taking them off an open shot. He is always at the top of our team’s activity chart at the end of every game. Then again, that just goes back to his high motor.”

Players have long been credited for intangibles, but it’s usually a label reserved for role players. James is hardly recognized for doing the “dirty work” because of his status as one of the league’s elite players.

Still, he’s every bit of Joel Anthony and Shane Battier as he is an MVP.

“I mean, a lot of people only want to pay attention to his offense,” forward Chris Bosh said. “You’re not going to shoot the ball well every night. That’s just a testament to how well he plays. He’s one of the best scorers this league has ever seen, but he contests a lot of shots, he alters shots. He rebounds. Boards can sometimes be just as important as points. That means that was 12 times the defense only got one shot.”

James said an added appreciation of the “little things” was just as important as improved comfort in his new surroundings. He struggled his first season in Miami adjusting to playing alongside Dwyane Wade and Bosh, at times forgetting the importance of “energy” plays.

“The average fan might not notice that he’s picked up eight fouls for the game,” Craig said. “That helps us get in the bonus at the end of the games. You get those attackers attacking and now we’re at the free-throw line shooting. . . . He really just does so much.”

It added up to James averaging 27.1 points, 7.9 rebounds and 6.2 assists, which were all team-highs. He tied Bosh for the rebound lead. It led to James joining the elite fraternity of three-time MVPs, which includes only Michael Jordan, Magic Johnson, Moses Malone, Larry Bird, Kareem Abdul-Jabbar, Wilt Chamberlain and Bill Russell.

“I don’t know if this was my best season, individually,” James said. “I guess the numbers don’t lie. Statistically, it says it was my best in my nine-year career. I just felt comfortable.”

The elevated game now has Miami on the brink of a second straight appearance in the NBA Finals, with the Boston Celtics standing in the way. Game 1 of the Eastern Conference Finals is Monday at AmericanAirlines Arena.

Spoelstra likes his team’s chances as long as the new and improved James continues to show up.

“He covers as much ground defensively as anybody I’ve ever seen,” Spoelstra said. “Offensively, he’s really added new dimensions to his game. That was part of his growth coming here with another dominant ball-handler, pick-and-roll player. He realized he had to add to his game and bring new dimensions.”