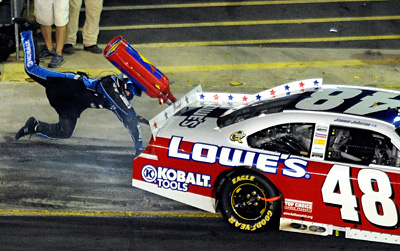 Kahne, who at one point early in the season was in danger of falling out of the Top 35 in owners points and losing his guaranteed starting position each week, extended his career-best Top 10 streak with a victory in Sunday’s Coca-Cola 600 at Charlotte Motor Speedway.

(PHOTO: Brandon Harder, gas man for NASCAR Sprint Cup Series driver (48) Jimmie Johnson, goes airborne as Johnson accelerates from the the pit during the Coca-Cola 600 at Charlotte Motor Speedway in Concord, North Carolina, on Sunday, May 27, 2012.)

A season which once looked lost has suddenly been rejuvenated.

Kahne had one finish better than 29th in the season’s first six races, has roared back with six consecutive Top-10 finishes — a career-best — and his fourth career Sprint Cup Series victory at Charlotte. At one point Kahne admitted he was worried about his ride. Now, he’s back in contention to make the Chase for the Cup in his first season with Hendrick Motorsports.

“This feel really good,” Kahne said from Victory Lane. “It’s so awesome to drive for Rick and Linda Hendrick. For them to make me part of their company – this is just unbelievable to drive for Hendrick Motorsports.

“I think we’ve got seven Top-10s in the row counting the All-Star Race. We’ve made big strides. I have the greatest teammates to work with, which was something I was really looking forward to coming to Hendrick Motorsports.”

“I’ve been doing this long enough to know if you have speed and run front, you’re going to win races,” said team owner Rick Hendrick. “I felt like when the luck would turn for Kasey, these guys would win races.”

Kahne passed Hamlin for the lead on Lap 333 of 400 and while the race remained green the rest of the way, teams still had to make a final round of green-flag pit stops.

Those started pit stops started on Lap 354. During the stops, the gas can got stuck in Jimmie Johnson’s No. 48 Chevrolet he was forced to make a stop-and-go penalty for removing equipment from pit road. That knocked the winner of last weekend’s Sprint All-Star Race out of contention.

Kahne emerged the leader once the stops were completed, but for several laps Hamlin appeared to cut into his lead.

With 30 laps remaining, Hamlin said over his radio, “I gave it all I had.” It was clear Kahne would win barring something unexpected.

“The first 10 laps of the last run, we got to them, but we wore our front tires trying to get around them,” Hamlin said.

“Proud day for our team. Everything was executed great today, the pit calls, getting on and off pit road, the pit crew themselves. We had a very, very solid day.”

Hamlin moved into third in the series standings, 16 behind Biffle and six behind second-place Matt Kenseth.

Carl Edwards was forced to make a green-flag pit stop on Lap 149 for a loose wheel, which left him one lap down. He rebounded to finish ninth.