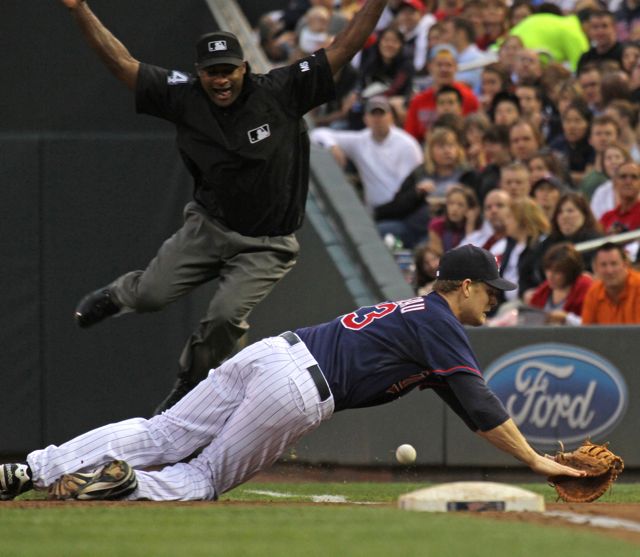 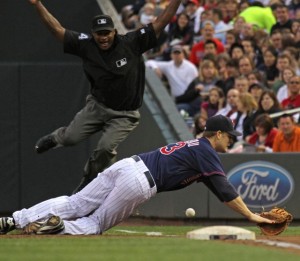 MINNEAPOLIS — It might not have been the best negotiating strategy for Terry Ryan to invite super-agent Scott Boras into the general manager’s suite during the Minnesota Twins’ 10-6 loss to the Detroit Tigers on Friday. Talk about leverage: Boras got to see first-hand just how desperate for starting pitching Ryan’s team is.

Anthony Swarzak, awarded his first start since April 19 after nine increasingly successful relief stints, made a strong case for going back to the bullpen by retiring only eight of the 18 hitters he faced.

(PHOTO: First base umpire Alan Porter jumps out of the way as Minnesota Twins first baseman Jusin Morneau dives for foul liner in second-inning action against the Detroit Tigers at Target Field in Minneapolis, Minnesota, on Friday, May 25, 2012.)

Handed a 2-0 lead in the first inning, Swarzak allowed nine hits, most of them stinging liners, in just 31/3 innings, the third time in 10 days that Minnesota’s starter has failed to complete the fourth inning.

By the time he turned the ball over to another better-in-the-pen pitcher, lefthander Francisco Liriano, Swarzak had put the Twins in a 6-2 hole, too deep even for their rejuvenated offense to overcome.

“That’s a very good baseball club over there, better than their record,” Twins manager Ron Gardenhire said of the Tigers, the preseason favorites in the AL Central who have floundered to a 20-24 record and third place. “We hope they don’t break out here.”

That will be up to Carl Pavano and P.J. Walters, who will start the remaining two games of the series. But the signs weren’t great Friday.

Swarzak, whose ERA this season is 3.06 out of the bullpen but 8.35 when he starts, survived a leadoff walk in the first inning. After Brian Dozier drove in two runs with a first-inning double, Detroit, which scored only six runs while being swept in a three-game series in Cleveland earlier this week, struck back hard. Five of the seven hitters Swarzak faced in the second inning scalded hits, including RBI doubles by Brennan Boesch and Alex Avila, and the Tigers scored four.

Two innings later, Detroit knocked Swarzak out with three more solid hits, including a pair of doubles, for two runs.

And they weren’t done. Prince Fielder, who signed a Boras-negotiated $214 million contract in January, drove in runs with a double off Liriano in the fifth and a single in the seventh. Liriano’s four-run outing ended a batter later, when Dozier allowed a popup in short left field to fall for a run-scoring single.

That the Twins made the game relatively close while the Tigers feasted on their starters-in-exile was due to defense, or Brayan Villarreal’s lack of it. The Tiger reliever, who took over for rookie Drew Smyly in the sixth inning, committed two throwing errors and spoiled a potential double play by failing to touch first base — all in the space of three batters. The Twins took the two-run gift, but that only managed to narrow the margin.

Ryan emphasized before the game that Twins fans shouldn’t expect any out-of-the-blue solutions to its rotation — Pavano, Walters, Scott Diamond, Cole De Vries and Swarzak are the starters until others get healthy or pitch well enough to change their mind.

And Boras? He annually advises some of the top prospects in baseball’s amateur draft, and the Twins own the second pick in the June 4 edition, which likely made his visit more than coincidental.