Wade, with a little help from LeBron, powers Heat to East finals 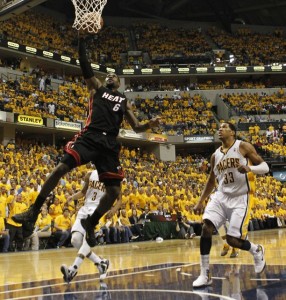 INDIANAPOLIS — Dwyane Wade apparently wanted three days off, and the opportunity to watch the Boston Celtics and Philadelphia 76ers sweat out a Game 7 of these Eastern Conference semifinals.

So he set the tone with 26 first-half points.

And the Miami Heat kept going from there.

With Wade closing with 41 points and teammate LeBron James adding 28, the Heat closed out the Indiana Pacers in six games in this best-of-seven Eastern Conference semifinal series with a 105-93 victory Thursday night at Bankers Life Fieldhouse.

The Heat now will be idle until Monday’s start of the best-of-seven Eastern Conference finals at AmericanAirlines Arena.

The game ended with the crowd chanting, “Thank You Pacers!” as the Heat tied the third-largest comeback in franchise playoff history, from an early 11-point deficit.

With strong support from point guard Mario Chalmers and reserve forward Mike Miller, the Heat were able to endure in the absence of suspended power forward Udonis Haslem, who was forced to miss the game because of his Game 5 flagrant foul on Pacers reserve forward Tyler Hansbrough.

Chalmers closed with 15 points, Miller with 12.

This game had none of the violent moments of Game 5, and was competitive almost the entire way, even after the Heat moved to a 10-point lead at the close of the third quarter.

But the third quarter was key, for the fifth time one team outscoring the other by 12 or more points in the period. This time that Heat outscored the Pacers 28-16 in the third, to run their advantage over the Pacers in the final three third quarters of the series to 85-49.

There were a few tense moments from there, with Pacers power forward David West attempting to maximize his size advantage in Haslem absence. He closed with 24 points, his best effort of the series.

But the Pacers never fully maximized their inside advantage despite pounding the Heat on the glass.

Instead, Wade went off for 20 points in the second period and was supported along the way by timely 3-pointers from Miller and Chalmers, who was limited by late foul trouble.

History was not on the Pacers’ side. Indiana entered 0-8 all-time in seven-game series when trailing 3-2.

With Haslem out, West often had his way against Shane Battier. The loss of Haslem’s offense also hurt. He had scored in double figures in each of his previous two appearances.

The Heat also were without backup center Dexter Pittman, who was suspended for three games for his vicious elbow to Pacers reserve guard Lance Stephenson late in Game 5.

Entering the night, teams that held a 3-2 lead in a best-of-seven series had gone on to win the series 85.9 percent of the time, including 4-0 in the first round this postseason.

James entered with at least 30 points, 10 rebounds, and eight assists in the two previous games, bidding to become the first player ever to do so in three consecutive games.

This time he was merely mortal, leaving the theatrics to Wade.

The Heat could not have asked for more from Wade in the second quarter, when he scored 20 points on 8-of-11 shooting, the highest-scoring period by a Heat player this postseason. His 26 first-half points broke Tim Hardaway’s record for postseason first-half scoring, set in 1996 against the Chicago Bulls.

It was the high for any player in a first-half this postseason, besting the 23 points James had in the opening round against the New York Knicks.

But even with Wade at his slashing best, the Heat went into the intermission down 53-51, with the Pacers using a 10-0 run late in the second quarter to pull back ahead.

James tweaked his left ankle when he fell into a row of cameramen along the baseline on an unsuccessful fastbreak layup in the second period, but returned seemingly without limitations.

Standing that close at the break was victory enough for the Heat, considering an awful start that put them in an early 11-point hole. While the Heat were opening 1 of 7 from the field, the Pacers opened 6 of 7, consistently pounding the ball inside.

The inside action gave the Pacers a 14-3 first-quarter rebounding edge, as they took a 28-21 lead into the second period.

But the Heat already were warming up by then, using a 16-2 surge that started late in the opening period to move to a 34-30 second-period lead.

Miller, who had scored just 10 points in the series’ first five games, provided an unexpected boost by converting three second-period 3-pointers, giving him nine points at the break.

Pacers forward Danny Granger, who severely sprained his left ankle in the second half of Tuesday’s Game 5 blowout loss for the Pacers, opened 5 of 5 from the field, seemingly moving without restriction. He later was limited by foul trouble.

The Heat had only 10 rebounds at halftime, fewest of any team in a first half this postseason.