Wade and LeBron too tough and too much for Pacers 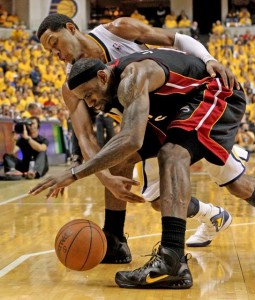 INDIANAPOLIS — This series left the Heat bloodied, stitched and smiling.

When the final buzzer sounded, Dwyane Wade and LeBron James hugged each other in a silent arena. Or maybe they weren’t hugging. Maybe they were holding each other up after carrying the Heat past Indiana this final time.

(PHOTO: The Miami Heat’s LeBron James is fouled by the Indiana Pacers’ Danny Granger, top, in pursuit of a loose ball in the third quarter in Game 6 of the Eastern Conference Semifinals at Bankers Life Fieldhouse on Thursday, May 24, 2012. )

“Are they tough enough?” TNT’s Charles Barkley, among others, asked of these two when the Heat fell behind in this series after three games.

Tough enough. Strong enough. And, most of all, plenty good enough even without their third wheel in the injured Chris Bosh. That’s the final and fitting conclusion after the Heat’s 105-93 win in Game 6 to finish off this series.

The Heat’s dance partner for the Eastern Conference finals will be decided Saturday. But neither will give the bare-knuckled fight or back-alley measure that Indiana did.

What a series this was. What a ride. What a six-game rush of drama, words, threats, emotion, sports morality and personal confrontation right to Thursday’s final game when Dwyane scored 26 points — in the first half.

Wasn’t it just yesterday he scored five points in a game and everyone, including himself, was wondering what happened?

He finished with 41 points and 10 rebounds. LeBron had 28 points, six rebounds and seven assists. They might run into a better team out of the West in the NBA Finals. None have two better players.

But these weren’t the show-stopping, glitz-heavy Hollywood Heat this series in the manner some think them. They lived the Sean Connery line from The Untouchables in this series: “They pull a knife, you pull a gun. They send one of yours to the hospital, you send one of theirs to the morgue.”

Lance Stephenson gave the “choke” sign to LeBron James? Dexter Pittman pole-axed Stephenson to the floor in another game.

They came in undermanned without Bosh and the suspended Haslem this Game 6. They fell behind early, kept their composure and ultimately left no doubt who was the better team.

As they should have. As their talent demands. But down 2-1 in this series they faced the kind of crossroads no one expected and Indiana tried to take advantage of.

From that point, Wade and LeBron took control of the series. Wade averaged 32.8 points in the final three games. LeBron averaged 32.7 points and 11.7 rebounds.

You want the definition of elite players?

There it is. And so there goes Indiana. Tough Indiana. It played the only card it had this series in trying to outflank the Heat’s mind and rough up Wade and LeBron.

Even before this series tipped off, Indiana coach Frank Vogel called out the Heat. “The biggest flopping team in the NBA,” Vogel labeled them. That cost him $15,000 but began storylines that grew richer with every game.

Even Thursday, with Game 6 still hours away, a pro wrestling aura hovered over the series. Heat coach Erik Spoelstra said the Pacers were head-hunting LeBron and Wade all season and the league condoned it.

LeBron said the officiating let Hansbrough stay in the previous game and, thus, get Haslem suspended.

Then the game began and none of that mattered. Wade had the biggest scoring half of his playoff career and, for once this series, LeBron smartly played off him. Mario Chalmers (15 points) and Mike Miller (12) added the necessary support.

“Are they tough enough?”

That was one of the questions for this team as they lost Bosh, went down in the series and could have suffered an unwanted legacy.

“We weren’t going to let that happen,” Wade said after Thursday’s win.