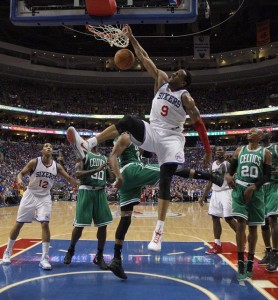 By Bob Cooney, The Philadelphia Inquirer –

PHILADELPHIA — There is another day for the 76ers to play basketball this season, at least one more, as they handled the Boston Celtics in Game 6 at the Wells Fargo Center in front of a crowd fueled by an appearance by Allen Iverson and strong, gutsy play from the home team.

(PHOTO: The Philadelphia 76ers’ Andre Iguodala (9) dunks against the Boston Celtics during the third quarter in Game 6 of the NBA Eastern Conference semifinals on Wednesday, May 23, 2012, at the Wells Fargo Center in Philadelphia, Pennsylvania. The Sixers won, 82-75, to force a Game 7.)

Because of Wednesday night’s 82-75 win, the teams will play the deciding Game 7 on Saturday in Boston’s TD Garden at a time to be determined.

“That was a gutty win to say the least,” said 76ers coach Doug Collins. “We had 33 points at halftime with five missed free throws and nine turnovers. It wasn’t a masterpiece. In the second half we took away a lot of those dunks and layups. Second half, we only had three turnovers.

“The one thing I wanted us to do was keep pushing.”

The Celtics appeared to have nothing left in their beat up old gas tank. Heck, the paint appeared to be peeling, the body rusting and the interior torn, too. Ray Allen hobbled. Paul Pierce labored, and the main enemy Kevin Garnett seemed to fight most of the night was Father Time.

Still, they found a way to keep up with the younger 76ers, probably because for the most part the Sixers decided to stay in the slow lane with the Celtics, putting along during most of the game.

Whenever the Sixers tried to pass, the Celtics would cut them off. And it was the slowest part of the game in which the Sixers struggled most as they converted only 17 of their 28 free throws.

Until Wednesday, the talk of the aged Celtics had been mostly that — talk. They had shown little sign of their significant years catching up to them, fighting the younger Sixers throughout. And they did the same thing in this game. But when the legs needed the extra lift on a jumper or a quicker shuffle to stop a penetrating Sixer, it just wasn’t there.

Pierce (24 points) and Garnett (20) were able to combine for 44 points, but they both had to reach way into their Hall of Fame skills to find them. Garnett did all of his damage from outside of 15 feet, a place the Sixers would prefer him to be, and Pierce used his craftiness to get most of his points from the foul line.

In the fourth quarter, the Sixers got to most of the loose balls, corralled offensive rebounds and speedily worked give-and-gos for easy baskets. They were fresher, faster, quicker and mostly younger.

“We didn’t have it,” said Boston coach Doc Rivers. “They had a lot of energy, got a lot from the building. They outplayed us tonight. Fortunately they missed free throws. But we had a lot of empty possessions. We played random a lot. We never established Kevin. Even though he had points, it was just not the type of points we need from him.”

“He’s been playing so great in this series. We just didn’t want him to make easy shots,” said forward Elton Brand. “He had 20 points but 20 shots. The post ups, the dunks, we wanted to take that out of the game.”

They also did their business with Pierce, particularly Andre Iguodala. Pierce fiercely had to fight just to get open and when he got the ball he was nearly spent from doing so. It was only through terrific craftiness that he was able to draw fouls and get to the line.

“I thought we were fresh at the end of the game,” Collins said. “Lavoy (Allen) came in with Elton Brand and did a good job with that. Lou (Williams) gave us great minutes tonight. We just wanted to stay in the attack mode.”

They did. And if there’s any hope to grab that all-important Game 7 on Saturday, they’ll have to do it again.

Jrue Holiday led the Sixers with 20 points and dealt six assists. Brand gutted through a sore neck and shoulder for 13 points and 10 rebounds, while Iguodala and Turner had 12, and Williams chipped in with 11.

Defensively, the group held Celtics guard Rajon Rondo to just nine points and six assists and limited Boston to 26-of-78 shooting (33.3 percent) from the floor and turned them over 17 times. And with starting two guard Avery Bradley sidelined again due to a shoulder injury, there weren’t many able bodies for Rivers to look to.

“It’s what we have,” Rivers said. “Avery is a great defender, but I can’t worry about (not having him). The penetration hurt us, and the (isolations), and they were picking who they wanted (to isolate). That’s what I would do. I know Doug well. I’m going to give him a call and say, ‘Listen, none of that.’ We have to do a better job of helping those who can’t keep guys in front of them.

“They’re athletic, young, and they’re very fast. We knew coming in this would be hard. They have a quickness advantage, and we understand that.”

And that advantage appears to be growing with every minute of every game.