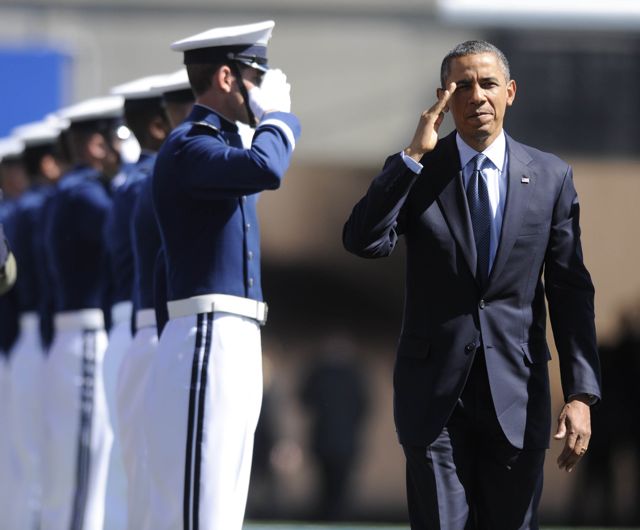 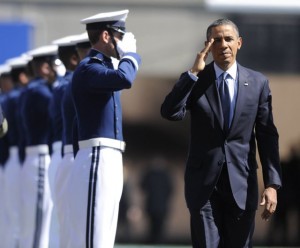 COLORADO SPRINGS, Colo. — President Barack Obama pushed back against the idea of U.S. influence being in decline — and against Republican criticism of his stewardship — telling the Air Force Academy’s graduating class that around the world “there’s a new confidence in our leadership.”

Republican critiques hold otherwise, suggesting that Obama has “led from behind” in international efforts, cut the military and responded weakly to the rise of contending powers.

But as he set off Wednesday on a two-day western tour, Obama used the commencement address to make a forceful argument for a policy that downplays unilateral American action in favor of partnerships with other countries, one that maintains “military superiority” even as it welcomes “the rise of peaceful, responsible emerging powers.”

The speech fit into a pattern in which Obama has tried to identify himself with optimism — with a “rise to the moment,” with the “future” and “faith” — a line of his re-election argument that implies that the other side is embracing decline.

“If we meet our responsibilities, then — just like the 20th century — the 21st century will be another great American century,” Obama told the graduates.

So far this year, foreign policy and defense have taken a back seat in a campaign that has focused overwhelmingly on the economy.

Mitt Romney, Obama’s likely Republican opponent, mostly has remained focused on economic issues. On Wednesday, he spoke about education reform. Richard Williamson, a former diplomat who is a Romney adviser, said his candidate plans to keep focusing on the federal government’s “mind-numbing” deficits as well as “the consequences to our ability to fund an adequate defense.”

But when the debate has turned to foreign affairs, Republicans have accused Obama of being too willing to accommodate other countries and not being a forceful advocate for U.S. interests. The criticism has focused on the metaphor of “leading from behind” that first surfaced in words an Obama adviser used in a New Yorker magazine interview. Since then conservatives have repeated the phrase often, accusing Obama of abandoning U.S. leadership.

Wednesday, Obama obliquely sought to rebut that idea, reminding the graduates of Libya. The U.S. took part in “preventing a massacre in Libya with an international mission in which the United States, and our Air Force, led from the front,” he said.

He also briefly addressed budget issues, saying the military would be “leaner” in years to come, but “as commander in chief, I will not allow us to make the mistakes of the past,” a reference to steep postwar budget cuts that hampered military readiness at the end of previous wars. “There are still terrorists who seek to kill our citizens. So we need you to be ready for the full range of threats.”